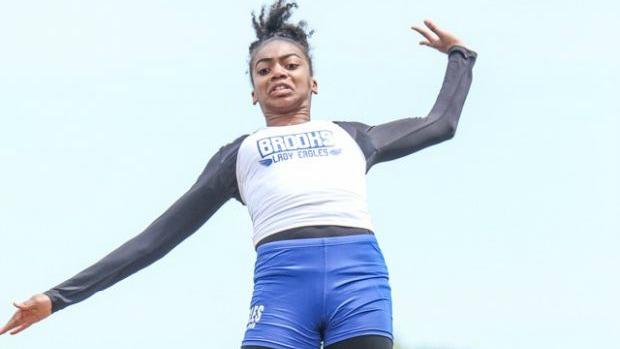 Season outlook: The changing of the guard occurred last year when Imani Carothers replaced previous stallion and state champion Raynesha Lewis of Cahokia. Carothers was actually dominated going undefeated indoors and outside against state competiton (only loss was a 7th place finish at U of Kentucky HS Invite). Carothers rates as the second best jumper in the state and #19 in the country all conditions with  a 19-8 leap. Carothers has ambitious goals like this: "I want to jump 20-5." With the talent that she possesses it is possible. Another face to watch is Erika Furbeck. She should be a cause for concern after going from 17-9 to over 19-feet in one year. Furbeck's second place finish at state was just a half-foot in the rear. Furbeck placed in the 100 which means she has good runway speed. Speaking of good runway speed is Mariya Hudson. Hudson was once a state champion threat but since 2015 she has only contested the event in mid-level invitationals. Don't be surprised if Hudson is called back into late season state series action if needed. Additionally, despite classification changes of a few top athletes and only five state finalists back, this event is deep and filled with tough emerging jumpers.

Season outlook: A new state champion and a deep cast of rising vaulters awaits this event. First, Ali Munson moves back up to 3A. Among those hopefuls who look to be on top this season is Aliyah Welter. She becomes the top returner in terms of height clearance. The only drawback for Welter is that she is not a full time vaulter. She is one of the top gymnasts in the state and plays basketball. Welter also competes in both hurdle races and contributed to an all-star relay. Josie Held got over the hump to after a loss to Welter at last year's Monticello Sectional to earn a state runner up finish. Along list of 11-foot jumpers and 10s will fight to get near the 12-foot range this season.

Season outlook: This event has nowhere to go but up. It is as simple as that. There are only two state finalists back and the top returner Shaniya Howard's 5-6 is not all that impressive. No disrespect intended but hopefully we will see someone in the 5-8 or 5-9 range. The good thing, though, there is a long list of 5-2 jumpers in position to move up.