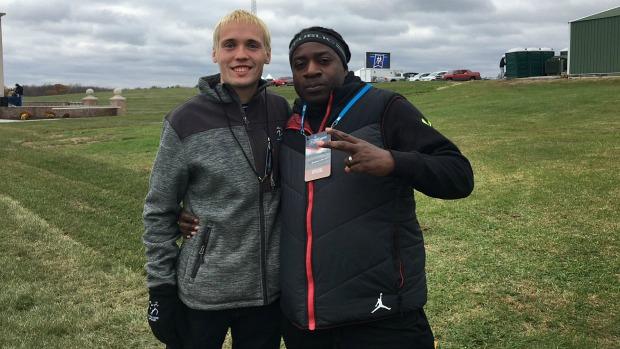 The men's race went out more methodically than the women probably because of weather conditions and respect for three-time defending Edward Cheserek of Oregon. With the cold and high winds it would not be for anyone to go out and try to be a maverick. The first kilometer was not slow as a group crossed in 2:50. The pace would begin to stall shortly there after even with Cheserek and several of the meet favorites in the front pack.

The first mile and 2k slowed to a pedestrian 4:49 and 6:04. From our lead vehicle we saw several athletes giving Cheserek some pokes and elbows. They were sizing him up and annoying him. It was too early for Cheserek to put on a surge and remove himself from the pests. I firmly stand by the fact that annoyance can knock you off your mental game. Meanwhile, Justyn Knight (Syracuse University) stayed low key through the race but moving up. I have never seen such a big cluster at the halfway point. There must have been 60 guys who hit the 5k post in 15:20. That is slow by elite college standards. I was starting to get hype because I knew this type of race would favor Cheserek. Patrick Tiernan, last year's runner-up from Villanova University, was stalking the field. Tiernan is a posing figure standing over six feet tall. He remembered the beating he took last year from Cheserek at the 7k point which brought us all here today. The reverse happened on this occasion. It was Cheserek, Knight, and Tiernan who broke away from the pack just before the 8k. Cheserek would fall back soon after leaving just Tiernan and Knight to battle. I saw how Knight won the Wisconsin Invite with a devastating kick a month ago. But with 800 to go he did not have it. Maybe the 4:17 last mile was the trick that neutralized Knight. Tiernan steamed home for the win in 29:22 ahead of Knights big personal best 29:27. The battered champion kept his head high and finished third ahead of his friendly foe Futsum Zienasellassie (Northern Arizona) by almost two seconds. Zienasellassie is the golden boy of Indiana having won three state titles on this course. He was grouped with his family during the aftermath just ahead of celebrating with teammates who would be announced as national champions. Futsum and his coach Eric Heins both went out on top in their last collegiate appearance. There is nothing like cross country at the end of the season.