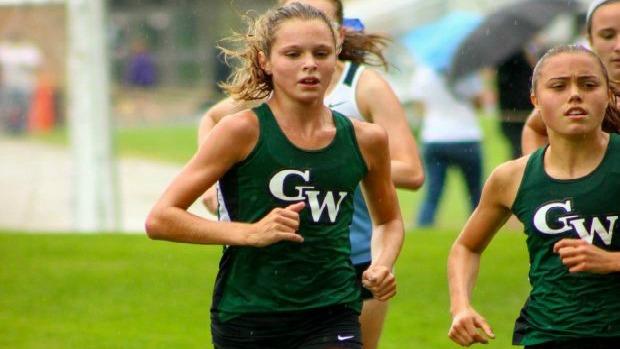 Glenbard West has the hot 1-2 step-

There have been other great girl duos in IHSA history. These are facts. But has there ever been as a good duo as Lindsey Payne and Katelynne Hart this early? After three weeks of racing one would be pressed to find a better tandem as the junior and freshman. At last weekend's Lake Park "Harvey Braus" Invitational, Payne and Hart overwhelmed the competition in rainy and sloppy conditions. Their hard earned efforts produced 16:49 and 16:51 respectively. This Saturday in the one race, winner take all affair look for the Hilltoppers duo to go 1-2 for the second straight invitational. It is not a mystery that Glenbard West is the nation's 19th ranked team. Coach Paul Hass knows how to maneuver his tremendously talent. The team has pieced together 1:33 and 1:29 scoring splits in its two invites. This is great news when you consider the Hilltoppers have arguably the two top runners in the state. Add in #3 runner sophomore Katie Hohe as the bridge between top and bottom of the team, this weekend could be a laugher

There will be more teams than you can count-

It has been said that Detweiller Park is one of a few parks in the country that can handle tremendous traffic. The starting list has up to 70 teams slated to compete. This means over 500 runners will be racing at the same time. It can be frustrating at times trying to figure out who is who when there are three classifications competing together.

Geneva will take its shot at trying to unseat Glenbard West. This may be a tall task since they don't have a true front runner to offset Payne and Hart. The Vikings produced a solid 53-second scoring split at Wauconda last weekend. They would need all scorers to zone in on the Hilltoppers #3 runner to have a shot at victory.

3A standout teams Neuqua Valley, Stevenson and Grant will fight for a top four trophy position. Palatine coach Joe Parks has downplayed his team on the scene so far. However, he has quietly gotten the Lady Pirates running well. Among the 2A class Mahomet-Seymour will fight against host Peoria Notre Dame, St. Ignatius, and a few others in round one. It will be important for these teams to enhance their resumes for what lies ahead later in the season. Watch for Class A top ranked St. Joe Ogden to hold its position among the small amount of small teams. SJO could finish in the top 10 overall. If they do, then their statement would be a very strong one this early in the season.

The individual race should be a fast one of course with Payne and Hart leading the way as indicated earlier. But don't forget that Isabelle Sparreo is entered. The junior Sparreo has been lights out since winning the Palatine Invitational last year.