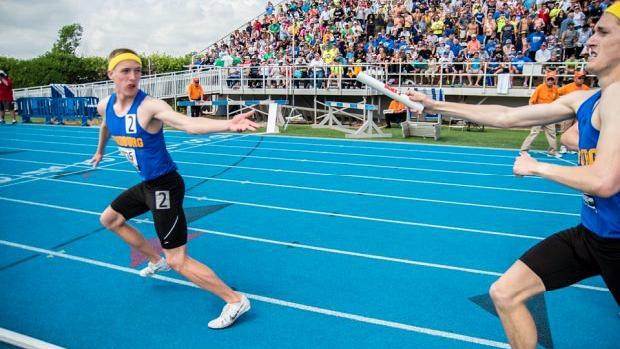 The relays are a risky business but at the same time can yield high rewards. They are fun to watch as well can be big point gainers for teams who are powerful. The Torpy twins (Chris and Sean) demonstrate a successful baton exchange on during the anchor leg of the 4x800 relay. (Colin Boyle photo)

Outlook: The 2006 Jacobs 4x800 state record of 7:40.02 looked like it was in jeopardy last year, and although the record remains safe, a bunch of teams came close and could possibly come even closer this year. Projecting the cross country team favorite this year was pretty easy- Sandburg came in a huge national favorite and held serve through the end of the year by winning their first ever state cross country championship. This year, the favorite is just as clear: make way for the Eagles of Sandburg.

Just one finalist from last year's race returns all four runners, and that is defending Champion Sandburg. Seniors Tom Brennan, Brandon Lukas, Sean Torpy and Chris Torpy ran a strong, evenly split race with an average 1:56.01 split to win in 7:42.03. Sandburg finished 4th in 2012, 3rd in 2013, 2nd in 2014 and 1st in 2015. They will not finish 0th in 2016 but they have a strong chance to go back-to-back and improve on their strong time. The Eagles pack running has only been more refined over the course of their cross country success and it surely will translate into success on the track.

You may look at last year's results and think you have seen those times somewhere else- well, the same teams finished 1st and 2nd. Lyons is our 2nd returner, and although they graduated Alex Lima and Ben Gawthrop, they return some big guns and very new weapons as well. Connor Madell and Vince Zona are both sub-2:00 athletes and All-State XC finishers. Super sophomore Danny Kilrea is new this time around and can provide a much needed boost for a team that traditionally puts very good 4x800 squads on the track. The Lions will likely then look to Matt Begeman or Alex Pall to seek another podium finish.

Lake Zurich is notable for their junior trio of Matt Pereira, Brian Griffith and Kyle Griffith, all of whom were all-state in cross county and all of whom return from the Bears' 4x800m team last spring. LZ ran a solid 7:51.23, which is good enough for top 5/6 on most years but only yielded them 9th in 2015. Lake Zurich can be very dangerous if they get solid help from runners such as Matt Milner, Kyle Fitzgerald, or Patrick Burns. It will be interesting to see how Lake Zurich employs their runners, as this team presents a good chance to gather a state championship, but Pereira also would compete well for a 3200m title. Stay tuned and keep a close eye on the progression of Lake Zurich during this track season, especially since their progress will likely be indicative of their potential in the 2016 cross country championship.

Now that Ty Moss and Zac Espinosa have graduated, assistant coach Paul Vandersteen will have to look elsewhere for leadership on the relay team. He likely will find it in Isaiah Robinson, a 49.14 400/1:55.28 800m guy in the same mode as Moss- made a name for himself at the AAU Junior Olympic Games. If a recovering Connor Horn chooses to run this relay as well, the Wildcats can look to their indomitable depth and produce a couple more guys to produce yet another podium finish for an already storied 4x800 team. Scott Anderson, Jack McEneaney and Aidan Livingston are distinct possibilities.

These are surely not the only teams to be competing for the title. Barrington is a recent champion and finished 3rd last year. York produces 800m runners at rates unmatched in the state of Illinois and could be anchored by Charlie Kern. Oak Park-River Forest returns a plethora of sub-2:00 runners who all ran well in cross country. Prospect's surge at the end of the XC season could be indicative of great things to come, especially for Karsen Lecomte and Sean Sanaghan. Chicago Whitney Young is another extremely young and talented team with a gaggle of good 800m runners. Depending on the trajectory that Clayton Mendez takes (whether 3200 or another event), Whitney Young could be a scary good dark horse in this event.

Outlook: This relay is in particular is hard to predict because one false move is all it takes for a cohesive unit to go bad. Some greats and/or historic would be teams on paper don't make it to the promise land. We have all seen kids standing in their lanes waiting to receive a baton and crying because a teammate drop it... there were six teams that broke 42.00 (add former 2A power Galesburg) which showed a lot of short speed in the state. But at the same time seven of the nine state finalist units graduated at least two legs. Newcomer Galesburg may lose three if superstar senior Josh Eiker decides to concentrate on the individual events.

Bartlett is the only team that made the state final with three legs returning. The Flyin' Hawks lost their top man Bryce Petty to graduation. AJ Santori will need to step up in a new role.

East St. Louis Seniors came into the state meet as one of those units that broke 42 seconds and appeared poised to challenge for a title. A mishap with one of the legs coupled by a sluggish start in their preliminary round cost them dearly. Thankfully all four Flyers vets return including some new new talent.

Belleville East is led by 110HH champion senior William Session will be ready to fly fast. The emergence of Quantavius Alexander may lead the Lancers to big things this season.

There were a slew of teams that were on the verge of breaking out last May but fell short. Look for Harvey (Thornton) to get back to their customary place among the sprinting elite. The Wildcats ran 42.20 last year bring back three legs. Collinsville should be one of the top units in the St. Louis metro area once again after clocking 42.34 and returning everyone. There are some who feel that Skokie (Niles North) can make a run for state supremacy on the strength of senior football star Barrington Wade. Add Lockport and Geneva in there as well.