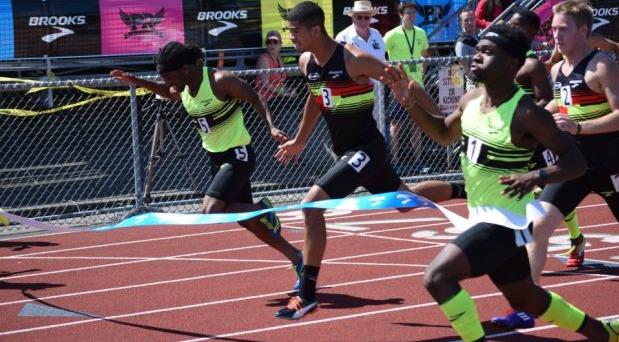 Only time will tell if the class of 2016 is indeed one of the best in the Prairie State history. One thing for certain it contains some of the best student-athletes in the history Illinois in terms of performance. Let's take a moment and look at some of the future commits. 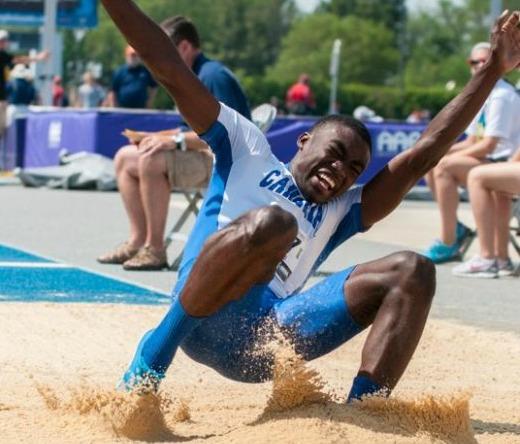 Ja'mari Ward (Cahokia): The most decorated horizontal jumper in Illinois history still has one more season in high school to terrorize the jump pits and his competition. Ward enter 2016 as the best leaper in the country. He rates #1 all-time indoors in the triple jump (51-7.75) and long jump (25-7.25)- both marks won the 2015 New Balance Indoor Nationals and held up as US#1's. Ward continued his mastery outdoors with state titles in both jumps and produced legal marks of 25-6.5 (+1.8) and 51-11 (+1.6)- US#2 and US#1 respectively. Ward will enter the University of Missouri on a mission to destroy the Tigers school records, which are incredibly within his personal bests. Cahokia head coach Leroy Millsap stated that Ja'mari's best event is the long jump and he feels his pupil will have an opportunity to make the US Olympic team. "The goal is for Ja'mari to reach 27-feet," he said recently. That ambitious goal would certainly make the team and place him in medal contention. The triple jump is an event that Ward's loves but a project for the time being.

Josh Eiker (Galesburg): This kid has been like a traveling salesman over the past two years taking his talents to whatever quality meet that he can get into. The results have been very profitable for the University of Illinois commit who moves into the major leagues known as Class 3A. This wonderful opportunity will once and for all allow Eiker to battle the best individual competition in the state when the IHSA series arrive in May. What should we expect from Eiker this season? His personal best in the 100m is 10.42 nwi but the legal mark of 10.57 stands for now. We could see a time in the 10.3s this season and the 21.05 (0.0) should be destroyed at some point in 2016. Anthony Moorman (Roselle Lake Park) blazed a still standing 20.89 state meet record in 1997. That performance is seriously in danger. Eiker has discussed adding the 400m to his plate. He dabbled in the event just a few times in 2015 but produced a solid 48.39. The sky is the limit for this blue chip athlete who could wind up being an all-time great in Champaign down the road.

Jon Davis (Oakwood): The top distance runner in the state has a personality that is hard as granite stone. He knows that is the way it has to be when you come from a tiny 1A school that normally does not attract attention statewide or nationally. Davis set up his senior year with a solid junior that included three state titles (xc, 3200m, 1600m) and personal bests of 9:05.23 (1A state meet record) and 4:09.93. And of course is the sensational attempt to break the immortal Craig Virgin's 13:50.6 state cross country record last weekend in Peoria. Davis ran well but fell a little short and took home a nice consolation prize of 13:59.3. He has now moved on and is ready to take on the nation's best. First up is Nike Cross National Midwest Regional in Terre Haute, IN where he will face the best competition of the year. Later on in the month will be the Footlocker Regional in Kenosha, IN and another opportunity to head back to San Diego to get revenge on a disappointing 37th place. Davis was incredibly sick last December but he never told anyone outright. "I like to think I can place in the top three if I get the opportunity," he said earlier this season. The high school competition nationally has improved so much over the past ten years that a top three finish in a national championship race whether NXN or Footlocker would be considered a great feat. 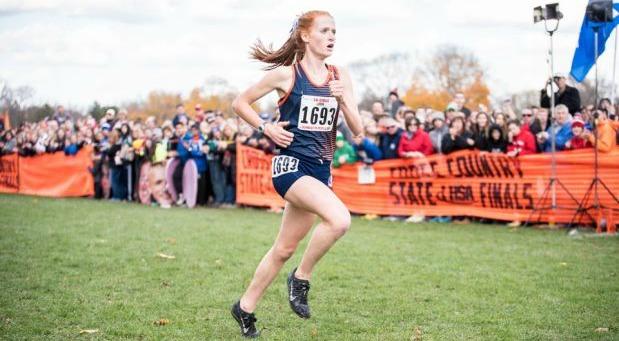 Judy Pendergast is the best to ever do it at Detweiller Park when she became the first IL school girl to break 16:00 enroute to a mind boggling 15:53 (Colin Boyle photo)

Judy Pendergast (Naperville North): Out of the north like a winter polar vortex has come Judy Pendergast over the past two racing seasons. She took her first state title on the track last spring in the 3200m running a solid 10:34.55. If you can forecast the amazing US#1 15:53 three-miler she ran to smash the state Detweiller record, then the track world is in big trouble. But there is still a lot of harrier running to go for Pendergast who is slated to run NXN and Footlocker races. The nation is going to get a birds eye of the superstar in the making real soon.

-Michaela Hackbarth and Karina Liz won state championships in the 800m last year. They both return as the leading time leaders with 2:11.24 and 2:11.45 respectively. They will be future teammates at the University of Missouri next fall. Before they head off to become Mizzou Tigers they will aim to crack the 2:09 barrier this spring. Both ran well during the cross country season and both girls have the necessary speed components to get the job done.

-Lindsay Graham did not compete this fall due to injury. However, that did not stop her from pledging the allegiance with Furman University. If all goes well for the 2014 3A xc champ, she will be a threat to Judy Pendergast on the track. Graham actually has the fastest 3200m time in the state entering this season at 10:22.53i. If healthy we could some of the fastest times ever ran during the track season.

-Heath Warren actually has a faster 1600m time than Jon Davis at 4:09.89 and he loves the track. The University of Oklahoma will be getting a gem. Look for Warren to reach down and run under 4:08 this spring making him a prime target for national honors.

-Willam Session got over the hump last spring with his first state title in the 110HH burning the track in 13.91. The gifted Session indeed comes from a strong lineage as his late father Rodney Session starred at E. St. Louis Sr. in the late 1990s and his older brother Korrion Session (Cahokia) who placed second in the same short hurdles race in Class 2A. William committed to Indiana University which has a rich history of producing top notch hurdles. Session made it known that he plans to go under 13.6 this season and that is certainly possible under the training of Track My Speed Track Club.

-Chris Thompson put down a 47.99 personal best over the summer. He was an unknown last year at this time but built a strong resume through the guidance of some great coaching including Abe Jones. The sky is the limit for Thompson who will be heading off to the University of Iowa and Head Coach Joey Woody. Thompson will have the opportunity to run near 47-flat in 2016.