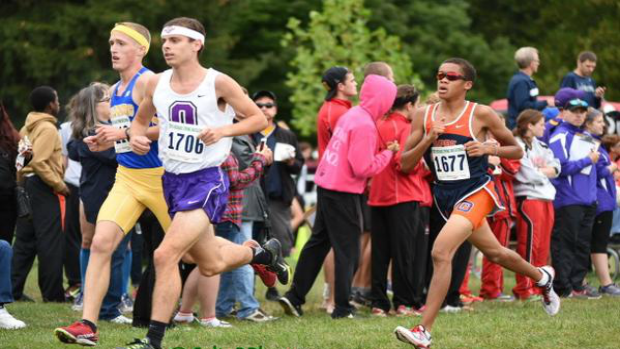 The so-called battle "Goliath vs. Goliath" between #1 Orland Park (Sandburg) and #2 Naperville (Neuqua Valley) was anything but that as Sandburg slayed the competition with 51 points. The highly scrutinized Eagles scoring pack was issued a challenge by their ultimate leader head coach John O'Malley. The challenge was for them to step up without one of their top runners senior Chris Torpy. Step up they did led by a furiously aggressive start led by twin senior Sean Torpy. Sean responded with a sizzling personal best 14:27 and a third place overall finish. The scoring split was even more impressive (32 seconds). In the process, the Eagles may have found a future star in sophomore Dylan Jacobs. Jacobs ran well unlike an underclassman is supposed to in crossing the finish line in 14:36.

Neuqua Valley did not run bad despite trailing Sandburg the entire race. The Wildcats finished a solid second scoring 81 points. Head Coach Paul Vandersteen was pleased with his team's effort and added: "it's only September, we have a long way to go." York took third (155 pts.) in their opening invitational of the season. "We ran OK today," said assistant coach Jim Hedman. "We beat the kids up pretty tough this week with hard workouts," he stated.

The individual race was incredible and went exactly the way Jon Davis (Sr., Oakwood) wanted. He hit the first mile in approximately 4:39 with several standouts including Torpy, Irwin Loud (Jr., Oak Park-River Forest), and Matt Pereira (Jr., Lake Zurich). The pace stayed true through two miles in 9:34 as Davis took on who ever was left in the battle. He pulled away from Loud with less than 400m to go unleashing a devastating kick that brought him home in 14:10. Davis' goal coming was to run 14:10 and establish a meet record. It is safe to say that he collected on both goals. Loud finished runner-up in a personal best 14:20 followed by Torpy, Pereira, and Connor Horn (Sr., Neuqua Valley) who closed out the top five running a personal best 14:31.