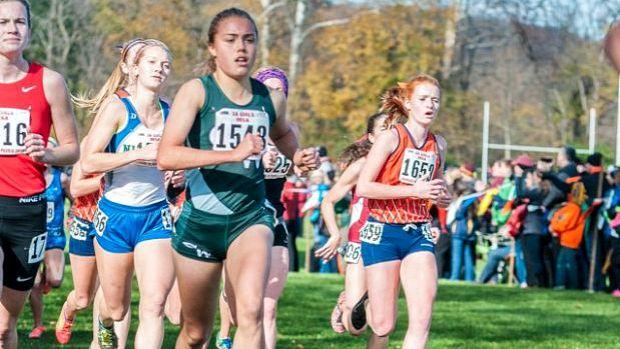 It is going to be a long day at Detweiller Park but a good one if you are a fan of high school cross country. The second installment of the Detweiller trilogy series known as the Richard Spring or Peoria Notre Dame Invite will pit a bevy of schools against each other.

Glenbard West has the full arsenal-

Unlike the boys side of the ledger, the girls favorite is a little bit more defined. Glenbard West is the favorite here based on what they have accomplished so far in the season's early going. They only lost a close decision against a real good Minooka team by three points several weekend's ago. The Lady Hilltoppers will of course have some quality competition ready to whack them from getting the first place trophy. It will be hard though. Sophomore Lindsey Payne will give her team the lowest point possible and if the 2-5 scoring pack can produce another 54 second or better split, it will be curtains for their foes.

Palatine was smarting after getting knocked off their #2 pre-season ranking ledge. The Lady Pirates went back to the lab to get some quality training in. Hopefully, their scoring pack will be a little tighter on Saturday. Senior leader Kelly O'Brien is one of the best overall distance runners in the state. She will be a front runner from the gun.

Geneva won the Wauconda Invite last weekend with ease. Coach Bob Thomson indicated that his team is comparable to Batavia who placed second last weekend in the 3A division and beat Naperville North. If this is true the team race will be tighter than some realize.

Watch for the complementary teams such as Wheaton-Warrenville South, Schaumburg, and York to move the meter against a deep field. 2A powers Chatham-Glenwood, Mahomet-Seymour, and Deerfield will be in the field. 1A will see its #3 team Petersburg-Porta battle #5 St. Joe-Ogden between the lines.