For the first time in MileSplit Illinois history, we will have live coverage at three different venues simultaneously. That's right, this Saturday there will be a team blanketing the state: Granite City Invitational in the southern sector, The John Kurtz Early Invite at Fenton as well as the Hinsdale Hornet-Devil Invitational. MileSplit Illinois will bring top notch footage from all three sites.

The inside scoop: You will not see it often, not even with friendly rivals in that they will come together and share something. Well, the 35th Annual Hinsdale-Hornet Invite is just that- a friendly joint invitational which happens to be a top notched meet unrivaled by any animosity. It's a true partnership which in turn makes for one of the best run and most popular meets in the country.

The boys start things off in this title bout and the two-time defending state champion host Hinsdale Central will look to make a big statement. The Red Devils beat Neuqua Valley by 16 points in what then was considered a draw. This time they are considered clear underdogs having only returned three state meet runners. Neuqua Valley on the other hand are absolutely loaded with senior Connor Horn leading the way. He is a true front running after completing a great last school year. After Horn will be a tough supporting cast led by Jake McEnearney, Aiden Livingston, and more. Tight running packs are what Coach Paul Vandersteen's teams thrive on. But don't count out the Red Devils, they know how to run well when it counts. Look for leaders Blake Evertsen and Chris Brenk leading the charge. They are definite low scorers for their team and the back of the scoring pack should be interesting to watch. Perhaps someone like Ethan Planson and Nathan Hill can come up big. Although the boys field is not as deep as the girls there is some depth with New Trier, Naperville Central, and Hinsdale South. Ted Oh, Jack Litowitz, and Warren Blood will lead the Trevians into battle. It's hard to believe that Hinsdale South finished 11th last year with their top runner placing only 30th. Things should be incredibly different for the coach Jim Dickerson led Hornets. In a very short time, he has turned a fledging program into a bonafide contender to win a state trophy in 2A. The Hornets will counter with the emergence of seniors Roman Drabchuk and Charlie Nodus- both runners are individual title hopefuls as well. Perennial powers Palatine and Naperville North be in emerging status at the moment, but please don't take them lightly. They are going to make it a battle for the contenders. 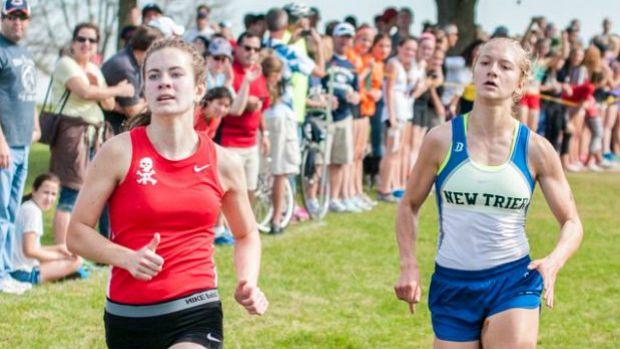 It very well could come down to Palatine vs. New Trier for the Hinsdale Invite team title

It is very hard to conceive there being another meet in the entire state that is deeper than this girls affair. Seven of the top eight ranked 3A teams will be lined up on the beloved KLM course when 9:30 am reaches its destination. Of those top seven squads in the state only top ranked Naperville North is omitted (they are in Iowa on their annual trek). Right away the fans will see who is overrated and underrated. Is Palatine as good as their pre-season ranking says they are? Is Glenbard West and Hinsdale Central in the right position? How about New Trier? The Lady Trevians always seem to surprise those who doubt them.

For starters, Palatine Coach Joe Parks stated: "After last year's exciting post season run (MSL, regional, sectional champions, State runner-up, NXN qualifier) there is a lot of optimism with a number of solid returnee's." This statement makes for must see cross country. The Lady Pirates will be led by senior Kelly O'Brien, one of the state's very best runners. O'Brien will need her mates to work behind her and Sam Lechowicz could be the one to lead the pack charge.

In no way will this blood bath be a two team affair. Glenbard West was an easy winner last year with 36 points, but times seemed to have changed with a bevy of graduation mixed in with some injuries and switch up of personnel. #1 runner and defending state champion senior Lindsay Graham is out. She is still not ready to compete at the optimal level that gives her the upper hand on opponents. Soccer standout sophomore Lindsey Payne is back and could be the team's top runner. New Trier only graduated the standout Mimi Smith- so the Trevians six state starters are expected to run well. Minooka placed fourth a year ago and could finish in the same spot if they can't get the fourth and fifth runners to narrow the gap. The Indians easily won the Normal West Invite last weekend in their season debut. Hinsdale is much deeper though, so finishing in the top 10 would be a great feat for most of the entrants.

Individually, there is going to be a new champion because Alexa Haff (Jr., Glenbard West) and Graham are out. But it appears on paper like another good one with perhaps Kelly O'Brien leading the way. It won't be easy though. Payne may be in the running along with the Minooka trio of Ashley Tutt, Mackenzie Callahan, and Emily Shelton. All three of them could be in the top five finishers. And then there is Anne Zaher of Hinsdale Central. The senior mile state champion of two track season ago is back in cross country form. She is back and healthy after running 17:35 at the Detweiller at Dark meet in July. 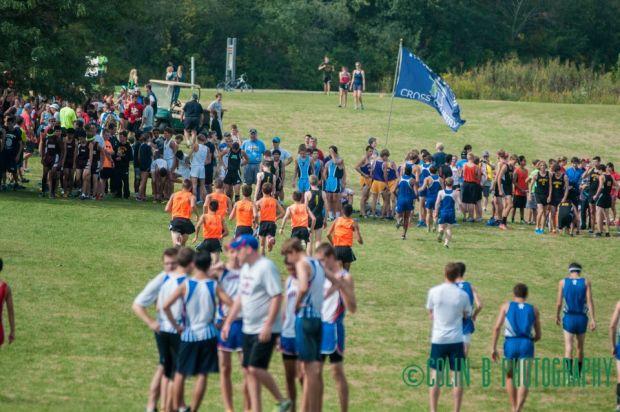 The 35th Annual Invitational will take place on the grounds of Fenton High School in Bensonville. This unique setting invite literally has all the bells and whistles naturally built in. To the north of the course are railroad tracks where freight trains could come at any minute. Up above you can expect to see and hear airplanes either taking off or leaving nearby O'Hare International Airport. It is quite the spectacle that is unusual for a cross country meet. And finally don't be shocked to see a wooded area in the midst of a cross country course. No we are not talking about a forest preserve. Woods! The first race starts at 9am so don't be late!

Glenbard West was an easy winner last year tallying 48 points. There is no real favorite here now that Buffalo Grove senior Kevin Salvano is out on a college visit. His trusty teammate senior Tom Cleary is ready to standout and keep the Bisons in the title chase. Oak Park may have different plans though. Junior Irvin Loud is the foot on the gas front runner that the Huskies will be looking to. Loud has matured into one of the best runners in all of Illinois. He will drag out the race pace from the gun and that may alter others plans. But a smart team like OPRF will hold back their pack and run together and emerge over the final mile. Vernon Hills will get their opportunity in this 3A heavy field to show what they are made of. Junior Shane Williamson is the man to watch for the Vernon Hills. Wheaton Academy, another 2A school, will be in the sauce for team title considerations.

The girls field is similar to the boys in that there is not a clear favorite. The winner could come down to a few teams if their plans execute well. DGN appears to have the slight talent advantage with junior Emma Moravec leading the way. Although she isn't as flashy in cross country as she is on the track, she is still good. This may be the season that she emerges into a force to be reckoned with. The Trojans would certainly have the upper hand with a few low scorers. DGS on the other hand was beaten handily in their first outing at Yorkville. Coach Doug Plunkett did not have a key runner Michaela Hackbarth in the line up. Hackbarth was the 3A 800m state champion. She hasn't really committed to cross country full time in the past so this could be an interesting experiment. Talent wise she is as good as anyone in the field. Glenbard East is the "X" factor here. The Rams come as a team ready to show what they are made of. This is the same for Prospect. It has been several seasons since the Knights have been a real factor in cross country. Junior Brooke Wilson finished second last year ahead of Moravec. She will be ready for the title along with Vernon Hill senior Vivian Overbeck. The Early Bird should be a good meet to watch for everyone who attends.

Outside of anything going down on the Missouri side of the Mississippi River, it would be hard to find out what meet is better in the St. Louis metro area.

O'Fallon and Edwardsville finished 1-2 here with Springfield taking a distant third. The cards may be switched up this time as the state ranked Senators are loaded. They should be the favorite and with something to prove against their big school cousins. It will start with senior Heath Warren who had a monster 2015 track season. Warren is clearly one of the best runners in all of Illinois on any given day. Dorrian Gordon or anyone from O'Fallon is no longer around to stop him from obtaining the gold medal. Chatham-Glenwood is another good team that should not be taken lightly. Junior Landon Skelton is the #1 runner and a favorite for top honors. His teammates are a bunch pack runners who will stick together throughout the entire race and keep the scoring split honest.

No ranked teams here like in the past with the bigger 3A schools with O'Fallon and Edwardsville. They are both reloading on the larger state picture. This will give Sacred Heart Griffin and Chatham-Glenwood an opportunity to make some noise.

THE REST OF THE STATE MEET ACTION