Cross Country is a beautiful because it encompasses all of Mother Nature’s elements during the fall campaign. Many times races will feature sun, wind, rain, snow, and even mud on any given day. Saturday morning at Washington Park on the campus of The University of Chicago, the elements of wind, rain, and mud was fully illustrated.
#19 Chicago Jones College Prep, a once dormant boy’s program was brought to life by head coach Andrew Adelmann over five seasons ago.  In that time span Adelmann and his coaching staff have won one city title and one state championship. Now add a second Chicago Public League plaque to the Eagles trophy case. Jones went out in a solidarity force from the gun that produced all five scorers among the top 10 to easily defeat Lane Tech 35-67. Whitney Young, a program featuring some of the finest young talent in the state, finished third with 68 points. Northside College Prep tallied 109 points to stay in front of Payton’s 188 points to close out the top five positions.
The Whitney Young girls on the other hand came into the championship battered and bruised from a tough schedule that at times was unpleasing for head coach Bob Geiger. However, the Dolphins were able to steer their ship in the right direction at the right time and claim another crown on a higher sixth place runner finish over Northside College Prep. Both schools were deadlocked 61-61. Pre-race favorite Lane Tech finished three points back with 64 points.
Girls’ race sequence- 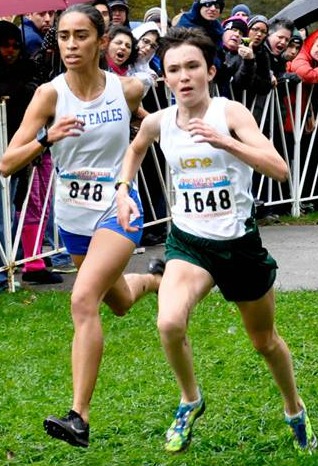 The Washington Park three-mile course was already eschewed by the time the girls took their turn. The splash of rain would also add to the excitement and treachery that makes cross country a fun sport.
Lane Tech sophomore Maggie Scholle had plans on getting out fast and she did. A fellow sophomore named Yarely Robledo of Mather joined her in the first 100 meters.  But she soon fell back and Scholle was off on the journey by herself.
The first mile was negotiated in 5:51 by Scholle followed by Madison Weatherly (Sr., Northside Prep), Jada Palmer (Sr., Whitney Young), Robledo, and Jocelyne Mendoza (Sr., Taft) who were seven seconds back. Lane, Whitney Young, and Northside Prep were locked in a tight battle after the first mile.
Scholle rolled into the second mile unscratched and opened up a bigger lead on the field. It appeared as though the race would be out of hand for the chasers. Mendoza moved into second place at the halfway point. Whitney Young started to assert themselves as a team with five girls in the top 15. Northside Prep was there as well. However, Lane was spread out among its scorers and in big danger of not defending their championship.
Scholle hit the mark in 11:58- 10 seconds ahead of a surging Mendoza. Everyone else in the key positions was fighting for vital team points. Various coaches were barking instructions for their runners to get it going.
The final half-mile came down to who wanted it more. Scholle’s big lead was evaporated and reduced to less than five seconds with 200m to go. With less than 100m remaining, it was just a second. Mendoza is a tremendous middle-distance runner with personal bests of 5:22 and 2:18 on the track. It was clear that she had the momentum on her side.
It was dead even with less than 20m to go. But the determination and grit of the diminutive Scholle would not be denied. She found an unhidden fifth gear and edged Mendoza just before the finish line to win the closest race in CPS girls’ history 18:00.86-18:01.32. “I was talking [with my teammates] before the race really got me mentally prepared for this race,” said Scholle of her first major title. Palmer took third ahead of Weatherly 18:40.42-18:40.51. Daisy Mora (Sr., Jones Prep) closed out the top five in 19:04.
Boys’ race sequence-
Jones Prep has been one of the best teams in the CPS in recent years and with a flourishing minor league system that continues to supply talented stock to the varsity (the Eagles won both underclassmen and open races) the gravy train will continue to flow for Coach Adelmann and company.
Unlike in past years when Jones would come in the championship with a Pitbull approach after the first mile, this Eagles team has used a team pack approach to get the job done all season. The opening and early moments of the race went out very conservative and played into the favorites hands.
Among the herd of runners who passed through the first mile in 5:05-06 were Pavlo Hutsalyuk (Sr., Lane Tech), Clayton Mendez (Fr., Whitney Young), Kyle Maloney (Sr., Jones Prep), Mark Protsiv (Sr., Jones Prep), Walmer Saavedra (Jr., Lindblom), and Christian Badillo (Sr., Lane Tech). These runners along with another half dozen quality harriers stuck together like glue over the next ¼ mile.
It was back on the other side of the course around the 1.75 mile mark where Hutsalyuk and Saavedra began to challenge themselves and open up a slight gap on the field. They hit the two-mile mark in 10:15- two seconds ahead of the lead strung out runners. It was Mendez followed by four Eagles striding together. At this point the team race seemed to be well in hand for Jones.  Whitney Young looked sharp in their own respect with five scorers in the top 15. 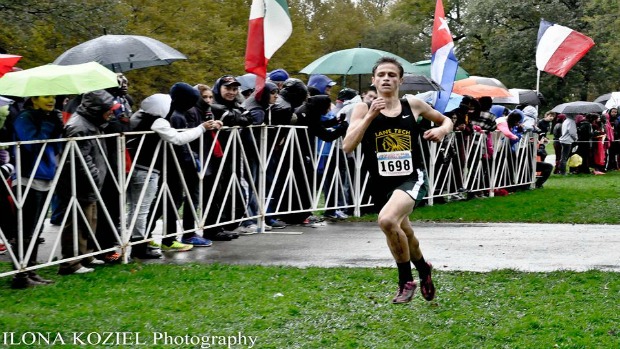 Pavlo Hutsalyuk became Lane's third CPL individual champion over the past 20 years
Saavedra ran like a confident emerging runner is supposed to when going up against veteran runners. “I wanted to be in the lead [and] set the pace… I tried to stay in the lead because [Pavlo] had 1:49 800m speed,” said Saavedra of his front running tactics.  Saavedra used his last bullet with 600m to go when he surged against Hutsalyuk. However, Hutsalyuk thought about all the hard work that he put in and it being his senior year. He was not going to let the junior emerging elite Saavedra steal his race. Hutsalyuk put his trademark closing leg speed to use and pulled away for the win in a personal best15:03. Saavedra also produced a lifetime best effort of 15:09. The final tally does not indicate how close things were among the city’s top runners. Mendez took a distant third but still ran a fine time of 15:19. Abraham Tobias (Sr., Taft) used some leg speed of his own to hold off Badillo for fourth 15:20-15:23.
As for the team title, Jones was content in conceding the individual glory by taking places 6-10 and sewed up the victory quickly and decisively as 35 points indicate. “The goal was to run a strong pack race and put pressure [on the competition],” Adelmann said his team’s great performance.
Tweets by MilesplitIL