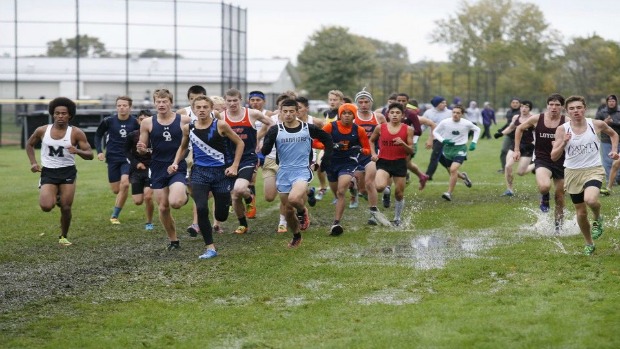 It was a splash affair at Niles West Pat Savage Invite (Steven Bulgarin images)
Who really knew that just a week ago when it was 80 degrees in most parts of the Chicago land area, that it would be the last time that summer touched us? When the parades of school buses filled with school kids touched down at Niles West High School in Skokie on Saturday morning they received a rude awakening.  The Mercury on most smart phones read 39 degrees. It was clear sign that said “welcome to fall, winter is around the corner!” The harsh conditions did not deter the heart and effort displayed by the hundreds of young men and women competing in the 44th Annual Pat Savage Niles West Invitational. It was still 39F when the first race commenced at 9am.  It perhaps picked up a degree or two but it was still COLD!
Boys-
Unlike some invitationals and some teams, St. Ignatius coach Ed Ernst saw a purpose for his team to compete hard and at full strength prior to the conference championship weekend that is two weeks away. “Competing here gives us a chance to run on the sectional course, and we also like alternating between highly competitive meets where we are the chasers and meets where it is a little bit less competitive,” said Ernst of his reasoning of his team racing. He added: “and we want to beat Loyola.”
Loyola Academy and St. Ignatius are fierce competitors when it comes to cross country. They always have been if you check the historical logs. Loyola won by a point in the overall team standings last year. They met last weekend at the Palatine Invitational and they will meet again in two weeks for Chicago Catholic League Championship.  So it is fitting for the two powerhouse programs ranked #5 and #8 in the latest MileSplit Illinois Power Rankings to duel each other once more on a neutral stage.
The race itself got out underway very calm and it took quite a while to sort out. The Niles West course has a flat layout featuring up to 45 turns during the snake like Odyssey. It is also in the middle of the school’s sports complex shy of wind cover. So it shouldn’t have been a surprise to many fans to see such a big cluster of runners nestled together through the first mile. The lead pack contained runners from  passed the clock in 5:10- certainly not as fast as some athletes wanted but at the same time no one wanted to be a front runner. The usual fast starter Oak Park-River Forest sophomore Irvin Loud sat in the middle of the front pack. Junior Dan Santino of St. Ignatius did not bolt out as predicted. He sat with several of his teammates. It was just a big cluster.
Things finally got moving in the second half of the second mile.  Loyola senior Jack Carroll and Hinsdale South junior Charlie Nodus seized the lead and ran step for step through the second mile in approximately 10:25. Kallin Khan (Sr., St. Ignatius) and Santino tried to gang up on Carroll and bolt away with about 1k to go, but the attempt failed. Carroll was able to regroup and use his good closing speed for the decisive win in 15:14. Khan held on for second in 15:19. His teammates Santino and senior Andrew Weber followed close behind in 3rd (15:23) and 4th (15:26). Although the Wolfpack had to wait for their 5th runner junior Vince Lewis to check out the scoring nearly 45 seconds later, they got the win 43-53 over Loyola.  The Pat Savage Invite used to split up finishers into different chutes and call the teams red and white.  Meet officials no longer use two chutes but they still designate red and white teams for awards purposes. 2A #18 Hinsdale South continue their climb back in the cross country limelight is awarded the winner of the red division.  St. Ignatius takes the white division crown. 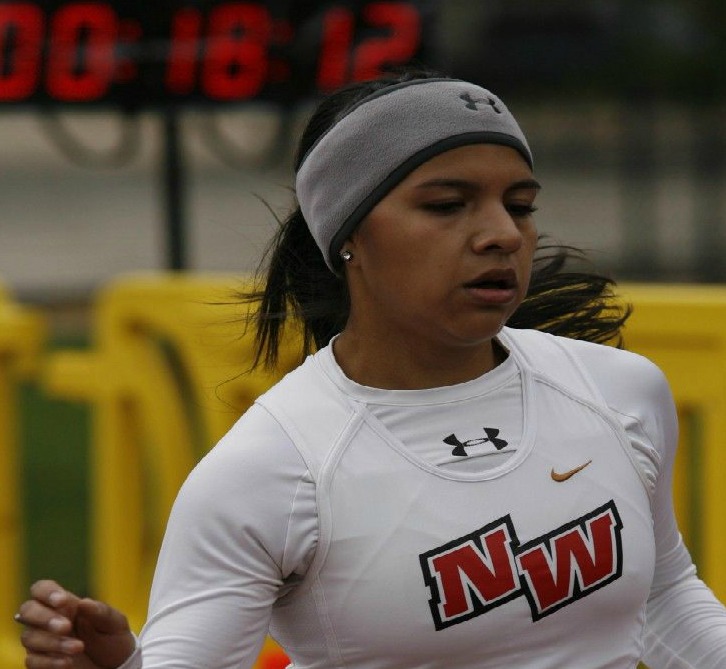 Niles West Senior Christine Mujica was larger than life for her fans in winning the Pat Savage Invitational (Steven Bulgarin image)
Girls-
The girl’s race didn’t have the fanfare of their boys counterpart but it was just as fun to observe.  The opening herd got out faster than the boys in terms of effort, and the pace continued to flow with Niles West senior Christina Mujica and Woodstock sophomore Kate Jacobs leading at the first mile. After them it was basically a stream of runners coming through one after the other.
Mujica began to pull away from Jacobs midway through the second mile and continue to surge back around the 2m in 12:15. Jacobs and her teammates were in a dogfight for a title. It would be Abby Cain (Jr.) and Alexa Henz (So.) of Oswego East chasing after Jacobs.
The finish was academic for Mujica who won her first invitational in 18:11. “The first mile was very fast,” said Mujica said of establishing a presence right from the beginning. This win certainly will put her name in the hat as one of the key runners for the Niles West Sectional watch list. Mujica who visited University of Illinois-Chicago recently on a college visit will certainly get some more offers as time goes on.
Jacobs placed 2nd in 18:27; Emma Dzwierzynski (So., Evanston) was 3rd (18:39) ahead of Jocelyne Mendoza (Sr., Chicago Taft) who logged 18:43; Emma Makowski (Sr., Montini) rounded out the top 5 clocking 18:53.
Oswego East came back to clip Woodstock 88-92 for the overall team title. The key of course for the unheralded Wolves is that they ran a smart race down the stretch in defeating a good Bluestreaks team that is ranked #15 in Class 2A was the almighty 5th runner.  The Wolves prevailed in that category 35th to 38th.  Evanston put their name in the top running of the Niles West Sectional with a solid 3rd place finish scoring 121 points.
Tweets by MilesplitIL