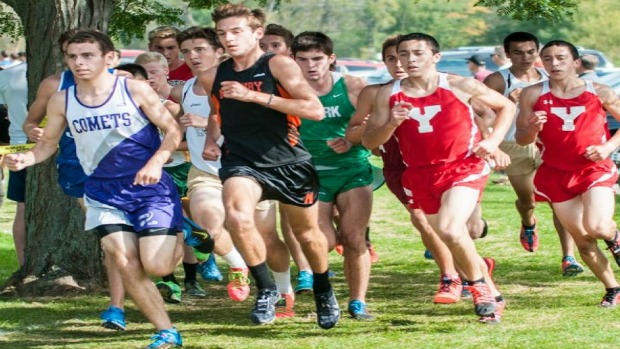 On a perfect day for high school cross country, Deer Grove East Forest Preserve was the backdrop for the 31st Annual Palatine Meet of Champions. The climes reached past 70 degrees and partly sunny by the time the boys’ varsity race took flight at 10:50am.
However, it was the girls who kick started the main event festivities. The host Palatine Lady Pirates righteously defended their title with a convincing win over 2A #1 Yorkville 70-91. 3A #5 Winnetka New Trier held their own in taking third with 101 points. Out of state power Centerville, Ohio, the #1 team in Buckeye land, copped the fourth place trophy tallying 120 pts. Kentucky power Louisville Assumption grabbed the final trophy before heading home with 142 points.
The boys story was a little more complicated than the girls as 20 points separated the first six teams. St. Louis University High School came up with victorious over Wilmette Loyola Academy 172-177. Sounds like a high school golf team composite score doesn’t it? New Trier squeezed past Yorkville and Louisville St. Xavier by six points totaling 182 points to earn the third position. Yorkville won the sixth man tiebreaker against St. X- both teams scored 188 points respectively.
The Girls Storyline-
Cross Country is a sport that heavily depends on a total team effort. The #5 runner is just as important as the #1 runner (if not more important). Coming into the meet Palatine had been running well and their #1 and #5 runners were as potent as any team in the field. That assertion would be put on display right from the gun.
The pre-meet favorite athletes and teams got out well but it took about a mile into the race to really see what was happening. Kelly O’Brien (Jr., Palatine), Skyler Bollinger (Jr., Yorkville), Daly Galloway (So., Gardner South Wilmington), Kelli Walsh (Fr., Centerville), and about seven others hit the opening mile in 5:40. New Trier’s Mimi Smith (Sr.) would trail just off the pack.  Palatine had their top five runners under 6:00 and looking sharp.  Yorkville had good numbers in top 25- three Lady Foxes were stalking the prey. Loyola Academy and Assumption also looked strong.
Positioning only changed slightly in the next quarter-mile when Smith joined the front pack with O’Brien, Bollinger, Walsh, and Lainey Studebaker (Jr., Centerville). The race would switch tracks at 1.5 miles and spread things out. Several coaches began to urge their runners to get it going from the sidelines. Smith was starting to jell at this point alongside O’Brien. Bollinger was there too although her facial expression told a different tale. Galloway hung tough just off the pace; she was working hard to avoid being on an island. At the second mile, the pace had slowed down to a pedestrian 11:41. This probably didn’t bother Smith who is really a miler, and with just a mile to go it became a perfect set up for her. But O’Brien stayed glued to her with ever growing confidence. Meanwhile, Bollinger, Walsh, and Galloway were just trying to hold on. Brooke Wilson (So., Prospect) had moved up into the top 10 to add some suspence.  Assumption appeared to close the team score gap down as several of their sideline teammates began cheering loudly. Palatine coach Joe Parks was just there in a nick of time; he crouched down low near the clock and started barking at his girls to MOVE! And move they did. Junior Megan Beach and senior Amy Kieliszewski surged past a few tiring girls.
Palatine was winning this race according to the naked eye test and the only way they could now lose is if a complete breakdown occurred. It didn’t happen. O’Brien would turn a kicker’s race down the final 200m slope into her advantage in holding off Smith for the win in 17:22.3. Smith had run solid but had to settle for second in 17:22.6. The next four places didn’t change much expect for Abbie Wright (Sr., Assumption) sneaking in for 6th place.  Galloway, Bollinger, and Walsh were the only girls ahead of her in the chute.
The final verdict was in and Palatine had won for a second year in a row, but this time there would be no alibis like a year ago when naysayers said they were only victorious against a short-handed Assumption team. The Rockets were a distant fifth and runner-up Yorkville could not match the Lady Pirates ferocious depth coupled by a stream of deadly finishing kicks.  The prognosticators were sure to notice this time around.
The Boys Storyline-
Coming into the championship St. Louis University was tabbed as a team to watch, but not many people outside of the Junior Bilikens camp really thought they could challenge the key Illinois teams for the title.
The Yorkville twin killing senior duo Jake and Luke Hoffert quickly moved to the front of the thundering herd of runners and established the pole position. McHenry senior Jesse Reiser joined the fray to lead the first kilometer. Junior Jon Davis of Oakwood was entered as an individual and copped a spot next to the aforementioned. Stevenson senior Sam Oh, sophomore Matt Pereira of Lake Zurich, St. Ignatius junior Dan Santino, and senior Bryce Richards of Mundelein (who ended up 157th) were some of the notables up front.
The first mile was a cluster with Davis, Reiser, Hoffert twins, Oh, Filip Pajak (So., Crystal Lake Prairie Ridge), and about 15-20 guys coming through in 4:51. The pace was some comfortable there must have been at least 50-60 guys under 5:00.
The pace would thin out slightly over the next half-mile with Matt Plowman (Sr., York), Graham Brown (Sr., Palatine), and David Rodriguez (Sr., Hersey) joining the lead group. The team picture was unclear as not more than two representatives comprised any school in the top 40 or so.
Just like the girls race at 2m, the pace had stalled. Reiser had less than an arms-length lead over the Hoffert twins in 9:55. Rodriguez, Plowman, Oh, Brown, and a lagging Davis comprised the top eight. The second pack contained Santino, Pereira, and Matthew Hennessey (Sr., St. Louis U High).  The weather conditions were beginning to take a toll on the field and as the Hoffert twins would later say “we know what the unwritten rules are in the last mile… every man for himself.”
St. Louis U High in white tops was being to assert themselves gradually with two scorers a short distance behind Hennessey. New Trier had four runners spread out evenly but not up top with Hennessey and his Billiken mates.  St. Ignatius had three runners in the onslaught as did Hersey. It seemed as though the race was going to come down to the final 400m for a team and individual winner.
The final quarter-mile was indeed a slugfest. Reiser was able to hold off the Hoffert twins Jake and Luke to win in 14:38 to 14:40 and 14:43. “This was the toughest race of the year for me- not doubt,” said Reiser to a friend in earshot distance.  Indeed with dripping sweat from he and the other finishers such as Rodriguez- 4th, Brown-5th, Davis- 6th, Pereira- 7th, John Carroll (Sr., Loyola)- 8th, Spencer Hayden (Jr., St. Xavier)- 9th, and Hennessey- 10th validated that point.
Tweets by MilesplitIL