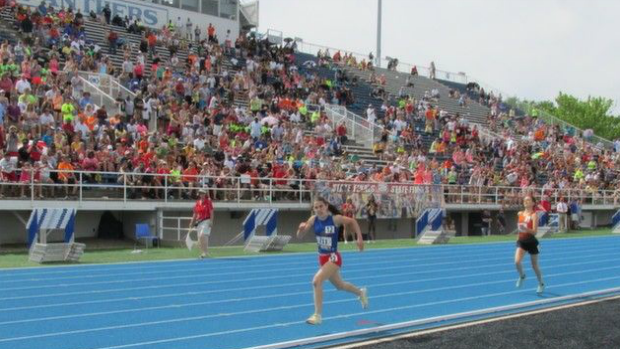 A new era of Class A track and field was ushered in two respects. The first respect was Effingham (St. Anthony) freshman Anna Sophia Keller winning her track title in the 1600m. She may go down as the best to do it. Only time will tell though. The second respect is Aurora Christian getting into the team win column after Moweaqua (Central A & M) winning the last two titles.

Aurora Christian won their first title beating a Tremont team that was considered a favorite my many observers 49-45. Sullivan got the third place trophy scoring 44 points. Carthage (Illini West) placed fourth with 34 points and Carterville rounded out the top five tallying 31 points. 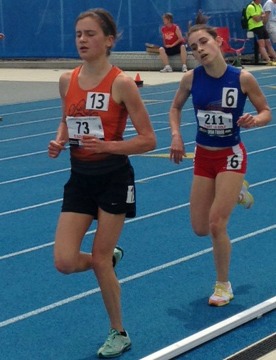 One of the major highlights of the entire IHSA State Championships inside Eastern Illinois University’s O’Brien Stadium was the battle between Anna Sophia Keller and senior Kelsey Hildreth of Byron. The two lady titans would face off three times over the course of three days.

Keller got the best of Hildreth during the cross country season when she won the 1A harrier title. Hildreth won the Illinois Top Times 3200m but Keller was just returning from her swim season and opted to compete elsewhere. Although preliminary races don’t officially count toward wins and losses but a moral victory would have been nice. Keller made sure Hildreth knew she was for real with an unnecessary but decisive 4:54.93 prelim win. Hildreth was content with her 5:02.21 qualifying run that took place on Thursday.

The first official meeting would be on Saturday in the 3200m. The friendly pair did not waste a moment as they went out extremely fast- fast enough for the casual observer to think that they were watching the mile instead of the two-mile. Keller and Hildreth were locked together through the first 800 in a sizzling 2:28. They would continue the hot pace at the halfway point in 5:04.

Hildreth led the next two circuits with Keller right there glued to her hip. On the gun lap, Keller took off in what appeared to be a dead sprint with unorthodox form and head swinging all over the place. Hildreth was running hard but could not close the gap. As the race entered the final 100 it was still Keller leading by a few seconds but she was in big trouble. She started to stumble and fell to the track a few meters from the finish line. Hildreth kept her momentum and side stepped a lapped runner and Keller who was trying to regain her composure. Hildreth crossed the finish line in disbelief that she won. She immediately threw her hands up to her face with elation and tears of joy with a winning effort 10:19.61- US#19 and IL#1. Keller was able to recover and place second in 10:22.16. The small class girls owned the first and second fastest times in the state by a wide margin.

Several hours in the 1600, it was more of the same in terms of a separation from the rest of the pack. Hildreth took over the chores of leading with 73.8 and 2:33.0 for the first two circuits. It was the same at the bell in 3:50.6. Keller once again took off on the backstretch, but this time she did not falter in the waning moments and won in 5:01.02. Hildreth took second with a time of 5:01.68. The pair shared pleasant exchanges near the athlete’s tent prior to the awards ceremony. Talent respects talent. Too bad Hildreth is a graduating senior on her way to Northern Illinois University because this could have been a great rivalry. Keller will just have to find someone else to challenge her next year. 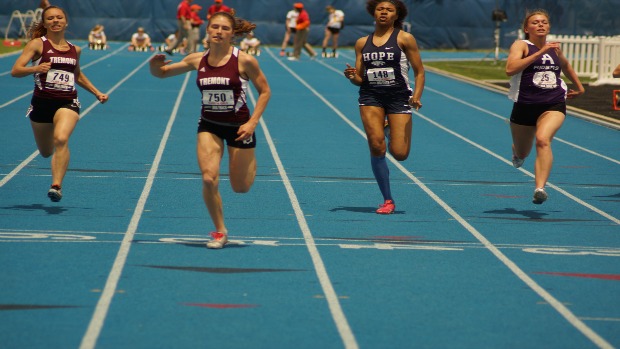 Tremont senior Amelia Glueck completed her stellar career as one of the best to ever do it on a classification level. The Illinois Wesleyan University bound Glueck got her three-peat in the long jump with a big 18’7” winner that was nearly five inches better than last year’s darling Peyton Wade (Sr., Aurora Christian).

Glueck moved over to the track and won her second consecutive 100 title in 12.29. The gravy train did not stop there as she anchored her team in the 4x100 relay to a third place effort in 49.74. Finally, she was able to complete a long and fruitful day by placing fourth in the 200 running 25.65 just short of the winner Natasha Brown's (Jr., Aurora Christian) 25.37. 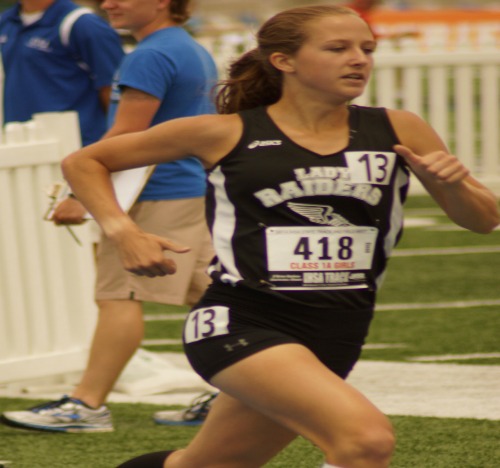 Morgan Zacharias (Jr., Reed-Custer) is one of the state’s most consistent pole vaulters. She was competing and setting a classification record at the exact same time Lindsey Murray (Sr., Harrisburg) was. Zacharias did not let the loud excitement of Murray stealing the headlines with her IHSA record. She did a marvelous job of clearing 12’10”.

Karissa Roman (Jr., Kewanee-Weathersfield) won the high jump and solidified herself as the state’s best jumper with a 5’8” effort.

Nichyria Byrd (Jr., Chicago Ogden Charter) was a big unknown coming into the state meet. She placed second in the Chicago Public Championships with a 35’4.25” and then moved up to sectionals and hit on 36’4.25”. Byrd picked the right time to perform at her best with a 38’3.50” banger in Thursday’s prelim. The mark stood up and became the IL#1 mark in terms of legality.

The Illini West 4x1 relay squad produced the only sub-49.00 time with a 48.99 winning effort. The quartet from Carthage had been the top team all season.

Sullivan beat a good Aurora (Christian) team that could have flipped the script in 1:43.17. Aurora Christian’s Natasha Brown almost pulled her team to victory on anchor but settled for the silver in 1:43.29.

The softball playing Amanda McClain (Jr., Sullivan) won the 400 in a speedy 56.19. One of the pre-meet favorites, Rachel Rhodes (Sr., Williamsville) was disqualified.

Williamsville and Rachel Rhodes got sweet redemption by winning the 4x4 and becoming the first team in the classification to dip under 4:00 at 3:59.47. Illini West was close in second at 3:59.54.