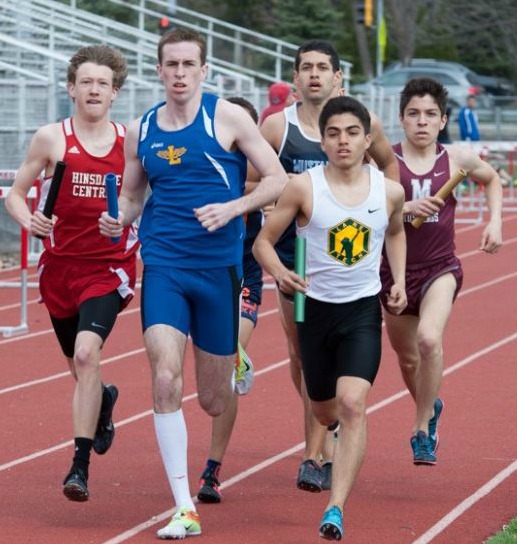 The marathon of all relay races, the 4x1600m featured some of the state's best  long distance squads (Colin Boyle photo)

After a brief meeting of the coaching think tank that featured Subway sandwiches, chips, and a drink, it was time to start the 16th Annual Hinsdale Relays at 11am. The late start was due to an area wide ACT exam. The featured teams consisted of Hinsdale Central, Lyons Township, Chicago Lane Tech, and Downers Grove South.  Hinsdale Central senior Billy Magnesen was the first to pull into the lead halfway through the lead off spot in 2:12. Lyons Twp. senior Ed McCarter, Downers Grove South senior Jacob Amiri, and Lane Tech senior Jon Vara tugged along.

McCarter and Vara moved to the front on the penultimate lap and began to pick up the pace. But with 300m to go McCarter dropped Vara and Magnesen and went with Amiri. Lyons and Downers Grove South were virtually even with 4:25 opening legs. Lane Tech sat in fourth place over four seconds off the pace.

Lyons, Downers South, and Hinsdale Central linked back up together for the next 600m until Lane's Pavlo Hutsalyuk caught up and joined the party. Hutsalyuk seemed to gather himself for the next 200m before using the momentum and moved into the lead.  Hutsalyuk put in a surge and opened up a gap on the trio.  Hutsalyuk closed out his leg in 4:21.5.  Lane Tech would not trail again as third and fourth legs Christian Badillo (Jr.) and Oswaldo Lorenzana (Sr.) held serve to win in 18:02.4.  Lyons finished second in 18:12.8 and Hinsdale Central capped third with a time of 18:17.5. 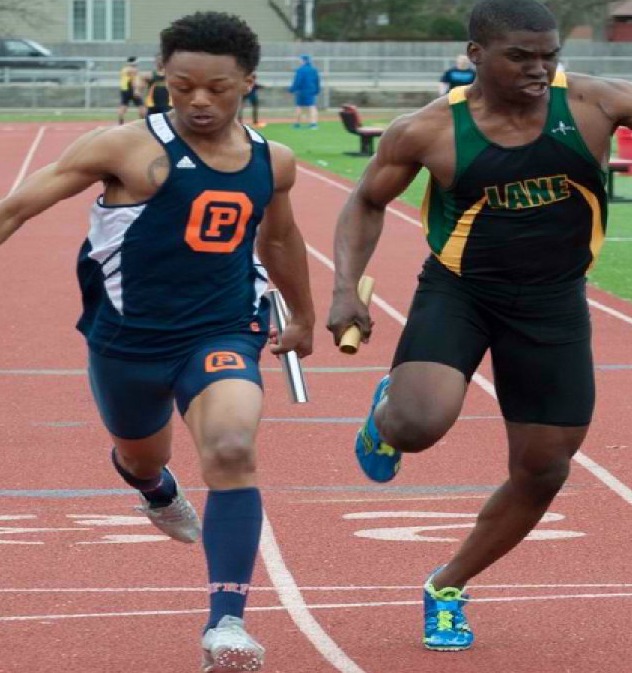 Sprint relays hit the track for some competitive times-

There was no doubt the weather held up some really fast times if you consider a stiff 20+ mph south winds troublesome. The speedsters didn't seem to mind the conditions because it the temperature was in the lower 70s at game time.

Oak Park-River Forest in their first true outdoor meet of the season was happy to get their quartets some action. Coach Tim Hasso remarked that his guys were progressing well, but they "are a work in progress" as he put it. His 4x1 squad looked fine through three legs as they had a comfortable lead.  However, it was quickly shrunked up by Lane Tech anchor  Eric McMiller (Sr.).  He and fellow Huskie anchor waged a duel to the finish line. Oak Park prevailed 43.1-43.2 over Lane. Hinsdale South was third in 43.9.

The 4x2 relay was just as thrilling to watch for the fans as three schools broke 1:31. Lane, Lyons, and Hinsdale Central each had an opportunity to lead in this one. Hinsdale Central appeared to have the early lead until Lyons grabbed control around the third leg. Lane rushed hard on the anchor leg and this time the Indians won in a season best 1:30.2. Lyons was second in 1:30.3 and Hinsdale Central copped third with a time of 1:30.8.