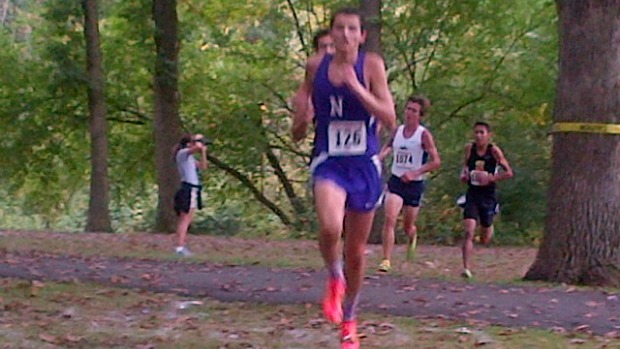 It shall be a new meet to cover in the month long lull period for yours truly. The Locktoberfest as it officially called will be an interesting choice in the southwest Chicago suburb of Lockport.  If the thunderstorms can stay way and the Mercury does not reach the predicted 81F by game time, then those in attendance at Dellwood Park may be witnessing one of the best meets of the season- and certainly the premier all-boys invitational of the season.

Meet outlook: Something has to give and this meet is going to be a rankings shaker for sure. The deep fields should produce some amazing performances. But it should be noted that times may be somewhat slower per mile average due to Dellwood’s tough terrain and the course length is 5000m.

Hinsdale Central should be the favorite despite the absence of top runner Billy Magnesen (Sr.) who will be sitting out due to an injury. However, the task will not be a piece of cake when you consider they competed against #1 York on Thursday.  The young men’s legs will be a little weary after running hard.  In addition, the Red Devils haven’t competed in an invitational since the First To The Finish Invite on September 14.  The lack of competing against big fields could pose an issue. The field general duties will now fall on senior Kevin Huang’s shoulders.  Huang is the team’s normal second runner who must now step up in the top spot. The 2-5 split in that Peoria meet was 32-seconds and 34-seconds with sixth man Matt McBrien (Jr.) included.  This could mean very good news if the same follows on Saturday.  Freshman sensation Blake Evertsen has been a very pleasant surprise this season and should continue to show maturation.

Downers Grove North is the team to watch here.  The Trojans have been maintaining quality meet performances on the strength of front runners Zack Smith (Sr.) and Ryan Clevenger (Jr.) in which they can call upon to drop low points. Key runner Jared Spilkey (Sr.) provided some added support in the third slot this season before going down with an injury.  But if Downers North desire to finish among the elite teams they will need their fourth and fifth runners to step up.

Buffalo Grove has been one of the top teams in the state this season and they intend on staying there with brothers Steven (Sr.) and Kevin (So.) Salvano- leading the charge.  Steven won the Ron Gummerson Invite last weekend despite fighting an illness in recent weeks.  Hopefully, Tom Cleary (Jr.) can continue to pick up the slack after the Salvano’s as a solid third runner. The Bisons defeated Downers Grove North at FTTF.

Lincoln-Way Central will have another opportunity to improve against a few teams that they have lost to.  The Knights were defeated by Hinsdale Central, Buffalo Grove, and Downers North at FTTF.  The team scoring split in that affair was 40- seconds. That is a solid number that every coach desires but the Knights will need the 2-5 pack up closer to the aforementioned team’s scorers to have a chance of beating them.  Chris Kaminski (Sr.) is the squad’s ace and should be up front to provide a top 10 finish.

Neuqua Valley has been idle for several weeks but coach Paul Vandersteen’s crew will be itching to get back into action at a meet that they have always done well in. Senior Nick Bushelle is the Wildcat’s low point man who should be among the leaders.  This team is not a one-man gang though.  Neuqua Valley is a strong pack running team that normally drops low scoring splits.  That workmenship will need to root its head for the unit to have success.  Junior Daniel Weiss is the squad’s second best runner who ran well at FTTF; he has the capability of finishing as one of the key individuals.

There are several other good teams to keep an eye on.  Naperville North has big plans in November so this meet could be the Huskies coming out party.  They will need Kerry Gschwendtner (Sr.) to step up if he is in the line-up.  Gschwendtner did not compete in the team’s only big invite at FTTF… defending team champion Lyons Township may not be as deep or talented as last year but they are running their best cross country at the right time. The Lions could potentially place very high with the assistance of several different runners as a front man. Dan Lupano (Sr.), James Ryan (Sr.), and Henry Hostettler (Jr.) are running well now.

Former Neuqua Valley superstar and recent world championship track 10k finalist Chris Derrick holds the meet record (15:15.8-5k). That mark appears very safe but the individual race still should be a dandy.  Last year’s top three finishers return in Zach Smith (15:35-5k), Dan Lathrop (Sr., Plainfield South), and Steven Salvano.  Smith would appear to have the slight favorite with a vastly improved Lathrop close on his heels.  If Steven Salvano can’t boot up, watch for his younger brother Kevin to play cameo for him. Nick Bushelle is capable of an individual title if the opportunity presents itself.  Also, Joseph Suarez (Jr., Plainfield East) is a strong candidate for top honors.  Suarez has run 14:51 or better in three out of his four three-mile races. Another key individual to watch is Kevin Huang.  He has proven to be as nearly potent as his teammate Billy Magnesen this season.  Champaign (St. Thomas More) will deploy senior Nick Hess as a front running boss.  Hess is a Class A runner but has run with the best harriers in the state this season.  He recently placed eighth at the Peoria Richard Spring Invitational. Simon Thorpe (Sr., Dixon) will hold the 2A classification hopes in his legs.  Mr. Thorpe ran 14:56 at Richard Spring several weeks ago.