Although there were fewer teams this year for the annual St. Pat’s Invitational, the meet still served as the annual season opener for several notable Chicago Public Schools and Chicago area catholic schools.

The Lane Tech Boys were able to overcome warm climes that reached into the lower 80s and run away with the team title for the third straight year with 18 points.  The Indians used a tight-knit scoring pack of 10 seconds to cruise past Chicago Mather who scored 67 pts.  Chicago Northside Prep copped the third place team trophy with 76 pts.  Lane’s Jon Vara was victorious in 15:46 on the mostly flat three-mile Schiller Woods layout.

The girl’s race was just as decisive as Northside upended Lane Tech 40-63 on the strength of Madison Weatherly’s third place.  Three more Lady Mustangs would place in the top 11 and the all-important fifth runner Caroline Owens closed the door at 15th  place.  Lane’s Joanna Podosek won the race for the second straight year in 19:22. 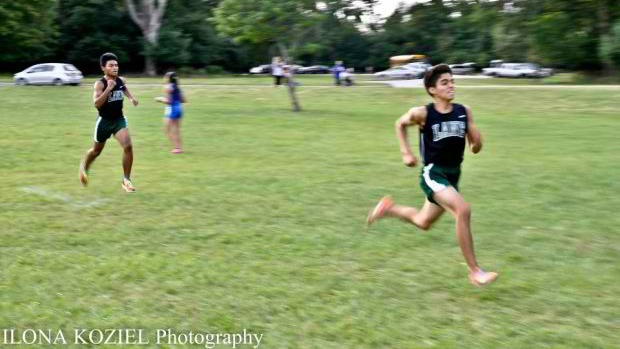 There was talk among friendly rivals Lane and Mather a few days prior to the meet that both parties wanted to tempo the first two miles and then take flight the final mile.  In essence this seemed like a perfect opportunity to get in a high powered workout in an actual race and not a controlled time trial.

The start of the race went out in an honest pace but nothing slickly fast.  There was a group of about 15-20 runners jumbled together at the first ½ mile and mile in 2:34 and 5:21.  The pace stalled to the amazement of none of the coaches who were screaming out their instructions.

Jacob Meyer of Chicago University High decided that he had enough of the pedestrian pace and took off- a jail break if you will.  Meyer opened up a five-meter gap and then stretched to over 20 meters at the halfway point.  The entire Lane Tech pack along with several runners from Mather, Fenton, and Northside Prep stood together.

Meyer still led at 2m (10:51) but the pack was beginning to move.  Finally, just before the giant hill located in Schiller Park, the pack led by Lane’s Oswaldo Lorenzana surged after Meyer.  Lorenzana caught a fading Meyer and put in his own surge that stretched the field out.  It was just 400m remaining that Lane had the top three runners moving to the finish line and five in the top six.

Vara hit the final 200m homestretch in full sprint mode and Lorenzana just a few meters in back.  Vara jubilantly hit the finish line for his first varsity win. Lorenzana was a tick behind in 15:47. Mather’s Deivi Tahiraji inched past Christian Badillo (Lane) take third in 15:52. Pavlo Hutsalyuk of Lane placed fifth ahead of teammate David Schmieg 15:54 to 15:56. 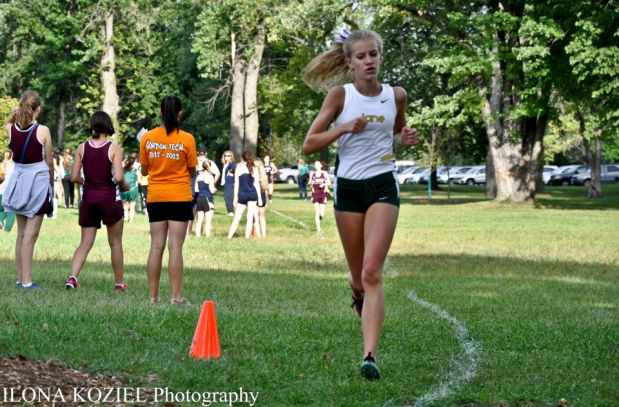 The individual race was less appealing as Podosek took charge right away and never looked back.  She hit the first and second mile in 6:24 and 12:56 for the easy victory.  Lucy Kenig-Ziesler of Chicago U-High placed second in 19:37.  Weatherly took third in 20:09 while Emily Doyle (Holy Trinity) and Hannah Witczak copped the fourth and fifth spots respectively in 20:16 and 20:18.

Some of the pre-meet hype was placed on Northside Prep and the tremendous summer training their runners had.  Coach Jon Gordon’s Mustangs recently held a two-mile time trial in which six of his charges broke 13:00.  That’s a pretty impressive feat for a team that some pundits consider an emerging force.

The Mustangs packed well up front with Lane Tech for the first mile before surging ahead with their 2-5 runners during the middle portion of the race to stretch out the Lady Indians bunch.   Weatherly is the team’s ace and was already upfront competing for a top three finish.  The end result was six Mustangs in the top 15 and six in front of the defending city champion’s fourth girl. Although Lane was a little decimated with a few key injuries, they will have their work cut out this season.  It appears as though there will be another team on the block fighting for the city championship.