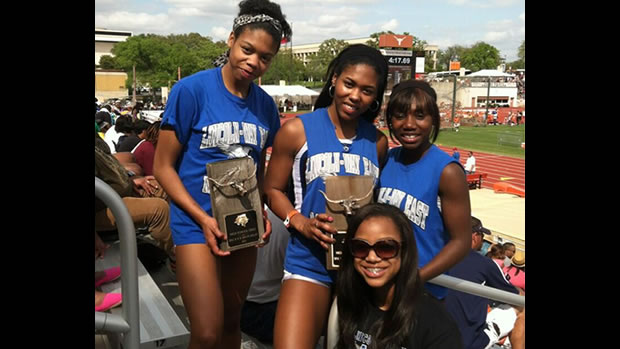 The week and weekend after the Top Times championship is usually designated for the transition of indoor to outdoor season.  It is a time for most teams to recover from a long winter of pounding the body, mind, and legs inside on tight indoor surfaces or rock hard school hallways.

The transition period is also a time for superstar teams like the Frankfort (Lincoln-Way East) girls team to continue to build themselves into a national power… and show the nation’s best that there are extremely girls outside of California, Texas, and Florida. 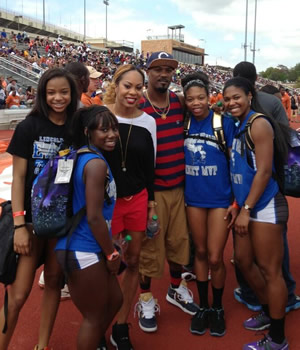 The 86th Clyde Little Texas Relays welcomed Lincoln-Way East and Danville to one of the nation’s most prestigious relays in the country.  Both schools entered in a variety events and came away with varying results.

The fireworks actually started in the athlete’s staging area called the “bullpen” when several Texas squads had a few choice words for the Griffins.  They actually thought they could intimidate “The Brown Franchise” and company.  No way and no how!

The 4x200r prelims would be the first event for Lincoln-Way East and they won easily over DeSoto 1:38.82-1:39.80.  Most people know that prelims don’t matter much- just run fast enough and get to the finals.  But in Lincoln-Way East’s case, it is a big deal.  They needed to prove themselves on the national stage out of the gate.  It is as simple as that.  And they did.

The Illinois crew went into Saturday’s final with a ton of confidence along with a choice lane where they would see all the key teams.  It was a close affair but for three legs but Brown was given the lead on her leg.  It was pretty much Brown keeping a lead amongst a fleet of mustangs chasing after her.  The final time margin produced an all-time state best of 1:37.55.  Lancaster was smoking as well but could only manage to nab silver medals in 1:37.75.

Lincoln-Way East used the momentum of the 4x2r to run their favorite relay (4x100r). The Saturday morning prelim went well as the Griffins earn the top seed in 46.89.  The time was the fastest ever for an Illinois quartet before the state series.  The final was more of the same despite a slight mishap on leg #2 between Alexis Hyshaw (Jr.) and Asia Brown (Fr.).  Brown did not get her take off and Hyshaw ran up her back.  However, they both admirably recovered and moved on.

It is always a plus when a team is as fast as the Griffins… and with a lurking Aaliyah Brown waiting on anchor in her three-point stance.  The team’s third leg Alexis Pierre-Antoine pushed her motor past maximum effort; she ran the curve as well as anyone could without the lead.  Aaliyah took the stick in the unorthodox left hand and scorched the home straight in pursuit of the Cedar Hill anchor.  Aaliyah blitzed past freshman Danyel White (all freshman quartet by the way).  The end result was 46.59 for the Illinois crew.  It was also another all-time regular season best and school record.  More importantly, it was the sportsmanship that Lincoln-Way East displayed in each and every race.  That display of humility was noticed by the Texan faithful.

Aaliyah Brown would return later put a cherry on top of the icing for her team when she won the 100m in 11.63 (+1.5).  Brown previously ran 11.64 in her prelim.  She will no doubt be a force in this event in the post-season, but for now she is happy anchoring her team to relay victories.

Lincoln-Way East was not the only team from Illinois enjoying themselves in Austin TX.  Danville made the long trek from central Illinois and earned some very valuable meet experience for the future.  They competed in the 4x1 (49.54), 4x2 (1:44.72), and 4x4 (4:27.89).  Alexis Jimson-Miller (Sr.) earned a medal for her team with a 6th place effort in the 100H (14.26w).  She will be among the favorites in 3A when the state championship series rolls around in May.

There were a few meets of note around the state that garnered some attention.

At the Belleville West Lady Maroon Invite, Emmonnie Henderson (Sr., Edwardsville) continued her terror on the competition in the shot and now discus with 45-2/158-8 outputs.  The discus mark is the third best throw in Illinois history.  Ironically, it’s not even a school record.  Henderson threw 161-1 two years ago to win the state championship.  She will undoubtedly get back both marks by season’s end barring some unforeseen occurrence.