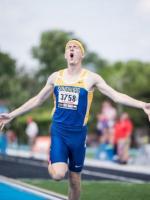 Play
Boys Mile - Jon Davis runs away with the victory

Miller and Ellis Rule Boys Meet Of Champions Day 1...
There would be no drama on the boys side of the action table as it was speed, power, and endurance that ruled the day...

Throwback Thursday: Nation's Fastest 800m, Drone Style...
Have you wondered what it looks like to have a bird's eye view of one of the nation's fastest 800m races in 2016?...

Throwback: Sean Torpy's Fastest High School Mile In 201...
Since 2015, the Magis Miles has offered a fast end-of-season mile featuring the best Illinois has to offer...

Penn Relays | Boys Fantasy DMR | Part 1...
Part 1 - Penn Relays would have been starting in a little over a week. But with Penn Relays being canceled this year, we decided to put together a boys Championship of America DMR to see how this woul...