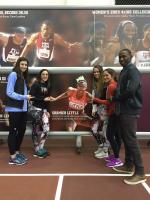 The B Side Blog: Record Assault Closes Indoor Season...
B Side breaks down the end of the indoor season...

Shamier Little Leads IL Alumni Report Charge: 1st May E...
Former Lindblom star is back at it in the 400H...

WATCH U.S. Junior Women's 4x400 win World Title in 3:30...
Watch the American team of Shamier Little, Olivia Baker, Shakima Wimbley, and Kendall Baisden take on the World&#39;s best and come through as the champions at meet end in the 4x400 meter relay finals...

WATCH Shamier Little roar to rest of the World with 400...
In the women&#39;s 400 meter hurdles finals at the 2014 IAAF World Junior Championships, the United States nearly had a 1-2 finish from Texas A&M&#39;s Shamier Little and Harvard University&#39;s Jade...

Texas Stars Shine on the International Stage...
Update on the Texas athletes at the World Junior Championships....

Shamier Little: The First Season Aftermath...
Ascending from the bottom of the scrap heap to the top of the mountain is usually a slow grind that most superstar athletes take.  Back in 2010 at the Midwest Prep Invite in Indianapolis, Evanston Hi...