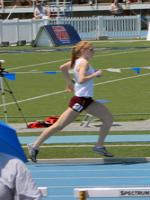 Marengo runner Adams commits to Iowa...
Katie Adams practices due diligence every day with her running, so it only made sense to follow that same pattern with her college recruitment. (via www.mchenrycountysports.com)...

Marengo's Adams Wins 1,600 At State; 2nd In 3,200...
Marengo’s Katie Adams needed to run against Freeburg’s Kristen Busch in person and not against Busch’s time. In a rarity, Adams won the fast heat of the Class 2A 3,200 meters at the IHSA Girls T...