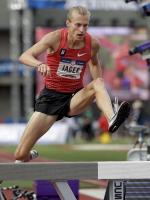 Class 3A Boys Pre-Season Distance Preview...
Distance running  is going to be strong once again with some of the deepest events on the docket...

Road To London Throwback: Evan Jager...
As a kid growing up in Algonquin, Illinois Evan Jager was like the Energizer Bunny, he just kept going and going. Jager's endurance and love for running transitioned from soccer to track and field and...

Evan Jager's Unorthodox Journey to a Silver Medal...
A look at the life and career of Evan Jager, from his college days to a big moment in his life....

Road To Moscow: Evan Jager...
Evan Jager has come a long way from his days at Jacobs High School in Elgonquin, Illinois. Jager is one of the top American distance runners and steeplechasers. We take a look back at his road to the ...

Tony Prepster's Summer Weekend Recap...
The off-season nowadays is hardly off-season. There are all kinds of post-season meets to attend and watch.  For instance, one can choose a variety of smorgasbord venues: Junior Nationals, Senior Nat...