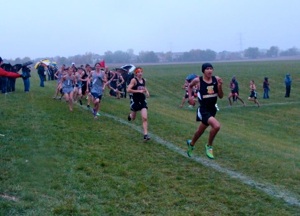 Going into the week of conference, the mind mentality of the season starts to change. We realize how far we have come and how much is actually left. For me, conference is the first step in the journey to the state meet. It is a highly anticipated and highly intense race. Coach Gummerson felt the team this year was as ready as ever to defend the conference title. A title we had won in the previous six years. To a Minooka runner a conference championship is always on the to-do list.
During the week leading up to the meet I felt as if the team was more focused then they usually were. We were well aware of the great competition the SPC meet has to offer and that nothing would be handed over easy. There is a mutual friendship and respect between the teams in the conference. We all know each other well and always enjoy the opportunity to race against each other. There is no other conference quite like it in the state, I feel.
The theme Coach mustered up for this meet was a book he had read over the summer, One Shot at Forever. He used the name to motivate this year’s conference squad.  Coach Gummerson felt we could use that and have our “one shot at forever” for ourselves. There was no doubt that we knew what was in front of us and that the other teams in the conference were ready as well. 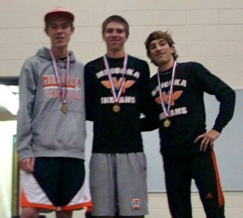 It was an extremely rain filled afternoon at Plainfield Central High School. The most rain I had ran in for a long time. The effect some thought the rain would have on our guys did the exact opposite. The poor weather did nothing but motivate and boys and I. We were really looking forward to running in those conditions.
In the end, it was an amazing race by all the runners. Up front it was a three man battle all race with good competition. Our guys fought as hard as they could against the weather and the amazing performances of the other teams in the race. We finished fourth as a team behind two great Plainfield programs from East and South, and an awesome Oswego team. It was tough to take fourth, but we know we fought hard and the other teams ran the better race.
Individually, I finished with the win and my second straight conference title. It was somewhat emotional because of how proud my coaches were and how I accomplished a goal I had set for myself at the beginning of the season.