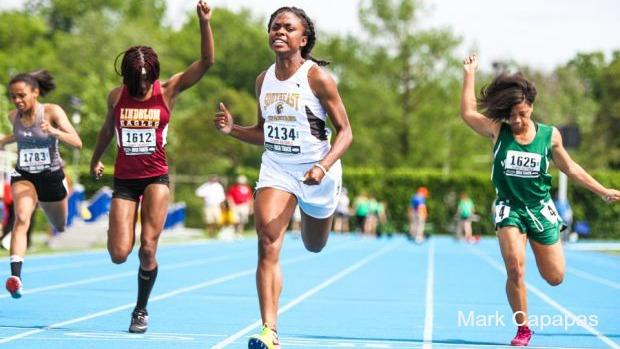 It should another good year in the Century this spring, featuring some quality sprinters

100m-
2018 State Champion: Tina Martin (Decatur Eisenhower) 11.80 [0.0]
Key Returners: Serena Bolden (Sr., Springfield (Southeast), Treasure Keyes (Sr., Chicago Lindblom), Wynesha Rodgers (So., Chicago Morgan Park), Jayla Campbell (Sr., Olympia Fields [Rich Central]), Lauren Doerr (So., Morton), Dareale Sykes (Sr., Park Forest [Rich East]), Myah Sherman (Sr., Park Forest [Rich East]), Makiah Sherman (Sr., Park Forest [Rich East])
Season Outlook: Not enough respect has been put on Serena Bolden's name when it comes to the open sprints- specifically the Century. Her tremendous success in the jumps is probably why. That may change this season because after placing second in the state and having the top returning wind-legal mark of 11.86, it's hard to conceive anyone challenging her. The LSU signee will look to burn the track up under 11.70 this season and earn the queen of sprints title.
In terms of the event itself, there are some girls that you may be a bit more familiar with via the relay's route. Treasure Keyes and Myah Sherman are the key reason's why their teams have been successful in the 4x1 and 4x2 over the past few seasons. Keyes was an individual state finalist here a year ago and Sherman just missed out. Wynesha Rodgers was the only underclassmen in the finals field a year ago for the Mustangs.
Tweets by MilesplitIL