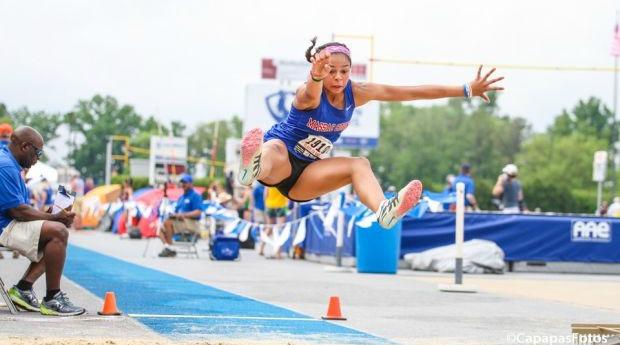 Long Jump-
2018 State Champion: Erika Furbeck (Geneseo) 19-11.25 [-0.1]
Key returners: Serena Bolden (Sr., Springfield Southeast), Summerlyn Smith (Sr., Mattoon), Alexis Feaster Jr., Greenville), Dya Jackson (So., Metropolis [Massac County]), Amy Pineda (Sr., Eureka), Gina Misek (Sr., Morris), Arianna Walker (So., Rich South), Lillie Simons (Jr., Marengo)
Outlook: Two of the best performers in state history have left the building. Two-time state champion Erika Furbeck is now at Iowa State while Imani Carothers has planted her flag in the peach state for the University of Georgia. Both stallions were 20-foot performers during the last two seasons. Despite their losses and a bevy of talented seniors, there is enough depth to keep the event strong. Serena Bolden enters the arena as the third best returning performer in the state regardless of conditions with a 20-2.5w stamping. That mark was at the expense of altitude in New Mexico and a gusty +4.8 wind. But Bolden has a 20-1.25 and 19-4 in friendlier climates. Despite this being her secondary event behind the triple jump, Bolden placed third in last summer's AAU National Championship final and she has the US #7 mark.
Summerlyn Smith and Alexis Feaster are the other two returning all-staters. They peaked at the right time during the sectional and later in the state meet dropping mid 17-foot efforts. There were some near misses on the scene as well. Top returners Arianna Walker, Amy Pineda, and Gina Misek are top five returners- Pineda has the second-best mark at 17-11.
Tweets by MilesplitIL