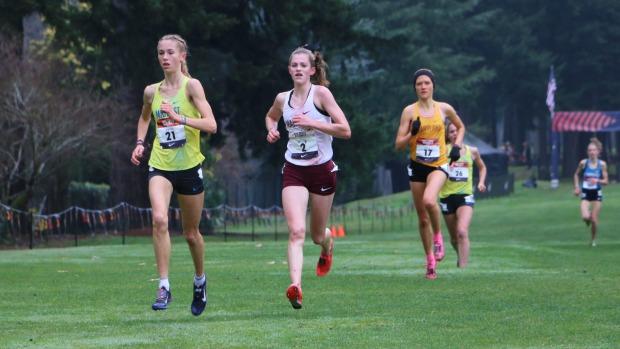 The day started off with a much anticipated girls championship race. Coming into the week everyone knew superstar junior Katelyn Tuohy of North Rockland (NY) was the lockdown choice to defend her title. The bigger question was who is going to place second behind her? Two names for the Midwest were brought into the equation: juniors Taylor Ewert of Beavercreek (OH) and Katelynne Hart of Glenbard West (IL). Ewert was coming off a second-place finish at the Foot Locker Midwest Regional beating "KK" in the process making the season series between them tied at 1-1 after Hart's MW NXNR win.

Ewert proved to be the "dual threat" once more after an amazing third-place effort in 17:06 behind the record-breaking Tuohy (16:37) and senior Kelsey Chmiel of Saratoga Springs (NY). Ewert who is a national champion in racewalking and the steeplechase, really showed what she can do against the nation's best. "Going into the race my goal was top 5, but to definitely place higher than last year... looking back I am overjoyed with my race and ready for Footlocker," said Ewert. Her great performance was set up by a solid opening mile in 5:16.3. Ewert was able to maintain her status through the second mile (10:52). A strong finish no doubt solidified her as someone to watch very closely moving forward. It also readies the superstar in the making for next weekend's Footlocker final in San Diego.

Hart is a phenom in her own respect but she may have been feeling the wear and tear of a long season that started back on September 8th. After taking fourth place last year, the expectations were high for her as she became only the second girl in the history of Illinois to break the 16:00 barrier for three miles. Hart looked strong through the first two miles being in the top six, but couldn't get her legs moving for the final 1.1 miles running a 6:33 for it. Expect to see KK redeem herself at Foot Locker Nationals.

Probably the most shocking performance from a midwest runner was by Alex Morris. The Naperville North senior really flew under the radar for the first half of the season- not racing much but slowly but surely putting together solid performances. The 2017 NXN all-American was able to maintain her composure of a torrid early pace, moving from 11th to 8th to 7th through each mile marker. The end result was a splendid 17:25 which more importantly aided the team's championship aspirations.

Freshmen Lianna Surtz of Aurora Rosary (IL) and Katrina Schlenker of Batavia (IL) could have come into this affair starry-eyed over the amount of tremendous talent before them. But instead, they embraced the experience that NXN had to offer. The end result was 24th and 27th places respectfully. They were the 2nd and 3rd best freshman in the race. Surtz ran the fastest time by an IL freshman girl on the Glendoveer Park course in 17:40.6. Schlenker was just 2.2 seconds in back at 17:42.8. The future is incredibly bright for these yearlings.

Naperville North girls cement their legacy with another top finish-

The team battle caused 21 girls to be anxious on the awards podium. A little background before we continue. Nike holds all of the results and waits to release them until after the team awards take place to build up suspense. To further the suspense they also call up the top three teams in alphabetical order and announce the results. They started off with the third place team which was Wayzata, MN. The runner-up team waited to hear their name be called... Naperville North it was announced publicly over the park loudspeakers.

This is their second straight year being the runner-up at the national meet. The Huskies were lead by the 7th place performance of Morris, but what really helped was the strong pack running ability from their 2-5. They kept their split down to 21 seconds with senior Claire Hill stepping up big time for the Huskies being the team's second runner and placing 72nd overall. The Huskies are returning four members from this squad and it will be fun to see if they can possibly win the title.

Yorkville built off their performance from last year by placing 13th. Coming into the championship,  the hope for the Lady Foxes was a top-five finish after a strong showing at the NXR Midwest Regional. The long layoff between meets may have played somewhat of a factor in how they performed as they hadn't raced for three weeks. A factor may have been sophomore Helena Kleronomos who didn't have her best outing as she was the team's sixth runner after being a top three runner all year. Senior Olivia Borowiak indicated that they stuck to their race plan. "It was a tight pack throughout the race, and settling wasn't really an option." Maybe the Foxes just didn't expect the race to go out the way it did and lead to their performance. Still, 13th in the nation is nothing to get down about. It is amazing. A huge congratulations to senior Emily Eberhart who placed 39th overall with a 17:57, this may have been her best race she has ever run after battling injuries in the past.