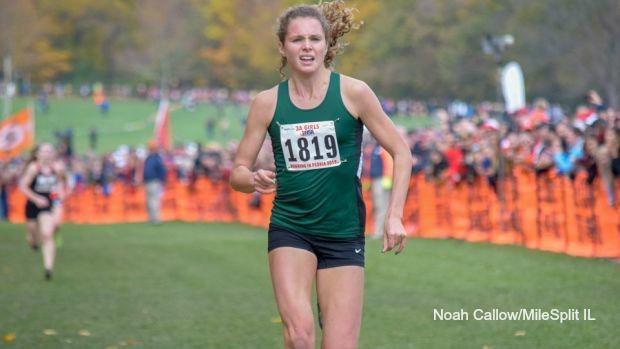 In order to beat Katelynne Hart, one needs an out of this world race, but even then it is not enough

The last girls' entry on the fabled Detweiller Park course was going to be fast and dangerous. Let's find out.

#1 Naperville North, #2 Yorkville, and #3 Downers Grove South came in as arguably the three best teams ever collectively in one season. None of the three teams have lost to anyone outside of their circle, and that includes the nationally heralded Roy Griak Invitational in which Yorkville won by 11 points over Naperville North. That would be the first and only time the Huskies lost a race thus far in 2018.

After the battle in Minnesota concluded, nothing swayed that notion. It has only intensified.

As for the race itself, the Huskies as expected knew they had to withstand Yorkville's amazing trio of sophomore Helena Kleronomos, junior Kailey Fox, and Emily Eberhart who could potentially place three scorers in the top 10. But guess what? Naperville North could potentially put five girls in the 30. If that were to happen, it means Yorkville would come up short.

Immediately, the Huskies attacked the Foxes with a lathered up front-runner in the name of senior Alex Morris who ran from the very top throughout the race. They needed her to produce a low score and at the very least keep the "three-headed" monster behind her. Morris would complete a perfect race running 16:10 and third overall. But the Huskies weren't done as they sprayed the top 25 scoring ledger with four scorers. Sophomore Maggie Gamboa (15th), Campbell Petersen (18th), freshman Lucy Westlake (20th), and sophomore Audrey Mendys (24th) got the job done. But on the other side, the Foxes got Kleronomos (5th), Fox (9th), and Eberhart (10th) inside the top 10. The result was a narrow 80-87 win and a third consecutive title for the Huskies.

Downers Grove South held their end of the bargain taking third on the strength of junior Brenna Cohoon's 8th place finish. The Mustangs scored a rock solid 127 points and the scoring split was 55 seconds. They ran as well as any team with the hope of earning a team trophy for the first time in school history.