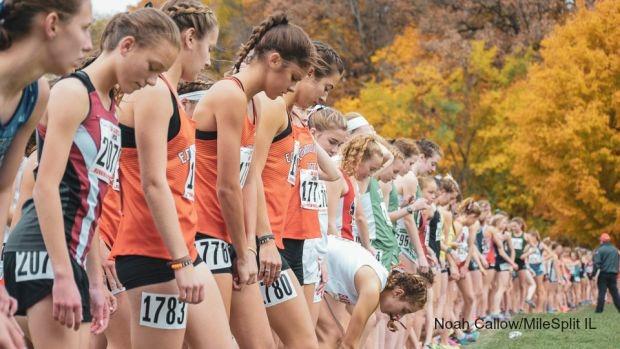 Class 1A kicks off festive day-

The first race of the day was met with extremely high expectations for fans, athletes, and coaches. #1 Tolono (Unity) was guaranteed a virtual lock on the team title before the gun started off. However, #2 Eureka had other plans and was ready to upset the balance of power. Many did not give the Hornets a stinging chance of beating the defending champions. But senior star Emma Argo knew she and her teammates could get the job done. Argo did her part by winning her second consecutive crown in a personal best 16:59. Teammates sophomore Alexi Fogo and senior Tessa Wiegand assisted with all-state honors in 14th and 24th place respectively. The final tally was a resounding victory over #5 Rock Falls 84-123. Unity collected themselves enough to earn the third place trophy with 130 points.

Argo as mentioned previously won the individual title comfortably over a tough foe sophomore Lydia Roller of Staunton. Argo and Roller traded blows for about 1.75 miles before Argo pulled away for good. Roller clocked a personal best 17:16 to hold off Amelia Mclain of Benton who also ran a personal best 17:26. Liberty's Katelyn Robbins returned from an injury-riddled junior year to close out a tremendous senior season to take third fourth in 17:29. Sophomore Karlie Hey of Sterling (Newman Catholic) closed out the top five with a time of 17:29. This was the fastest ever class field in terms of times as it took 18:15 to make the medal stand. Overall, 67 girls broke the 19:00 threshold.

2A Girls endured surprises and the same ol' same ol'-

Vernon Hills and Belvidere North came in as the overwhelming best teams in the class. That did not change once 12:30p rolled around and the results began to pour in. #2 Belvidere North won their second title in three years with a score of 113 points to easily defeat #1 Vernon Hills who scored 148. The key to victory for the Blue Thunder was the clutch upfront running by juniors Gianna Sagona and Madison Diercks who placed sixth and seventh respectively with times of 17:19 and 17:30. Crystal Lake (Prairie Ridge) earned their first trophy taking third with 219 points.

As expected the two favorites Lianna Surtz and Brooke Stromsland of Lake Villa Lakes duked it out for the title. Surtz, a freshman sensation from Lakes, came into championship hot as a firecracker. She did not waste any time in setting a fast pace that took the leaders through the first mile in 5:22. Stromsland was able to stay poised throughout the three-mile affair and finally pulled away for the victory 16:32-16:35. Chicago (Latin) teammates Marianne Mihas and Ava Parekh took third and fourth with personal bests 17:04 and 17:08. Defending champion senior Jenna Schwartz of Waterloo placed fifth in a season-best 17:14.

3A closed out a thrilling day of cross country-

#1 Naperville North, #2 Yorkville, and #3 Downers Grove South came in as arguably the three best teams ever collectively in one season. After the battle concluded, nothing swayed that notion. The Huskies as expected withstood Yorkville's amazing trio of sophomore Helena Kleronomos (5th), junior Kailey Fox (9th), and Emily Eberhart (10th) who placed three scorers in the top 10. They hit back with their own front-runner senior Alex Morris who took third overall. But the Huskies weren't done as they sprayed the top 25 scoring ledger with four scorers. The result was a narrow 80-87 win and a third consecutive title for the Huskies. Downers Grove South held their end of the bargain taking third on the strength of junior Brenna Cohoon's 8th place finish. The Mustangs scored a rock solid 127 points and the scoring split was 55 seconds.

The amazing Katelynne Hart did exactly what we expected her to do even if was unorthodox. The junior superstar from Glenbard West set the tone of the race with a blazing 5:10. It was the second fastest ever opening mile behind course record holder Judy Pendergast who ran 5:08. From there it was a game of cat and mouse as freshman Katrina Schlenker and Morris chased after Hart. They worked as a tandem in keeping Hart honest. Hart is not a stranger to close races. In last year's final, she ran shoulder to shoulder with Evanston's Enyaeva Michelin for 2.5 miles before pulling away for a narrow victory. This time she was able to maintain a five to seven second lead for most of the race. Hart closed the win out in a personal best and all-time #2 15:59. Schlenker took second ahead of Morris 16:07-16:10. Schlenker ran the fastest ever for a freshman and fourth fastest ever regardless of conditions. Morris is rated #2 in school history behind Pendergast. Another star freshman Aly Negovetich of Grant held off Kleronomos 16:33-35 to close out the top five spots.

LOOK FOR FULL RECAP OF ALL THREE CLASSES SUNDAY AND MONDAY