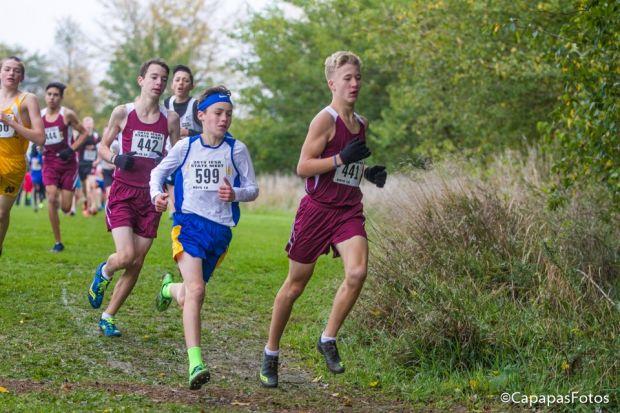 St. Benedict of Chicago got out fast and never slowed down until the finish line

Defending girls champion Chicago (St. Benedict) returned the majority of their team which included top runners Sophie Keenan, Emma and Maggie Owens. This year the expectations would be a bit different with as many as four teams to be considered. St. Thomas of Palatine was one of those teams that were dangerous. It is a school known to feed powerhouse Palatine High School quite well in recent times. But as it turned out another school from Chicago would be victorious. Old St. Mary's won the title despite being low pointed through four scorers. St. Ben's could not overcome their season long Achilles heel- the fifth runner.  Old St. Mary's won 117-122 because their fifth runner Karina Casanova placed 31st to St. Ben's Eva Nehring's 63rd placement. St. Thomas would take third with 125 points. Eighth-grader Maria Stedwell of Peoria St. Jude would repeat as champion with a time of 11:49.

All season long on the IESA boys circuit was a tiny school named St. Ben's. The Bengals were a brash and confident bunch of youngsters from the north side of Chicago who when they step on the cross country court, expect to win. And when the results are in it is usually by a tremendous amount. The state finals would be no different as William Archer, Matthew DeSantis, Jack Rhyner, Diego Morales, Owen Flom, Hunter Whitney, and Declan Ochoa continued their winning ways. They slaughtered a good field with an unbelievable score of 22 points. Collectively, their aggregate time was the best of all three class winners. And the debate of who is the best middle-school may go on, but the results speak for themselves as the runner-up Old St. Mary's finished more than 100 points behind with 129. The winner was Archer who pulled away just after the halfway point with a time of 10:38.