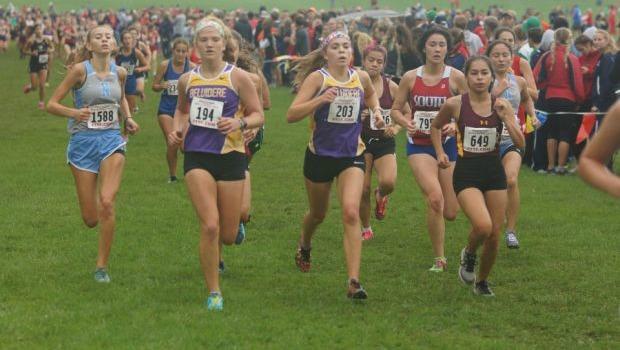 While this meet has flown under the radar for even the most dedicated cross-country fans, the Freeport Invitational still has its own cast of superstars. The past two individual winners on the boy's side have gone on to become state champions in 1A and 2A, so this meet has a short yet rich history of competitors.

Headlining the team standing is Maple Park Kaneland. The Knights won the varsity race with 26 points and perfect scored the fresh/soph race. Kaneland is an incredibly talented team; they placed fourth at 2A state last fall and had the state champion Matthew Richtman. Belvidere placed second last year, but they were a mostly senior squad so they are not looking the best. The real competition for Kaneland is Rock Falls. They are led by a deadly one-two combo of junior Dawson Smith and senior Matt Laws. The Rockets have great potential to get on the podium at 1A state once they really find their footing as a team.

The dark horse of the team race is definitely Winnebago. The Indians is an excellent pack running team. Last year, there were only 86 runners in the varsity race, so each place is everything. While they may not be the fastest team statistically, if their pack can get ahead place wise they will do just fine.

For the individual title, it's really a toss-up between junior Daniel Occhipinti of Kaneland and Smith. History favors Smith as he placed second last year with Occhipinti in third. The two battled it out last week at the Rock River Run in Sterling and Smith came on top by about 8 seconds. Both of them are excellent runners who could both put up a fight when it hits the fan. Fellow junior Chris Metz of Freeport might throw his name in the fight too. Last year Metz was about fifteen seconds behind Occhipinti and has that added bonus of trying to defend his home turf. This meet is great as it pits teams who rarely get a chance to race against each other.

The girl's side is looking very similar to the boys as far as team placing goes. Kaneland continued their dominance by winning the varsity race and placing third in the fresh/soph. The Lady Knights ended their season last year with an eighth-place finish at 2A state last year, they only last one senior of that squad so they remain a fairly young team. The ceiling is really the roof for this squad. Finishing second last year was the ladies of Rock Falls. If you know 1A cross country, you know Rock Falls. The Rockets mainly tempo the first two miles or so before really blasting off: leading the pack is the duo of Bailee Fortney and Alex Gomez. An injured Rocket squad placed seventh last year at 1A state.

Again, the sleeper pick in the team standings is for sure Winnebago. The girls have a better chance at winning than their male counterpart, as they have shown more consistently throughout the season and continue to shock many on their dark horse run.

On the individual side, Kaneland junior Rachel Richtman looks to repeat her sophomore victory over Fortney and Gomez. Rachel has an excellent chance of matching - if not surpassing- the achievements of her older brother Matthew and her future is a bright one. The trio met up last week at the Rock River Run and Richtman continued to reign, which just fuels Fortney's fire. Aside from those three, sophomore Natalia Martino of Winnebago will throw her name in the race, attempting to show she can race with the big girls. Shortly behind her should be freshman teammate Katie Erb, who has put up some fast time during her freshman campaign so far. Lastly, senior Katherine Bakken of Rochelle will try to put her foot in the race as well. Bakken actually broke up the Rock Falls duo at the Matt Walter Invite on Wednesday, September 26th to secure a second place finish behind Fortney. As previously stated with the guys, the Freeport Invitational is a great meet filled with teams who rarely race.