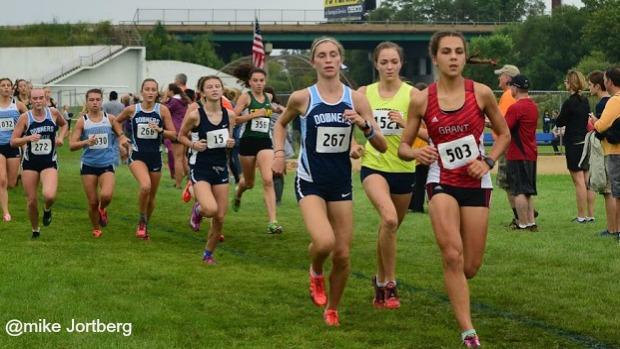 It was initially dubbed "The Labor Day Blowout Weekend." But instead, the first anticipated weekend for cross country turned out to be a dud in many respects.

Thousands of athletes were left bummed on Saturday morning as weather storms canceled multiple meets across Northern, Western, and the Chicagoland area. But the worst part is that many athletes will not be able to race again for another two weeks.

The highlight of the weekend, the Hornet-Devil Invite was one that many were looking forward to on the Labor Day weekend, especially in light of superstar US #4 Katelynne Hart of Glenbard West for her invitational debut. On a wider scale, many key teams that were attending such as Wheaton-Warrenville South will not be able to prove their worth yet as the #1 pre-season pick on the boy's varsity level and #3 pick on the girl's varsity level. We will also miss out on other good squads in the mix such as Glenbard West (Girls), Neuqua Valley (Boys), Naperville Central (Boys), and Hinsdale Central (Boys and Girls). Many parents and spectators were left closed off from the meet until the eventual cancellation after numerous thunder delays.

Other meets such as the Lyon Township "Mike Kuharic" Invite, Leavey Invite, and the Galesburg Invite were all canceled by the unexpected storms. Even a few out of town meets called the wrath. The #1 girls team in Illinois Naperville North was washed out in Iowa at the Pleasant Valley Spartan Invite.

However, for every four downsides, there must be a silver lining somewhere...

Athletes at the Harvest Christian Invite in Elgin didn't let the weather to dampen their spirits during the thunder delays as the weather cleared quickly in that area that allowed them to finish the races. Since many teams weren't able to run their athletes this week, they will be definitely going all-out in the next round of meats to prove their worth.

One meet in the Chicagoland area that remained patient with Mother Nature's mood swings was the Early Bird Invitational hosted by Fenton HS in honor of its legendary coach John Kurtz. The event is one of the few that is hosted on school grounds where fans can view a large portion of the meet. Meet officials combined the boys and girls undercard races into one per gender to salvage the competition. The girl's portion saw 3A #1 Downers Grove South blow away the field tallying 26 points with a 44-second scoring spread. The winner was emerging freshman Aly Negovetich of Grant in 17:54. The boy's race was a stark contrast as 3A #3 Hersey and #4 Glenbard West tied 32-32. Glenbard West would take the title on the sixth man. Senior Rory Cavan took home the victory for his Hilltoppers quad in 15:01. In fairness to junior Josh Methner of Hersey who led for much of the competition, got lost and had to settle for second in 15:04.

Central Illinois enjoyed 1A girls powers #1 St. Joe-Ogden and #2 Tolono (Unity) tangling at the Chrisman Cowchip Classic. The flight race was dominated by Unity who scored 22 points. Flights, of course, are much different than traditional top 7 outfits. According to Class A cross country expert Dave Behm, he believes that Unity is the best team in the classification regardless of format. "Unity [should be] the #1 ranked team... by far," he said. The dominance came without top runner senior Jordan Harmon who sat out. The bright spot for St. Thomas More was junior Fran Hendrickson winning the championship flight in 18:56. Senior Garrett Dixon of Monticello paced the boy's championship race in 15:34.

The far southern section of the state saw some impressive performances in hot and humid conditions. The anticipation of the season debut of girls senior ace Jenna Schwartz of Waterloo will have to wait another week. The defending 2A state champion was battling a severe cold. Instead, it was Edwardsville and its rising star Abby Korak win comfortably in 17:52. The 14th ranked Tigers dominated the field with 58 points. The boy's race was supposed to be a showdown between the veteran senior Andrew O'Keefe of Granite City and freshman Fiker Rosen of Quincy. O'Keefe pulled away during the second half of the race to win in 15:10. Rosen performed well with a personal best 15:28 to take 5th place. Missouri power St. Louis University got by #11 Edwardsville for the title 75-80.

Many athletes rising in their junior and senior year will be taking the September ACT as apart of their college admissions next Saturday, and many will have to miss their scheduled meet as a result. This may leave some teams missing key players at the Lake Park Invitational and the First to Finish down in Peoria next week. Coaches will have to rearrange their varsity rosters accordingly to fill in the missing spots.

There's more rain that's forecasted in the next weekend of meets, so let's hope Mother Nature will change her mind.