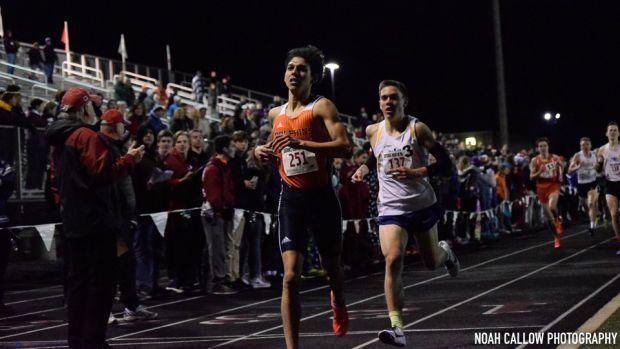 Preview: We will see the season debut of the standout track athlete, Katherine Olsen (DeKalb) here. Olsen ran some fire times on the oval this past season including 2:18.41 in the 800m, 4:59.07 in the 1600m, and 10:42.48 in the 3200m. The impressive part about Olsen's 3200m PR is that it came in the blazing heat that occurred during the finals of the state meet. The chase pack behind Olsen will probably be about a minute behind and it should include the likes of Hannah Anderson (South Elgin), Madison Polinski (Lockport), Elizabeth Bollinger (Lockport), Cassidy Martin (Plainfield South), Abbey Kozak (Lockport), Anna Kozak (Lockport), and Alexandra Skibicki (Lockport). Lockport should walk away with the team title pretty easily at this meet as they have such a great top 5 pack that should all finish within the top 10 places. Lockport's 1-5 pack should have a split around 25 to 30 seconds which should easily propel them to a win.

On the boy's side, we will get our first taste of the dynamic duo of Sam Rivera and Charlie Nevins of Whitney Young. Rivera and Nevins are far above anyone else in this field and should be about 30 to 45 seconds in front of the rest of the field. Rivera is trying to rebuild his name as a cross country runner after his disappointing season on the trails last year. Rivera got injured during the summer and when he came back he just couldn't regain the dominant performances he had his sophomore year when he took 26th at state. Rivera came back during track running some great times in both the 800m and the 1600m including PR's of 1:55.97 in the 800m and 4:13.47 in the 1600m. Nevins is trying to redeem himself after an ok track season. Many thought Nevins would be a great track runner after him coming off a breakout state series for cross country and ended with him being an all-stater. Nevins ran times of 2:01.59 in the 800m, 4:32.25 in the 1600m, and 9:27.12 in the 3200m. The chase pack behind Rivera and Nevins should include the likes of Jacob Trapp (DeKalb), Aidan Donohue (DeKalb), Riley Marks (DeKalb), Jace Warrick (South Elgin), Julian Mines (Joliet Central), and Javy Garcia (Plainfield Central). Whitney Young is the favorite to walk away with the team title as they are the only ranked team in the field, but don't count out DeKalb as they have three guys that went sub 16:00 last season and if they got a 5th runner then they may be able to defeat the Dolphins.