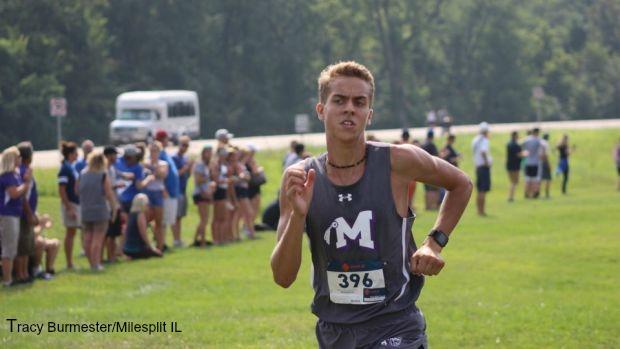 The First to the Finish Kickoff Invitational held in Edwardsville, Illinois on the SIU-E cross country course has quickly become a staple season opener for both large and not so large schools throughout the state. Approximately 50 schools competed in the high school races, with an additional 40 schools competing in the grade school race.
Lydia Roller of Staunton came to defend her title after winning the meet as a freshman in 2017. Her time of 19:58 was comparable to what she ran a year ago, and in hot and humid conditions on a wet course. From start to finish she ran solo, setting the pace for herself. Breanna Chandler (Jr) of Freeburg and Veronica Hein (Jr) of Decatur St. Teresa ran side by side for the majority of the race behind Roller. Chandler, finishing in 20:53, showed her strength on the course when she separated herself slightly from third place just before two miles and gained a 13-second lead off of Hein (21:06) in order to secure second place. Maddie Karcher, a freshman from Hamilton County, ran 21:22 for fourth place honors and Riley Vickrey (Jr) of Alton Marquette finished in 21:48 for fifth.
A total of 266 girls competed in the race. Mascoutah had their top four runners finish among the first 20. Their team point total of 75 earned them another first-place finish at the meet. Freeburg also had strong placings from individual runners with two in the top ten and a third in the top 20. They totaled 95 points for second place, with Mater Dei (121) third, St Teresa (143) fourth, and Althoff (220) fifth.
A fight to the finish was expected in the boys' race with FTTF Kickoff champion Jackson Stewart (Sr) of St Teresa and 2017 all-stater and then freshman phenom Justin Mumford of Wesclin returning to the scene. However, Mumford, who has been dealing with an injury, did not compete. Nonetheless, a memorable race was captured to start things off for the 2018 season.
Stewart led things off from the beginning while a group of three was shortly behind and led by Corbin Schwable (Sr) of Freeburg, all coming through the first mile at roughly 5:08. Coming into view just past the two-mile mark was still Stewart and now Blake Morris (Jr) of Cape Girardeau Notre Dame, MO clearly in second, and Caleb Cornelius (Sr) of Saxony Lutheran running in third. Cornelius was not one of the three running in the front pack behind Stewart at the mile marker. In fact, he was back about 15 seconds from the leader and running in ninth. Morris continued to make moves through the last mile of the race, and as runners came into view heading for the finish, Morris was now the clear leader. He clocked a time of 16:39 for the win, followed by Cornelius in 16:51, and then Stewart in 17:08 for third. Casmir Cozzi (Sr ) of Mascoutah improved on his performance from a year ago (16th) to place fourth in 17:21. Tyler Guthrie (So) of Father McGivney Catholic also improved from an 18:04 25th place finish a year ago to a 17:33 fifth place finish.

376 runners competed in the boys' race and Mascoutah once again came out on top with 90 points. The Freeburg boys' team was also consistent and placed second to the Indians with 102 points. Rounding out the remainder of the top five placing teams were Rochester (191), Columbia (196), and Herrin (250).