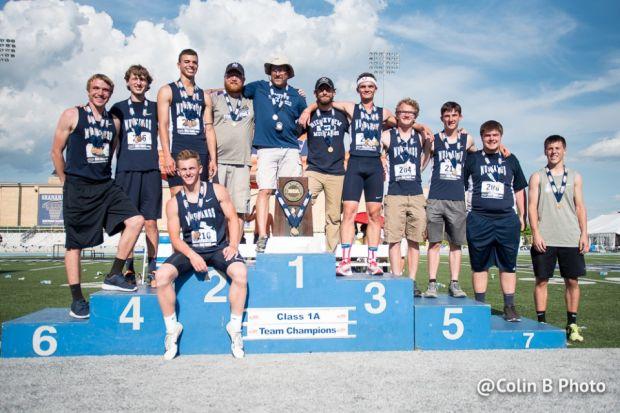 -The top-ranked team Colfax (Ridgeview) rode into Charleston with high expectations of winning their first title. But during the prelim on Thursday, the Mustangs were hit with a roadblock.  Star competitor junior Mason Barr was late for check-in and was not allowed to compete in his 300H heat. Barr came in as the defending champion and one of the state's overall best long hurdlers. Barr was able to recover and qualify in the subsequent 200 and 4x400 heats for his beloved Mustangs. Along with fellow ace junior Tate Walcott they were able to pull off the feat of victory.

Rockford Christian was thought to have the most complete team in the field because of their distance, sprints, and relays. The Royals did not fully materialize. Maybe in the future, they would be better suited to find a way to maximize standout athlete Riley Wells.

The events are solid all the way around-

It was an interesting weekend for Connor Artman (Sr., Illini West) who had been regarded as one of the state's top overall athletes. Artman got through Thursday's prelims well and was looking forward to some downtime until either a prank or a group of uncouth wise guys wanted him for a BB gun target practice in the shower. A trip to the hospital for treatment and back to the track and field where he belonged.

Artman produced some great marks right out of the gate during some of the nation's most high profiled meets. One of those meets was the New Balance Nationals Indoor Championship in which he earned All-American honors. He walked out of the indoor season as the state's best long jumper with a personal best 23-11.5. But down the stretch, Artman cooled off considerably. Enter the aforementioned Tate Walcott who lurked in the shadow despite winning competition after competition. Finally, on the big stage, he punched his competition in the mouth with a 23-11.5. Artman crept up with a 23-3.75 to make things interesting. He could not get untracked and Walcott put things out of reach with a US #8 24-0.25.

Kyle Kruthoff (Jr., Erie) exceeded expectations with his personal best height clearance in the pole vault when he cleared 15-6. The one-foot improvement should give him the confidence of soaring over 16-feet next year.

Peyton Sopiars (So., Galva) led a young triple jump field with a win 45-0.75. He is an emerging athlete as is the event in Class A.

The state's 2nd best shot putter Hunter Woodard (Sr., Tuscola) happens to be one of the best in the country with his 63-0. IL#7 Andy Bird (Sr., Warsaw) was expected to challenge Woodard for the title. That never materialized as Woodard won by over four feet over Bird 60'4.5"-56'3".

Jorden Tedford (Jr., Warrensburg-Latham) avenged his loss to Cameron Getz (Sr., Meridan) who beat him at the Illinois Top Times. Tedford had a career day with a 6-8 winning effort. 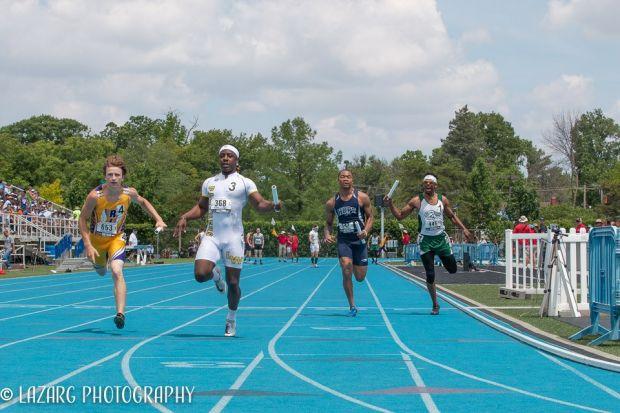 The first official full-fledged event of the day was the 4x800 relay. Morrison came in with the fastest time of the day with an 8:08.43. On the strength of the already solid effort was the fact that the quartet was all freshmen. In the final, some inexperience reared its head as the lead runner Nick Allen got boxed in. He successfully navigated his way out of it and the rest is history as the squad full of sophomores finished in first place and copped the classification's top time of 8:00.59.

Warrensburg-Latham with the Lewis twins Diondre and Dionte overpowered the competition and it was a wrap when Dionte streaked home in 42.43. No other team broke 43.00.

Walcott and Barr came through for Ridgeview once again in the 4x200 as they did a year ago. They strode home in 1:29.06.

Easton leads the way in the speed department-

It was almost a seasonal derailment for Easton Bianchi (Sr., Sterling Newman Catholic). After a very strong indoor season, Bianchi was on the shelf with a hip and hamstring injury. It wasn't until his conference championship that he became well enough to make a run at defending his titles. Entered in the 100 and 200, Bianchi rolled the fastest times in the prelim with 10.83 and 21.93. He would not disappoint the fans on Saturday. Bianchi smashed the Century field with a 10.60 (+0.5). Diondre Lewis (Sr., Warrensburg-Latham) was the only other sprinter under 11-seconds and he ran a distant 10.89. Bianchi without the guidance or hindrance of a wind reading won the 200 in 21.73.

Xavier Ross (Sr., Timothy Christian) and Charly Tshibuabua (So., Rushville-Industry) were the only ones under 50-seconds during the 400m prelims. Tshibuabua used a strong kick down the homestretch to Makail Stanley (So., Argenta-Oreana) 49.17-49.34. Ross was third in 49.41.

AJ Christensen (Sr., Forreston) came into the finals with the top seeds in the hurdles. The first was an easy win in 14.37. Barr placed 2nd and Artman took 4th. Later in the 300H, Christensen 37.97 to easily win the title.

The opening race was the 3200m where blazing weather conditions dictated the pace. Jack McNabola (Sr., Chicago Francis Parker), Logan Hall (Sr., Arthur), and Wyatt McIntyre (Sr., Athens) stuck to the script and crawled through the first mile in 4:52. Soon after Noah Smith (Jr., El Paso-Gridley) grew tired of the boring pace and bolted into the lead and tried to speed off. He was later recovered by McNabola and Hall who ensued in a fast finish. McIntyre tried in vain to be a part of the action but could not. McNabola was able to hold off Hall in a furious finish 9:24.68-9:25.14. McIntyre settled for third in 9:33.29.

In between the best distance runners in classification history was the 800m. Already billed as the deepest and most talented Class A field in history, the overall quality did not disappoint. Top-ranked runners Riley Wells (Jr., Rockford Christian), Jacob Bryan (Sr., Illini West), and Shane Yamco (Jr., Riverton) set a solid opening lap pace. Wells was able to outlast Bryan for his second straight title in 1:53.72. Bryan ran a personal best 1:54.11 and Yamco took the bronze in a PR 1:54.33. Four runners broke 1:55, seven were under 1:56, and it took 1:57.66 to medal. All 12 finalists broke 2:00 which is a record for the classification.

Hall completed his IHSA career with a victory in the 1600m. The U of Illinois bound standout took matters into his own hands when it mattered most. On the penultimate lap, Hall was in the catbird seat. With less than 200 to go it was his turn to unleash his kick and unfortunately, McIntyre was on the downside of it again. Hall ran 4:22.45 for his first-mile title.