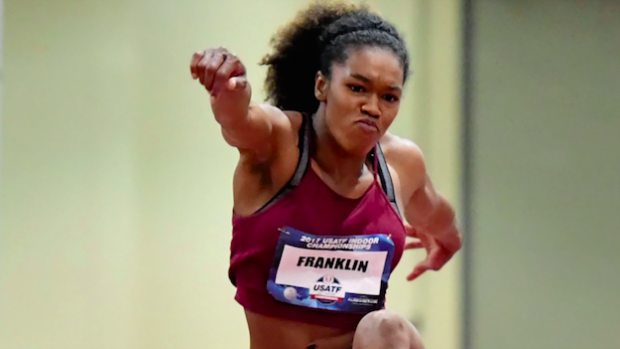 Isn't it ironic on a weekend where the top three triple jumpers of their respective groups competing, the potential of big records being broke was at an all-time high? On Friday at the Texas High School State Championship, it was junior phenom Jasmine Moore of Mansfield Lake Ridge leaping a sickening 45-4.75 [+3.8]. Though Moore did not legally get the national record held by protege Keturah Orji, she was able to bookmark the all-conditions title. Orji is the collegiate record holder at the University of Georgia who once held the American record: 14.71 (48'3" +0.0).

Enter Tori Franklin. Franklin has always been a great athlete dating back to Downers Grove South HS when she anchored her team's 4x400m relay to a state runner-up finish. It could be argued that she had more promise as a 400m sprinter than as a jumper despite jumping over 41-foot by the time she entered Michigan State University. Even after earning several All-American plaques, no one could fully predict what would come next.

Franklin linked on to several support systems after graduating college. Take Notice Sports Management led by former standout jumper Lamont Dagen (Lane Tech HS/Chicago St), Andreas "Andy" Pavlou (coach), and Oiselle apparel for women to name a few. The payback has been enormous in less than two years. After taking 8th at the World Indoor Track & Field Championships in Birmingham, England in March, Franklin won the Texas Relays title, leaping her way into the #2 all-time spot with a massive effort of 47'6.25" (14.48m).

It did not take long for the Franklin camp to begin working toward the ultimate target: Orji.

Pavlou said that Franklin has come a long way in her training which technique was placed at a premium. "Tori has what it takes to be the best," Pavlou indicated. Getting the American record would mean additional financial stability via a steady spot on the IAAF Diamond League Circuit. The governing body known as the United States Track and Field Association (USATF) does provide bonuses for American and World records.

The moment of truth arrived quietly Friday evening at an IAAF sanctioned meet on the island of Guadeloupe. It turned out to the be the moment of a lifetime for Franklin as she broke the American record with an outstanding leap 14.84m on her second attempt. The wind reading was legal: +0.0. Pending a drug test and IAAF certification, Franklin will be awarded the record and world-leading mark which measures out to 48-8.25.

Congratulations to Tori Franklin and her supporting camp for a dream come true.