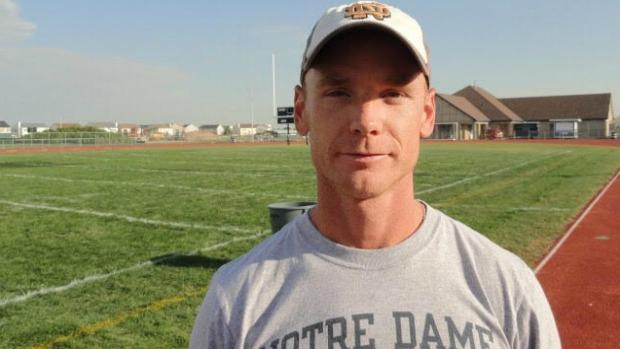 Some people have a passion, and often that passion can lead them to do things that others would not even attempt.  Plainfield South High School coach Jason Crowe is one of those people and his passion is for running and the sports of cross country and track & field. While some might be surprised to hear about many of Coach Crowe's accomplishments, anyone who knows him understands that running and challenging himself is a huge part of who he is. Coach Crowe demonstrated this passion recently when he ran 23 miles between coaching two meets in the same day.

Looking into Coach Crowe's background will give you an idea of where this dedication and commitment to excellence developed. He was part of the 1990 Joliet Catholic Academy State Championship football team in addition to running as a member of the track team. After he graduated from JCA in 1991, Coach Crowe attended North Central College where he earned a degree in Physical Education. While attending NCC he took a coaching philosophy class taught by the legendary coach Al Carrius. This course was Crowe's favorite class he took during his tenure at NCC. As Coach Crowe tells it, Carrius did not even call it a class, he referred to it instead as the Coaching Philosophy Club. He did this because he thought while no one wants to go to class, everyone wants to be part of a club and go to club meetings.

Coaching philosophy wasn't the only thing Coach Crowe took away from NCC, he also brought the tradition of championship stripes uniforms to Plainfield South High School, where he currently coaches the Boys Cross Country and Track teams in addition to teaching PE. Ever since Crowe came to the program back in 2006 every state qualifier has worn the historic stripes.

Crowe started his coaching career taking the job as an assistant football coach at JCA as part of JCA Freshman coaching staff. When asked why he wanted to be a coach, Crowe said it was because of love to teach kids and he loves sports. After graduating from NCC in 2002, Crowe moved to Fort Lauderdale, Florida and took a job as an assistant football coach at St. Thomas Aquinas and an assistant coach for freshman baseball, but he did not teach at the high school.

Legendary coach George Smith got him a job at the grade/middle school down the street. The following year, Crowe moved to Minnesota where he was again a football coach for a year. During his time in Florida and Minnesota he knew something was missing and decided to move back home and accepted a teaching job at Naperville Central High School. He also was an assistant football coach and the girls triple jump/long jump coach. 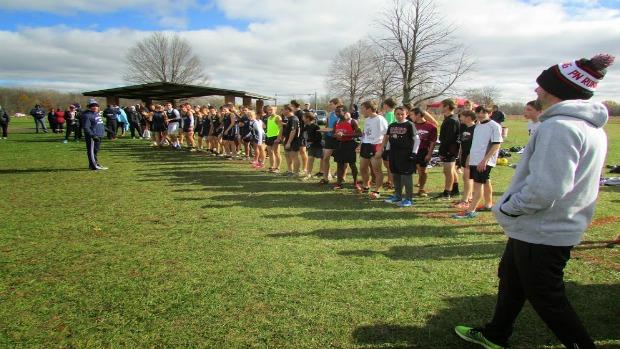 Then in fall of 2005, Crowe got a job offer that he couldn't pass up. He got the position as a PE Teacher and Head Boys Track Coach at Plainfield South High School. Plainfield South was also his first-time coaching distance runners as he was an assistant boys XC coach and distance coach for track. The following year in fall of 2006, Crowe accepted the position as the head boys XC coach at Plainfield South and has been the head coach for boys Track and boys XC ever since and inspiring young athletes has been an important part of his tenure.

A few years back Crowe took his team to the Yorkville hill for a challenging workout. Crowe could see that his athletes were struggling and decided they could use a little extra motivation. He saw a log by the side of the hill and was inspired by the movie, Vision Quest, to take the log and start doing the hill workout with it on his back. His team started rallying behind him and soon his athletes were taking turns carrying this log on their backs.

During his tenure at Plainfield South, Crowe started to investigate running ultra-marathons. He thought it would be something cool to do. He said it brings back the nervousness from races that he raced when he was in high school and like some high schoolers do the morning of races ask themselves, why do they do this? Then when he gets started and gets in his groove he remembers why he does it because it is fun. Crowe has completed three 50 milers, one 50K, and has finished an impressive four 100 mile races. Coach Crowe did fail to finish one 100 mile race, but he used that to fuel his next attempt the following year which he did complete. 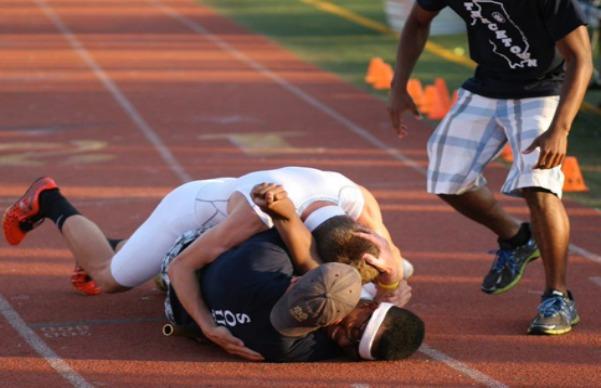 Plainfield North Head Coach Tony Holler was kind enough to share his favorite Coach Crowe moment. It was in 2014 at the sectional meet when he bear-hugged and tackled his anchor for the 4x200m Tommie Van after they qualified for state.

Plainfield North assistant coach Andy Dirks North said, "Coach Crowe is a great coach, motivator, and above all a good man who lives out his passion for running and sets an example for his team... he never misses an opportunity to encourage other runners/teams. His program at South motivates us to be the best we can be. We are chasing their excellence that Coach Crowe has established." A favorite Dirks moment happened in 2014. "Coach Crowe talked to our team after we finished 10th at sectional cross country meet. He challenged our guys to keep working hard and told them that they could be a state qualifying team next year." That 2015 team ended up being the first time Plainfield North qualified as a team for the state meet.

Conversations with fellow coaches, athletes, and mentors further reveal the character and strength of Coach Crowe, yet they represent just a few of the many people that he has impacted in a positive way. Their comments and praise reveal who he is and why he has a lasting impact on those that he has met.  Esteemed Coach Paul Vandersteen of Neuqua Valley stated: "Coach Crowe is humble, kind, and an awesome individual. He is what is right in all ways one can mention. He brings true honor to coaching."

One of Coach Crowe's former athletes- Cody Dyer- who went on to Indiana Tech to continue his athletic and academic career responded, "best coach I have had. He pushes you and wants you to achieve your very best. He will do everything in his power to do that... my group was very close together, and all had successful careers. He helped us grow, not just as athletes but men further in our college careers and post college."

Plainfield South throws coach Coach Kaz said "I have never met a coach as invested into his program as Coach Crowe... I couldn't imagine working for another head coach."

PSHS alumnus turned assistant track coach, Marcus Norment, never had Crowe as a coach but has been on his coaching staff for the last several years. Marcus said, "He's a natural leader. Through his actions and his words, he's someone you want to aspire to be. He never brags about his accomplishments instead he trains harder to improve them. He's our inspiration to become not only better as coaches but as individuals as well."

Team Captain Brendan Wengler said, "In Terre Haute, Indiana while we were just waking up the morning of NXR, we received word around 6AM that Coach Crowe had just finished running 100 miles. While we were sleeping he had been running all night. That the kind of coach that Crowe is, he practices what he preaches, and we know that as far as we run he can run farther which I think is unique from most coaches. He honestly is an inspiration to all of us."

Everyone can succeed, but Coach Crowe wants to win because he is just that competitive. As he set out on his run, you heard Crowe's athletes cheer on the man they looked up to, as he was only .1 of a mile into his run. Coach Crowe said this run did not have any low points as the course was new to him as he had never run in that area before. He mapped out his run on his phone and found some beautiful forest preserves on his run and cut through them just enjoying the scenery. He went at a very slow pace, even walked for small sections to just try and keep his heart rate down. He said it is a lot like his ultra-marathon training just trying to keep his heart rate down and stay on his feet as long as he can. He did get lost at some points of his run, but thanks to modern technology he found himself on his map and found his way back in the right direction. He finally finished his 23-mile journey and arrived at Palatine High School to watch his athlete, Christian Knowlton, run a 4:22.47 1600m and win section 1.

Following the second meet of the day he met his wife, Jane Crowe, and two young kids, Sean and Mary, at Palatine High School and headed for home, in a car this time. The next morning Crowe woke up at 5am in the morning to meet up with 3 of his former athletes turned running buddies at the I&M Canal to run another 21 miles. Crowe said his legs felt good after his 23 miler, but there was some soreness as that is just part of the game of running. He credits his health and fitness to nutrition, hydrating very well, eating a lot, proper muscle maintenance including using rollers, and getting an appropriate amount of sleep.

Since Crowe's Lake Forest to Palatine run, South competed at the Stephen P. Hunt Invitational at Plainfield Central which gave Crowe another opportunity to do what he loves. He ran from Plainfield South to Plainfield Central, which is only 6.6 miles and a comparatively short distance for Coach Crowe. The following day he ran and walked a combined 18 miles to school for a teachers' institute day and then completed the same journey in reverse on his way home. Crowe plans to do more of these runs if a meet is nearby. On your way to your next meet, take a moment and look around, and you may see Coach Crowe running by while you are stuck in traffic.