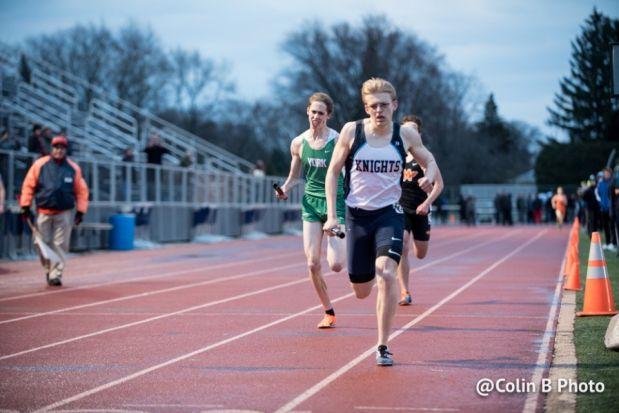 It was supposed to be a cool evening for the 50th Annual Prospect Wanner Invite. But it wasn't supposed to be the Siberian touch that reminded patrons of the near sub-zero feeling that Mother Nature threw out just a few days before May. While it was not exactly zero degrees on the Fahrenheit reading, the real feeling was less than thrilling. Meet officials did an outstanding job in accommodating the Wanner family on the Golden anniversary of the event.

The meet's main event kicked off the show shortly after pre-meet festivities. The first of two sections appeared to be on its way to a solid time, but a school severe weather detection siren forced race officials to stop the event on the second legs. The meet was halted for nearly 45 minutes as it rained and got colder. However, there was no sign of thunder, lightning, or funnel clouds in the immediate area.

The games committee met prior to the restart of events and made the determination to re-run the first section in conjunction with the fast section. Several teams from the first section decided to refrain and run their squads. Amid much cooler temperatures the race quickly turned into a three team battle between Prospect, Minooka, and York. Prospect got a slight edge on Minooka on the anchor leg with Nathan Cozine handling the chores. York was five seconds back that included a bad exchange between Charlie Kern and his teammate. The host Knights continued to hold the lead, but Kern was charging and zoning in on Minooka. On the bell it was Prospect and York who has been in this position many times before. For a moment it appeared as though the resurgent Kern was going to pull off a massive comeback. Cozine was able to hold on by the slimmest of margins and the Knights run a season best 8:06.73. Kern's solid 1:55 carry provided the Dukes to muster 8:07.21 which was exactly one second faster that Minooka for second.

The slowest Knights Wanner Invite in years was a reality-

Key athletes and coaches pulled the competition plug mentally and physically on themselves for good reason. With the post-season on the horizon and supposed warm weather over the next several days, it doesn't make sense to push the horses. The winning time in the 100 was just 11.47 by Deandre Klein of York who later anchored the 4x100 in 44.05. A strong head wind may have been the cause for such sluggish marks.

There were several silver lining performances amid the gloom and doom like Brandon Adams' solid 49.65 victory in the 400. The Minooka senior has already had a banner season with strong anchor performances in the 4x400. Thrower Jamir Gibson of Zion-Benton won the discus and shot put with 155-4 and 55-0.5 efforts. Both marks are of quality stature regardless of the conditions. Top seeded Tyrone Treadwell of Springfield won the triple jump with a season best and IL#6 45-8.