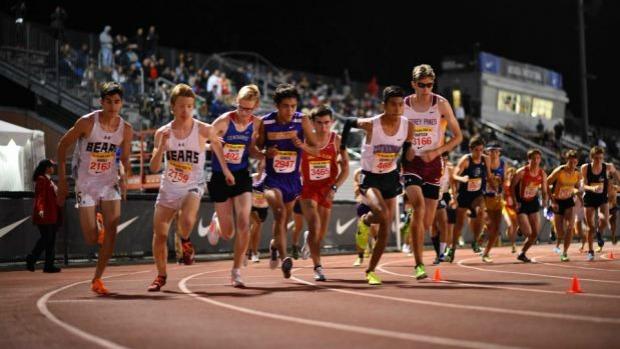 It was a complete freeze out weekend back home in Illinois as the vast majority of meets were cancelled for a second weekend in a row. Fortunately, for the true track and field nut, there was something to look forward to with a famous meet going on in southern California. The nation's biggest co-ed track and field invitational known as the Arcadia Invitational took place Friday evening as a mostly relays explosion mixed in with some high powered 3200s.

With temps in the low 60s once the sun disappeared, it was good enough to see some solid times. In the boys 3200m, Freeburg senior Charlie Parrish led the way for the Illinois trio in the rated section with a personal best IL #1 9:17.74 to take 14th overall. Parrish continues to run well and will be a threat for the 2A state title late next month. Stevenson senior Nikita Smyrnov was next to push across in 9:20.51 for 23rd place. Hinsdale Central senior Sean O'Connell clocked 9:23.77 for 35th in the massive field.

Although running 17:46.60 for the Invitational 4x1600m and placing 6th overall was not up to normal Neuqua Valley standards, the Wildcats posse of Tyler Bombacino, Dakota Getty, Ryan Kennedy, and Zach Kinne must take note in being tough. Kennedy, for example, was not feeling well and only split 4:33. Under normal conditions he can be counted in for at least 4:20. The ace Kinne warmed up for tonight's Invite 3200 thriller with a 4:15 closer.... Chicago Jones jumped into the mix and placed 9th in 18:19.73 in the seeded race. The highlight was Jeremy Brown completing a 4:27 split.