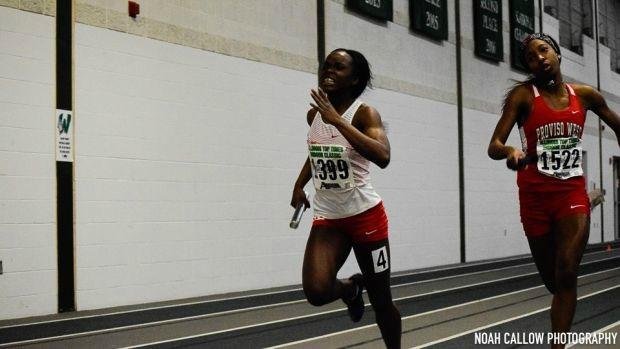 Mother Nature made the final call Saturday afternoon by packing a strong snow storm that caused some severe issues to the central Illinois area. The city of Bloomington-Normal was already covered in snow as well as ice from the previous night. Fortunately, there were some teams who traveled on Friday to attend the Class A meet. As it would turn out, nearly 20 3A teams made a wise decision to turn around and head home after a major crash occurred on 1-55 between Chicagoland and Bloomington-Normal. For those who braved the delay which lasted hours, were ready for hot track and field action inside the cozy Shirk Center.

Meet management did not move the schedule back or delay the action, but they condensed some heats and sections because of the weather.

60HH: If you took a poll prior to the race to predict the winner, Homewood-Flossmoor sophomore Kaylah McCall's name may have not have been on the ballot. Last year at this time she placed 15th in the prelim. McCall did not break 9.00 until her conference meet in mid-March. She had to face off against a strong field that included state runner up in the 100HH junior Kayla Walters of Bolingbrook. It didn't matter. McCall got out well in the final and matched Walters to the first several hurdles before pulling away for the surprisingly easy victory in 8.77. It was a breakthrough for McCall who closes the indoor season IL#2.

400: It was Dajour Miles (Jr., West Aurora) first time competing at the Top Times and she made look like easy work winning in 55.63. Ashanti Denton (So., Homewood-Flossmoor) continues to mature and develop into a solid quarter-miler. She improved from 59.62 as a freshman to second place 56.83.

800: It was a record day in this event. Glenbard West sophomore superstar Katelynne Hart was slated to compete but could not attend due to weather related issues. State leader Madison Marasco of Schaumburg fought back against a strong challenge that Evanston senior Enyaeva Michelin set. It was at the very end that Marasco seized the lead and propelled herself to a meet record and IL #1 2:11.44. Michelin hung on for second over sophomore Stephanie Kriss of Highland Park 2:11.67-2:11.83. All three placers close the indoor campaign ranked accordingly.

1600: Michelin returned over an hour later to get the middle-distance sweep. After a low 2:20s first half clocking and slight lead over Naperville North senior Hannah Ricci and Neuqua Valley senior Corinna Pena, Michelin turned up the heat in a cool building. Michelin pulled away during the third quarter-mile and eventually won in a personal best 4:54.30. Ricci continues the Huskies sub 5:00 assault running 4:58.75 and Pena also under the watershed mark at 4:59.84.

3200: Several notable absences due to weather related issues like senior Lindsey Payne of Glenbard West. But the depth of Illinois running is strong and one of the harriers from last fall was senior Melissa Manetsch of Libertyville. Manetsch held a slight lead over junior Alex Morris of Naperville North and the resurgent junior Isabelle Christiansen of Oswego. Manetsch refused to relent her control and won in 10:48.80. Morris is one of three Huskie girls under 11:00 as she took second in 10:52.21, just ahead of Christiansen 10:57.70

4x800: Top seed Downers Grove South was not in attendance (weather). Glenbard East held off Schaumburg for the win in 9:33.18

4x400: The last race of the day was the showstopper of course. Proviso West got the jump on the field with a sizable lead, and it appeared as though the Lady Panthers was going to run away with the title. The crowd volume began to increase as the anchors started their runs. HF anchor Anshanti Denton began to chop into the lead and pulled even with Panthers leg Talia Robinson on the homefront. Both ladies waged a tug of war that old school fans can appreciate. Denton's 55.7 leg was just good enough to propel her team to the win in 4:01.67. Proviso West also earned a season best and IL #3 4:01.82.

LJ: Bloom Twp. senior Hannah Morris trailed in the competition for almost the entire way until pulling out a 19-4.75 on her last attempt.

TJ: Chicago Lane Tech senior Sarah Olojo fouled three times and was sitting in 6th place until connecting on the winner 38-6.5 during the 5th round.

HJ: Newcomer Erin Oleksak of Palatine won with a 5-5 effort. This is especially good since she was only a 5-1 performer last year.

SP: Jasmine Mitchell of Thornwood and Ellie Weltha from Bloomington were the two best throwers in the classification battled. Mitchell won on her first attempt with a 44-9.5. 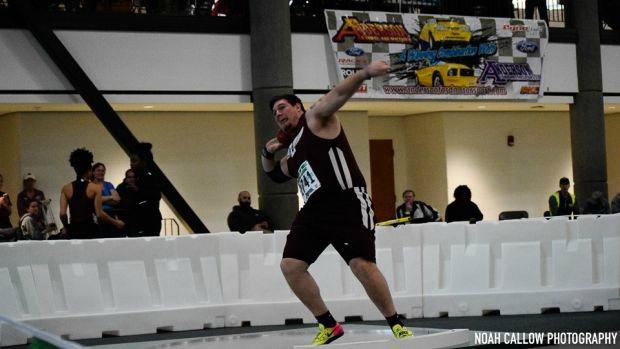 John Meyer thrilled the crowd with an all-time record

The event of the day to watch was the shot put and Lockport senior John Meyer. The recent stardom of Meyer has taken shape after his record 70-4.5. The fans could not get enough of him and he provided a quick show, Meyer only got in two legitimate efforts and the first one set the meet record 64-11.75 and the second was an all-time meet record 68-0.

Bloomington senior Zach Bradford appear to have the same energy that Meyer had in the shot put. He got in and got out with an all-time record. The all time great pole vaulter started at 16-7 when the field was complete. Bradford made the height on his first attempt. He took several more attempts and set the record with a 17-6.25 clearance.

Geremiah Lawson of Plainfield Central won his first LJ title at 22-6; Peyton Frankenreider of Yorkville won the TJ with 45-7.5.... Frank Massey of Bloom took the HJ crown with a 6-6 effort.

Speed talk had something to say-

The one and only "Baby Holyfield" Marcellus Moore was missed his 60m prelim due to weather related issues. The sophomore sensation from Plainfield North would have loved to tangle with Declan Rustay of Hoffman Estates. Rustay had been laying in the weeds for most of the indoor season. However, Rustay is starting to run well and he produced the fastest time in the prelims at 6.99. The final was a close one but Rustay held off Dubem Anikamadu of Huntley for the title 6.93-6.95... Moore ran a strong leg on his team's 4x200 that won in 1:31.57. Then later the 200m in a good time of 21.66.

Brandon Adams (Sr., Minooka) has become two different runners when he runs two circuits. As a 400m dasher, Adams is good and can handle his state mates. He did so by winning in 49.80. It was good enough to hold on for the victory over Jason Thormo of Grant who ran 50.12... as a relay runner Adams is a specialist. He went to work once again as a "vacuum" sucking up the deficit in front of him in the 4x400. There was no panic as Adams went from 3rd place through the first circuit and a half before getting into position to strike like a viper snake. Adams grabbed the lead from Crete-Monee and Grant and brought home the win in 3:26.81. Adam's 48.9 anchor was proof of the great effort.

Distance running was lean and light-

It was an opportunity for some emerging names to step up on the new platform and strut their stuff. The 3200m was the first to get it on. Conor Perreault of Niles North kept the field at bay for most of the race. CSL foe Tommy Brady of Maine South made a charge late in the race but could not quite reel in Perreault. The winning time 9:15.07 was good enough for a season best.

Phillip Hall of Danville was trapped and boxed for a portion of the 800m. The opening first half was not overbearing which allowed Hall to recover and finally jet into the lead late for the win in 1:56.76.

The 1600m was a war that Andrew O'keefe won against Sam Rivera of Whitney Young. The junior from Granite City opened up on the third quarter against Rivera and strolled home comfortably in 4:19.26.