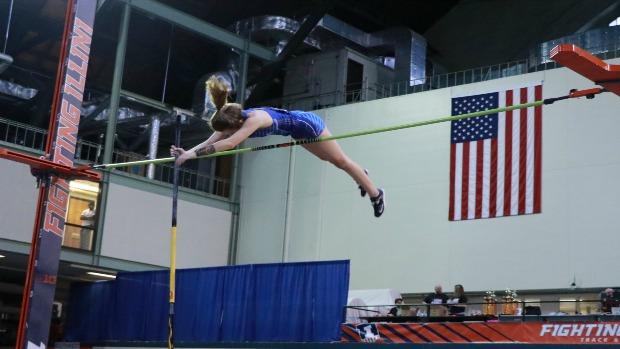 Track & Field can be a great sport with its display of dazzling individual and team elevated performances. It can also be unkind due to human and artificial intelligence discrepancy. On a lengthy Saturday inside the cozy University of Illinois Armory fieldhouse, there was a mix of both. Typically it is the 16-lap 3200m that can confuse coaches, athletes, and officials with keeping track of proper lap counting. Surprisingly, though, was the girls and boys races that proceeded and finished without any glitches. However, problems began to arise when the 4x800m relay teams hit the track. This is where things got weird. The "two-mile" relay is the same distance as the open but broken up into four laps per runner using a baton. During one of the boys races officials marshalled runners one lap short on the second leg which caused mass confusion. That meant some athletes ran shorter while others ran longer. The end result was several teams getting disqualified, and with it a bevy of very disappointed fans, coaches and athletes.

In the midst of non-stop quality performances was several glitches with the timing system which caused delays. We all know these things happen sometimes, it is just frustrating to see the slowdown of fluidity within the confines of battle. Still, there was nothing that could derail the tremendous efforts of personal bests, season bests, and a few meet records that ran rampant on the penultimate weekend of indoor track and field in Illinois. This final weekend served as one of the last qualifiers to next week's Illinois Top Times.

Pole Vault is one of those events that takes you on a journey. Let's take Stephanie Jacobs of Freeburg for example. She was among the leaders in the state coming in but there was more to do. Jacobs missed out of all-state honors last year by a place. Things became interesting when the bar was raised to 11-9 and she was the only vaulter remaining. She cleared it and moved up to 12-0. After two misses it was a tense situation for the Jacobs camp. With one last attempt at the height she cleared it. The bar was moved to 12-3 where she bowed out.

Enyaeva Michelin of Evanston had another stellar day of competition breaking the competition: 800 and 1600 respectively. The first was from the gun in 2:14.39. Several hours later it was easy work again vs. 2A xc champion Jenna Schwartz of Waterloo. Enyaeva burned the track in 4:59.54.

Hannah Morris of Bloom returned in top form jumping her best in several years following surgery. She darted out with a prelim 19-3 and later a massive 19-10 in the final signaling she is the one to beat.

The workhorse Ameia Wilson was at it again dominating the track and field. After a second place in the long jump, the Danville junior turned her attention to the track where the anticipated battle with Tina Martin of Decatur Eisenhower was a dude. Wilson took control of the 60m in 7.56 for new state lead. Martin fell to an injury. Wilson later blazed the field in the 200. It was just a typical work day for Wilson. 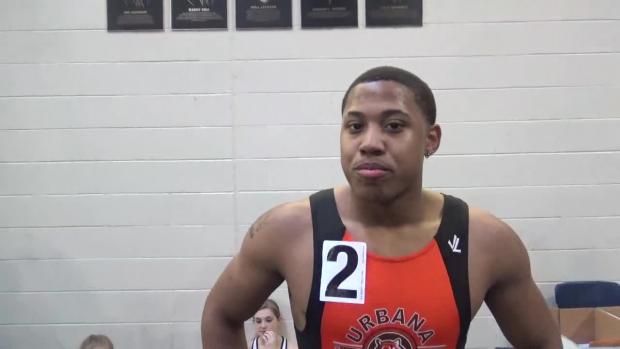 Last year at this time Christian Phillips had a tough time maintaining his poise and composure during competition. He would often scream at himself or challenge his opponents indirectly- or directly. He would be described by some as a "loose cannon." But what a difference a year makes. The chiseled body sophomore from Urbana still wears his emotions on his sleeve, but he projects the energy to the crowd and on his teammates. Track and Field is a sport, especially the sprint aspect that thrives off of emotion and energy. Phillips is that guy who clocked a then personal best 7.14 in his prelim. He immediately ran along the track to let the world know how he felt. After winning the final with another PB 7.07, it was like a fireworks show. This is good for track and his teammates fed off of the energy with an exciting 4x200 win over Chicago Morgan Park 1:33.36-1:33.48. The rest of the state will enjoy Christian Phillips and the Urbana Tigers at #ITT18.

Danville senior Phillip Hall was negated an opportunity to show the crowd his exploits in the 4x8. He later returned with a sensational performance in the 400, winning in a PB 50.83. The speedplay is all a setup for the 800 later outdoors in his quest to win his first state championship.

Granite City junior Andrew O'keefe traveled from the deep southern part of the state to showcase his talent in the 1600. The fierce outcome was a victory over Wyatt McIntyre of Athens and Jack McNabola of Chicago F.W. Parker. O'keefe dueled to the very end against McIntyre who previously ran the 800 and McNabola who won the 3200 during the morning session. O'keefe ran an indoor personal 4:22.94.