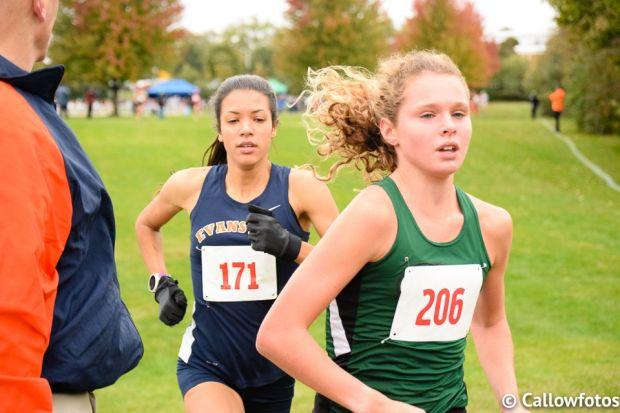 -Everyone knew that defending state champion and undefeated Katelynne Hart was the heavy favorite. But somehow we all wanted to believe an upset or at least a competitive rematch with Enyaeva Michelin (Sr., Evanston) would be in the works. From the gun and past the first 400 meters it was a two girl race. Hart accepted the challenge from Michelin, who has been lights out since her only loss to Hart in mid-September. The first mile went through in a brisk 5:19. "I kind of went out a tiny bit conservative," Hart quickly snapped back. Well, the pace was "brisk" for Michelin whose confort zone is usually around 5:30-35.

Hart was just like a heavy weight fighter in the ring winning round after round on points. But like a smart boxer she waited paitiently for her opportunity for the knockout. It occurred just after the second mile in 10:55. Michelin was holding on to the ropes in 11:01. But she was clearly in TKO territory and in big trouble. Hart took off and her teammate Lindsey Payne began to see a hurt Michelin. Payne tried to reel in Michelin during the last mile, but was not able to. Hart cruised home in 16:27 but the fight was a bit closer than the final outcome indicated. Michelin got home ahead of Payne by three seconds 16:54-16:57. The last individual spot went to Caroline Young (Sr., Chicago Taft) who ran a personal best 18:26.