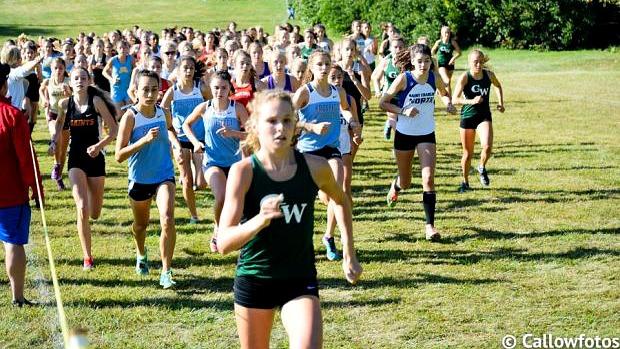 Katelynne Hart dropped another mad dash bomb from the cockpit

The annual Lake Park Lancer Invite (honorary Harvey Braus Invite) almost got off to an ominous start prior to the first race when meet officials asked head coaches to report for an emergency meeting. The computerized scoring system suddenly went down and the backup plan would be for coaches to time their own runners. The honor system was a staple back when coaches assisted with meet management on the timing side. The 20 minute delay did not impact the outcomes of the morning's long set of races, and certainly not the marque boys and girls matchups.

Several fans was overheard putting up a friendly wager on sophomore sensation Katelynne Hart (Glenbard West). The prediction was time oriented. One fan uttered, "I bet you she runs 16:20." Well, Hart did not need much resistance in making that prediction come true. The opening surge to the narrow exterior of the course quickly spread out the field. And just like that she was gone. Hart hit the first mile in approximately 5:14 and never looked back. The final result was a meet record 16:08 and well over a minute ahead of teammate Lindsey Payne.

The Hilltoppers continue run well with its top three following in a trio format. The final was a dominating win scoring 45 points. The Hilltoppers may have the top trio in the state and that should keep them in the top 5 talk all season. They do have some issues at the #5 spot when matched up against great squads of like ability. Hopefully, Payne can get herself turned around and be that dominant co-pilot like she was last year. York proved that they can compete as a pack as the 57 second scoring split showed. Junior Sarah May placed 8th but she is capable of running much faster. 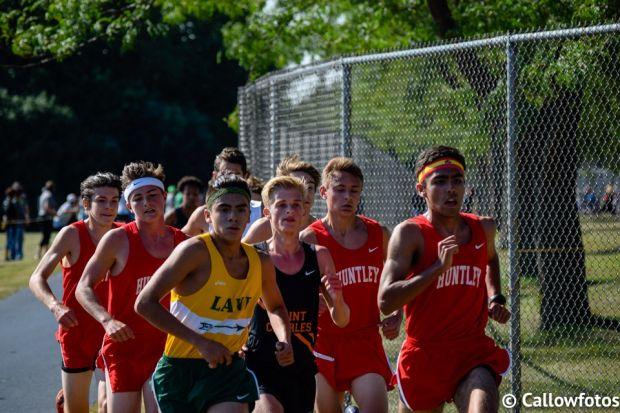 The lead pack contained Huntley for most of the race

The individual race was an absolutely solid affair with about a dozen runners packed together for the first mile and change. Huntley had their top five led by Jadon Conroy upfront in bright red. Jones College prep had four runners mixed in and Lane Tech's Julian Higueros and St. Charles East's Cole Adesso as the odd balls. The group hit the first checkpoint in 4:56 and would break apart about a quarter-mile later. Conroy, Higueros, Adesso, and several Red Raiders were in the mix at 2m (10:13).

The Lake Park layout is similar to Niles West's in that it is flat and ends in the stadium on the track. As the race entered the final 300m on the track, it was Conroy leading the way with a strong kick and seemingly on his way to victory. Higueros was in second but had a few chasers on his tail. Conroy hit the finish line in 15:02, 11 seconds ahead of Higueros. Since there was an issue with the timing at press reporting time, meet management was only able to record the top 30 runners with teams. Places were secured.