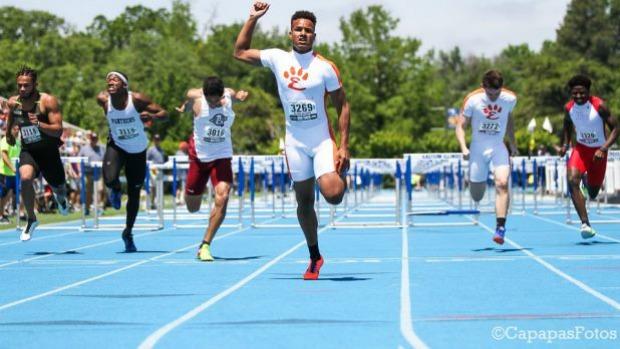 The track and field experts perfectly picked the team trophy winners according to the final Power Team Rankings by MileSplit Illinois. Edwardsville, E. St. Louis, and Bloomington were the would be paper champions.

But au contraire mon frère.
It was not as easy as it seemed. Edwardsville lost their 4x200 relay to a collision in the prelims, super talented senior AJ Epenesa did not qualify in the shot put, and there was no 4x400 relay as a trump card. E. St. Louis lost top hurdler Delano Anderson who literally stumbled twice in the 300H and was ultimately disqualified. Bloomington qualified some major firepower in the relays and individually on the strength of senior Cary Lockhart. However, he pulled up lame after bringing home the 4x2 relay home. Lockhart did not compete in the 200. The Purple Raiders fought their way to a third place medal with 32 points. ESL scored 39 on the strength of a close out 4x4 in a state leading and fast 3:14.76. The Flyers had to hold on against Bloom who ran well in 3:15.98. A total of six schools broke 3:20 signing another great relay year.
The end story of the day was Edwardsville putting all together with their super seniors. Epenesa won the discus on his final high school toss and perhaps the best one for the record holder from 2016. Epenesa said watching recent tape of his record throws from a year ago clicked just in time. He overtook the leader John Meyer (Jr., Lockport) with a 197-11.
Travis Anderson most impressive win was his secondary event the 300H. The University of Nebraska bound Anderson lead all the way in taking the gold medal in 37.83. It was the speed endurance which somehow made him a dual threat.
The final attack of the day for the Tigers was Devonte Tincher finishing 5th in the 200. All he needed for his team to earn first place was 7th. After Rustay put away the field in 21.57 (-0.5) Tincher chugged home in 21.97 and securing the team title and the Tigers copped 42 points.
===================================================================================
LJ: When the sectional and state leader Demetri Lomnick (Sr., Buffalo Grove) did not make the final, it opened the door for others to take advantage of the opportunity. Davion Cross (Sr., West Aurora) and Cameron Ruiz (Sr., Lakes) were the two titans here who could do that. Ruiz was the defending champion and Cross the challenger. There were two others over 23 feet with Tony Rolfe (Sr., Chatham-Glenwood) and Camron Harrell (Sr., Bradley-Bourbonnais). The marks carry over and since Cross (23-11.25), Ruiz (23-7.5), Rolfe (23-1.25), and Harrell (23-0.25) all maintained their Friday prelim marks that did not improve. 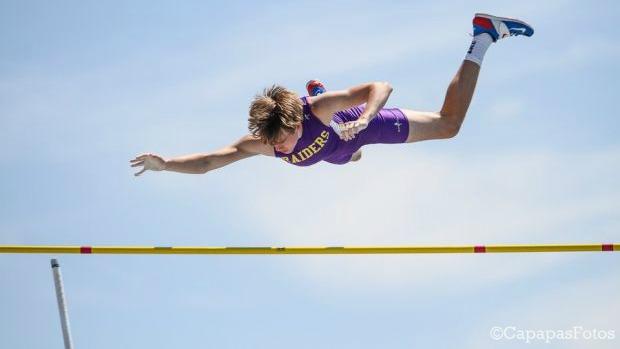 PV: A solid field coming in had an opportunity to produce some major firepower. But the only one who did was Bloomington junior Zach Bradford. Bradford came in on a mission to break the all-time record established by Luke Winder, formerly of Plainfield Central several years ago.
HJ:  Camron Donatlan (Jr., West Aurora) won his second straight crown with a 7-0 clearance. Though it was a tough year with a knee injury that require some serious rehab, Donatlan was able to be a national player with his US#10 effort. He attempted a meet record 7-3 which he almost cleared.
SP: John Meyer was not happy in his quest for 70 feet but winning another title has to be fulfilling. His prelim 65-10.5 had to stay. Ethan Hanson (Sr., Fremd) was second in 62-7.25.
TJ: Perhaps the event of the day to watch was here. Camron Ruiz and DaVion Cross met up again and would battle all the way to the end. Cross was jumping well but his take offs were severely behind the board. He led with a 49-0 with two attempts left. Ruiz needed a big placement in order to secure his title defense. He got down the run way fast and then... nailed it!!! The all-time meet record 51-1 (1.4) was his and the happy Ruiz family would leave going home smiling. 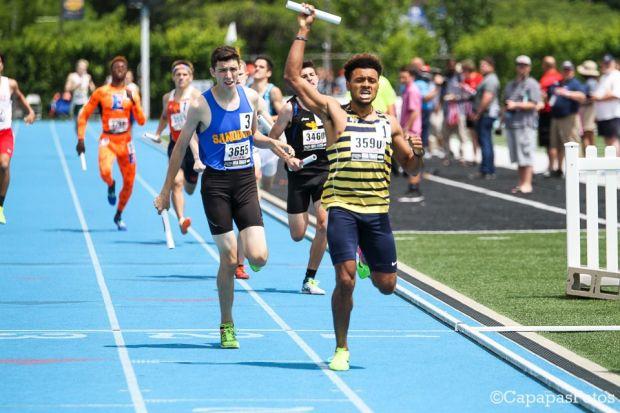 Isaiah Robinson would end his career as he started it as a sophomore... winning the 4x8 relay
4x800 relay: It was an unsettling feeling coming into the state championship with only two teams under 7:50 and just 21 that hit the state qualifying standard. Illinois is the king of the 4x8 relay in the country just as Texas is with sprint relays or California as a whole for track and field. The three prelim heats did not overly excite the palate as heat 1 winner Palatine Fremd ran just 7:51.48. It was slower in the next heat for Sandburg who clocked 7:53.33. The final heat saw sectional leader Neuqua Valley finally dip under the watermark with a 7:48.20. How would the final play out?  The lead off legs went out fast but honest courtesy of E. St. Louis Sr- 1:55.56 saw a stream of teams follow suit. Neuqua Valley got the lead for senior Isaiah Robinson who basically strolled the track twice checking his disposition before bringing home with a 1:55.xx split and 7:45.51. Sandburg with junior Dylan Jacobs made it respectable in the runner up spot 7:45.75. There were eight teams that cleared 7:50 and 11 of 12 finalists ran 7:55.00 or better. If prelim leader Lake Zurich did not get impeded they would have challenged for the win. Senior Kyle Griffith was tripped during the exchange by an incoming runner. The conflict was upheld.
4x100 relay: Homewood-Flossmoor came into Charleston with the best time in the state and less than a smidge behind prelim leader Bloomington. But after Cary Lockhart went down for the Purple Raiders the resistance was severely lessened. The Vikings ran away from the field on the third leg to win in 41.79. The jubliant junior Marcell Ellis carried his momentum passed the photographer's camera well. He was beyond excited and perhaps happy that he and mates will return fully loaded in 2018. Yorkville surprised many of the doubters and those who overlooked them to place second 41.97.
3200: Irwin Loud (Sr., Oak Park-River Forest) threatened to upset the balance of the race here. He was placed into the "slow section" by virtue of his sectional performance. Loud is one of the top distance runners in Illinois who already ran 9:03 indoors. Plus, Loud is a front runner and does not mind being a lone wolf. As expected he went out in a too fast 62 seconds for the first 400. He had slowed down from the torrid average by the time he reached the first 1600 in 4:26. The pace was still on sub 9:00 and with the weather still reasonably comfortable at 11:30am, it was only right to put pressure on the championship section which was slated to go after 1pm... apparently a group of someone's did not get the memo that Loud ran 9:14.22. It was already 80F plus humidity when the gun went off. It was 66 seconds for the opening lap and later 4:34 at the first mile- still more than 8 seconds off of Loud's pace. Minooka senior Soren Knudsen finally had enough and took over with 600 to go. He opened a little daylight on senior Jack Aho of Grayslake Central. No one caught Knudsen who completed one leg of his triple crown in 9:03.41. Only five runners were able to beat Loud's mark who ended his long career with a smile.
110HH: Travis Anderson easily defended his title in 13.79 [+0.7]. In a down year overall for 3A hurdles, the pack ran reasonably well including runner up Landon Keefover (Sr., Antioch) 14.34. 7 of the 9 finalists were
100: Declan Rustay (Jr., Hoffman Estates) came into the state meet as calm as any sprinter could. All of the pressure was on others. Cary Lockhart decided to run but was not 100%. The pre-meet favorite was freshman Marcellus Moore of Plainfield North. There was some thought creeping in after he had not improved on his block starts and reaction time. As it were the competition began to improve and close in on him. Rustay was one of them. He ran a lifetime best 10.40 in the prelim and ahead of Moore's 10.41. The final was all but over as Rustay dashed to an easy victory in 10.54 (+1.1). Moore placed 2nd in 10.65. Another freshman AJ Henning was third in 10.75. Five finalists will return next year almost guaranteeing another solid final.
Check out the exclusive Chris Conrad interview here
800: Antonio Davis (Sr., Bloom Twp.) set the fast opening 200 before Chris Conrad (Sr., O'Fallon) would take over just after 300 into race. He passed the 400 in 54.1 and seemed to be on a mission by opening up more daylight agains Davis and the field. On the homestretch, it was Conrad all alone and appearing to lock in on a serious time. The final verdict was 1:49.91- blowing away the previous state lead as well as the field. Brian Kuehl (Sr., Geneva) was second in 1:53.88. Conrad just missed the IHSA state meet record 1:49.71. However, he got revenge for the inexperience and big eye opening racing from a year ago.
4x200 relay: It was a close race for all three legs and E. St. Louis appeared ready to take 10 points they desperately needed for the team title. Batavia would edge them and stay just ahead of Hoffman Estates running 1:27.01 (IL#3). Hoffman Estates 1:27.06 and ESL 1:27.08 copped the tight third spot.
400: No one broke 48 seconds this year but Luis Cossio (Jr., Barrington) ran like a tactician first and for time second in winning with a time of 48.33. Look for things to improve in 2018 as many returners come back including runner up Deonte Anderson (Sr., E. St. Louis Sr.).