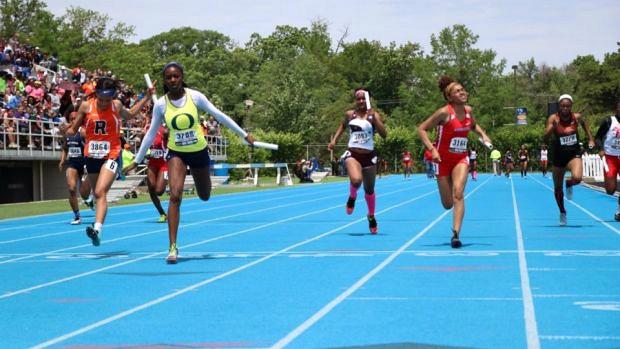 LJ: It was unfortunate that this event had be run undercover because of early bad weather. The state's top jumper Jaimie Robinson faced some resistance from Hannah Morris (Jr., Bloom Twp.), but it was for not as the 19-11 was too strong. Morris and Alison Woerner (Sr., Chatham-Glenwood) 19-3.5 were the only others over 19-feet.

PV: Ali Munson (Sr., Lisle Benet Academy) became the first girl to win two titles in different classifications. Last year Munson was the 2A champion and missed out on an opportunity to battle the state's top overall vaulter Aliyah Welter (Jr., Monticello). Regardless, it was an another state title for Munson who cleared 12-3.

HJ: The excitement of another six-foot clearance for Jelena Rowe (Sr., Bloom Twp.) never gets old. Ms. "6.0" easily put away runner Kamesha Smith (Sr., Thornwood) when she cleared 5-10. The sped up meet seemed to take away from Rowe's accomplishment. The crowd apparently was not aware of the event until it reached the 6-0 mark. Nevertheless, Rowe clear the record breaking height and went for 6-1 which she had three solid attempts.

TJ: Robinson was not slated to jump on Saturday because of the stress of carrying the team championship points. However, things would change whether some would believe it or not after 2A star Imani Carothers (Jr., Chicago Brooks) leaped an IHSA all-time all conditions record 42-10 (+2.9). Robinson responded with a charge hitting the board in 42-8.50. She appeared to fall back slightly in the landing fit which may have costed her the all time record. But the wind reading popped up: +2.0. It would be the new official IHSA record legally. Lota Onua (Sr., Plainfield East) stepped her game up big time and took second place with a leap of 39-1.75.

DT: Jazzmine Poole (Sr., E. St. Louis Sr.) did her part in helping her team win another state title. Poole held off Courtney Morgan with a toss of 140-11. Morgan was close though. She hit on 140-7 season best and IL#8. 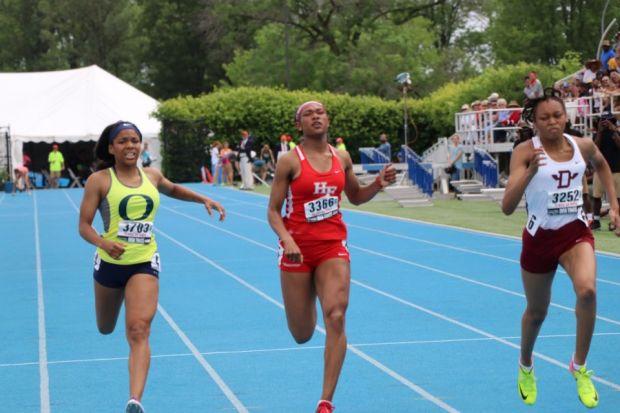 4x800: The sectional leader Belvidere North still needed to prove themselves to Chicagoland teams which has dominated this event over the years. Glenbard West and Hinsdale Central were the teams to watch for several reasons. The Hilltoppers announced they were going run Katelynne Hart on it and the Red Devilettes are the defending champions. New Trier got the drop early but could not maintain focus among the tight pack. It was finally the Blue Thunder of Belvidere North taking charge on the third leg exploits by Madison Dierks (Fr.). She was able to maintain a sizable lead for the best anchor in the field senior Jenna Lutzow. The 2A cross country champion and former 800 state runner up maintained focus and whipped around the track with a 2:15.4 split. The overall time 9:12.12 replaced the old state leader Glenbard West which finished 4th on Hart's 2:13 split. Hinsdale Central placed second ahead of Naperville North who raced without senior Claire Hamilton.

4x100: Sprint relay finals always find a way to be close and good on this level. Even when Lincoln-Way East had great quartets they seemed to draw the best of teams. The same would be expected of state and sectional leader O'Fallon. The Panthers got off to a shaky start with several suspect hand offs that allowed Kenwood and others to stay on course for an upset. Romeoville was that team on the verge of pulling the upset, got the stick to anchor Kaniyah Rush first. It did not take before Mya Watson-Blake to bolt to the lead and zip through the finish line with the winner in 47.59. The time was a little slow by 3A standards but the wind had a lot to with it, Romeoville (47.67) and Kenwood (47.88) rounded out the top three.

3200: Hart knew she was going to be tired and she knew the sharks in the water would be chasing her down late. So why not go and set a blistering pace and make the chasers come and get you? The first mile was 5:07 and plenty of slack to work with. Teammate Lindsey Payne began her move against the pact she was in. Payne left the nest amid humid and windy temperatures to score a second place behind her yearling Hart: winning time was 10:32.33 and runner up 10:37.55. Once again a great cross country season reared the depth from top to bottom. 9th place was Emily Henkel (So., Lyons Twp.) in 10:52.96. Among the many surprises in the field was Caitlin Bruzzini of Crystal Lake South. Bruzzini won the first section better known as the "slow section" in 10:49.96. The mark would hold up for the determined senior who raced to 8th place and earned her first ever state medal.

100: The "crap shoot" event is right here unless you are ranked #1 in the country. In other words it's anyone's race to win. The defending champion Amira Young (Jr., Chicago Whitney Young) had been mum all year letting others talk and make predictions. Young got a good start that seemed to put the entire field including Jaimie Robinson

800: No Jenna Lutzow means that a newly minted runner is going to win the state title. Emily Stegmeier (Sr., Elk Grove) fits the bill as an emerging star all season and after producing the fastest time of the prelims. She was battle tested as well going through the tough MSL fortress. The pace did not go out as fast as in previous years not did it pick until near the last 150. Stegmeier and Emma Moravec (Sr., Downers Grove South) separated themselves from the nest and motored home. Moravec tied up with 50m to go and Stegmeier held on for the win in 2:14.72. Moravec was a second ahead of Margot Dooley (Sr., Wilmette Loyola Academy) 2:15.08-2:16.03.

4x200: The #1 squad in Illinois is no doubt O'Fallon and they made that a fact with a blistering 1:38.59 good for IL #1 again. This is a senior dominant team that made a promise that they would all come back and win in 2017 after finishing second. They did it against some rough conditions and in one of the fastest times in state history. Romeoville fought tough but settled for IL#2 1:39.42.

400: We all knew this was going to a good one but just not how good. Dajour Miles (So., West Aurora) had skipped the 100 and 4x1 because of a sore hip. Kylie Welch (Sr., Bloomington) was the defending state champ and ready to hold her turf. Miles struck first with blistering 100 and then 200 while Welch laid back and bid her moment to attack. With 150 to go, Welch began to move but she could not reel in Cinnamon and had to settle for second against 54.75. Welch clocked a respectable 55.50. The field included 7 returners for 2017- 5 of which are sophomores.

1600: KK Hart all day in her third and final race as well as fifth high energy one in less than 18 hours. It was not even close as Hart bolted out to a big lead and coasted to a victory in 4:51.54. Mackenzie Callahan (Sr., Minooka) closed out her career with a nice runner up spot in 4:54.22. A total of five girls broke 5:00 in less than idea conditions.

300H: It was mentioned earlier that state leader and top seed for the final Rokelle Stanley had to emergency bow out because of injury. The second one in charge was Haile Bieber (Sr., Naperville North). Bieber took full advantage of the situation

200: Jaimie Robinson put the finishing touches on her IHSA career with a victory in an event that presented the most challenge to her. Robinson easily beat upstart Ameia Wilson (So., Danville) 24.82-25.14 [-3.1 wind]. The defending champion Amira Young settled for the bronze medal.  "The Jaimie" was not quite complete because of the 100 loss, but there is no doubt she has a place on "Lady Mt. Rushmore."

4x400: Lincoln-Way East earned a consolation prize after not winning a state trophy in almost a half decade. And with E. St. Louis Sr. having to retool the line up after their top leg bowing out, the Griffins went to work right away and never faced a challenge after the second leg. Taylor Wright (So.) anchored the door slammer in 3:51.62.