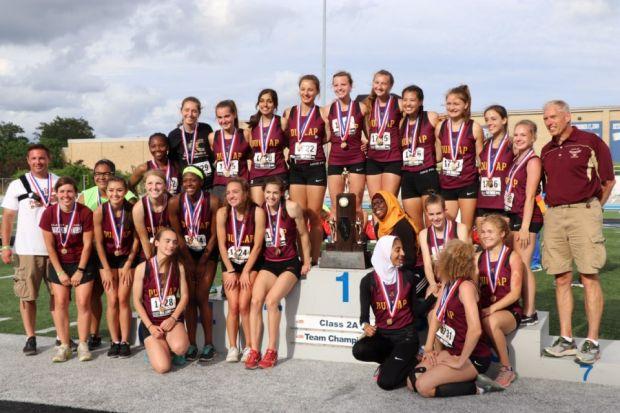 What a difference a year makes. It was at that time Dunlap was sitting in a great spot entering the state finals with a boat load of sure handed qualifiers. But unfortunately the young Eagles could not keep up with the seasoned veteran Cahokia, Kaneland, and Springfield Southeast squads. The end result was a fourth place finish 34 points. Experience means everything in sports and this year this fun group had gained that and more. They beaten up the competition where ever they competed regardless of size and strength. After a sectional thumping that propelled the Eagles into Charleston for state championship, it was just a matter of time before the fun and hungry bunch would be hoisting a Gold trophy.

The Eagles mustered 78 points to the 3-time defending state champs Cahokia who tallied 57 points. Springfield Southeast once again found themselves on the podium by scoring 40.

Dunlap used a collective effort rarely seen on the girls level when they had a finalist in every event except the high jump and shot put. They scored victories in all four relays, becoming the first team to win all four relays and establishing the #1 rankings in those relays. The leadoff 4x8 saw a come from behind effort against defending champion Washington. Anchor Sarah Georgieff (Jr.) doubles as a long hurdler, ran her leg flawless in holding off the masterful Hailey Tranchitella (Sr.) on the final straight 9:31.91-9:33.76.... the 4x1 pitted the Eagles vs. all challengers. Kiara Pauli (So.) returned with a new do' and better running form as well as experience. Pauli got the stick on anchor even with the field but her great talent nullified any chance of an upset as the Eagles blazed in 47.74 voer Springfield Southeast.... the 4x2 was a tough race as the wind was whipping hard on the homestretch. It did not matter though. Dunlap ran well behind Pauli's finishing exploits in 1:41.50... lastly, the #showstopper ended with the final nail in the coffin with Georgieff closing it all out in 3:55.99. 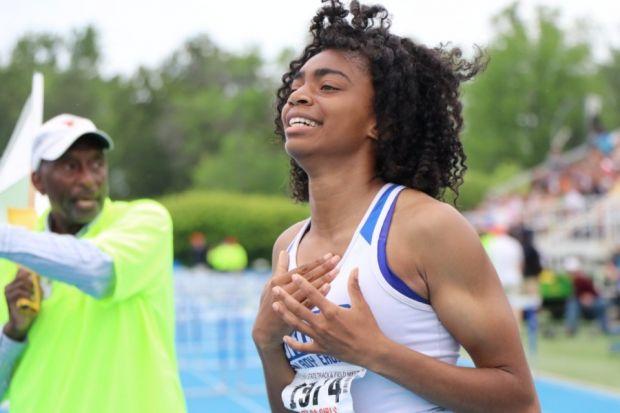 3200: The classification leader Grace McLaughlin (Jr., Rockford Boylan Catholic) did nothing to prevent herself from losing that paper title. McLaughlin got out fast and continued to pull away from the field each lap past the 1200.  The final tally was 10:40.45. Franny Verville (Jr., Dunlap) was almost 30 seconds back but picked up nine big team points with a second place finish.

100HH: Imani Carothers (Jr., Chicago Brooks) moved to US #15 and IL#1/IL#2 all time legal. It was over before it got started for Carothers who came in as the state leader. Carothers zipped over the hurdles ahead of the field like she was on the rampage and busting through the tape in 13.72 [+1.8]. Jordyn Bunning (Jr., Vernon Hills) was a distant second place in 14.62.

100: The newcomer Katina Martin (Jr., Decatur Eisenhower) finally decided that the state final which contained Mariya Hudson (Sr., Cahokia) among others, was the right place to burn the field. Martin burned the field in 11.52 [2.6]. Hudson was considerably back in 11.79. The changing of the guard in with Pauli third and 7 of 9 girls are back for 2018.

800: It was a year ago that all eyes were on Karina Liz's attempt at bringing home another title for Aurora (Central Catholic). It did not happen as Rachel Hickey (Jr., Lasalle-Peru) stole the show with a great effort. Abby Fioresi (Sr.) stood in the background not able to assist her teammate Liz... until this season. Fioresi has been as strong as ever this season. After breezing in the prelim, Fioresi took it to the field and Hickey fought hard to retain her title. Gillian Fiene (Fr., Illiana Christian) fought as well before bowing and accepting third place. Fioresi's strength into a strong head wind was the difference in holding off Hickey 2:12.37-2:13.49.

400: Tina Martin (Jr., Decatur Eisenhower) is the other half of the Martin duo and their job is to double team and destroy the competition. It seemed as though the race got under way that Tina was going to finish of Hudson like Katina did in the 100. Tina and defending champion Elizabeth Drab (Sr., Arlington Heights St. Viator) rocketed well ahead of the field through 200. Hudson finally got herself into the picture and on the homestraight she got even with Tina with 20m left. Hudson leaned at the finish for the exhausting win 54.48-54.51. The times would go IL#1 and #2.

300H: It was just last summer that Karyn Best (Jr., Wheaton Academy) got to work on becoming a better track and field athlete. She worked tirelessly on her speed and then hurdles on a hot sunny day. It certainly did not appear as though she would be any where close to becoming a champion. Well hard work and talent paid off. Best has been one of the best hurdlers all season and she saved her best for the final. The start was a good one and she held on for a convincing win against the 100HH runner up Bunning in a personal best 43.49.

1600: The favorites made true here. McLaughlin and Delaney Appino (Sr., Rockford Boylan) are great friends and teammates who ran the fastest prelim times from a day before. They both went out in a fairly conservative pace before picking things up and pulling away from Verville in the second half. The pair ran 5:02.43 and 5:03.63 respectively.

200: Katina Martin returned to finish off what her sister Tina did not do in the 400, finish off Mariya Hudson. Katina completed the family duty in fine fashion in smashing home in a personal best 24.20 [-3.3]. The wind was incredibly fierce otherwise we would have seen a time in the 23's. Hudson was a distant second in 24.69. 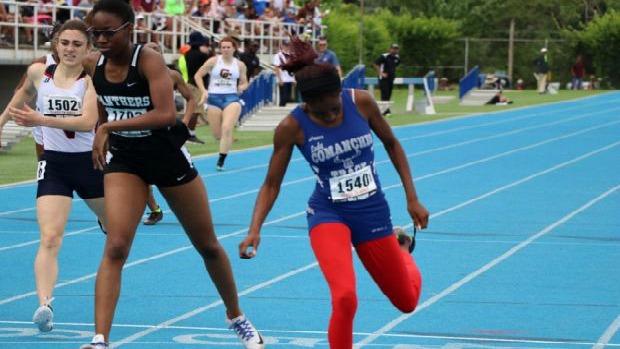 LJ: The lurking and little known Erika Furbeck (Jr., Geneseo) was well aware of Carothers exploits in her favorite event. Furbeck was leading by a small margin from Friday's prelim before she went to work to increase her short lead. Carothers could not improve on her 19-3.25. Furbeck dropped 19-5 on her final attempt in winning her first state title.

PV: It was unfortunate that last year's state champion Ali Munson (Sr., Benet Academy) moved up to 3A and missed on an opportunity to defend her title against the state leader Aliyah Welter (Jr., Monticello). Welter leads the state with a fine 13-1. She cleared 12-9 in holding off Josie Held (Jr., Mt. Zion) 12-6.

HJ: The former junior high school phenom now freshman Diamonasia Taylor of Urbana won the Illinois Top Times and now was the favorite outdoors. It was a piece of cake for Taylor who cleared 5-8, just a touch off from her personal best 5-9.

SP: Latavia Maines (Sr., Centralia) completed a great season and exceptional final three seasons with two titles and a runner up. She opened up more eyes to her outside of KD Young (Warrensburg) who grabbed al of the throwing headlines. Maines threw 47-7 to beat area foe A'veun Moore (Sr., Mt. Vernon) whose 46-7.75 is a personal best.

TJ: So much for the triple jump not being her "baby." The long jump is. But Carothers set the Illinois all-time all-conditions record here with a sick leap of faith 42-10 on her last attempt. The marvelous attempt was delayed at first because of wind conditions were moving past the allowable all morning. The defending champion decided to make it go and hit finally phase perfectly: PRESTO!!! Unfortunately the wind reading was +2.9 and not allowed for official record purposes. Jayla Campbell of Olympia Fields Rich Central may be a future state champion. The rising sophomore enjoyed a great performance finishing second with a 39-1 [2.2]. The event overall looks extremely bright as four of 12 finalists are freshmen or sophomores.