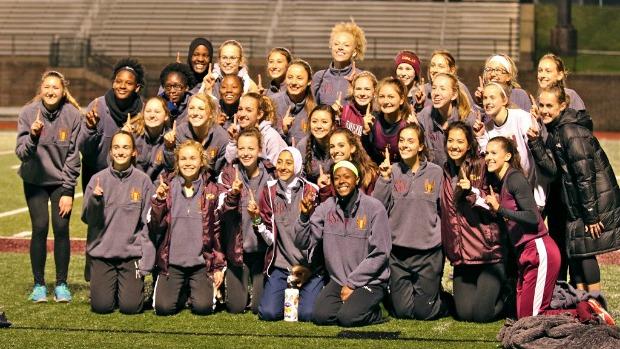 Let's get right to it... the theme of this classification is going to the multi-defending champion Cahokia vs. the up and coming party spoilers Dunlap. The Comanches actually tied with Maple Park Kaneland earning themselves a third straight title. The Eagles on the other hand finished in a three tie for 4th.

The first rule in a team championship war is to score and score often. Dunlap and Cahokia have been atop of the Milesplit Illinois Power Rankings for virtually the entire season. They enter the state prelims #1 and #2. The field events is almost always the center of attention for a championship minded team. If you can bust a team in the mouth before you hit the track, it increases the opportunity for momentum and that means points.

Cahokia will lead off with star senior Mariya Hudson and sophomore LaQwasia Stepney in the long jump. Hudson enters with the 5th best mark at 19-0. She sits behind great notables Erika Furbeck (Jr., Geneseo) and Imani Carothers (Jr., Chicago Brooks) who are 2nd and 3rd. Assuming those two go 1-2 that means points for the Lady Comanches will be diminished. Stepney ranks 8th overall but has the 4th best mark from sectionals at 18-8.5. The only field event threat that Cahokia has is junior Tamadja Rodgers in the triple jump. Rodgers is just 9th ranked from the sectionals. A deep cast of competitors including defending champion Carothers is in the field. Dunlap will deploy junior Aanise Sajna in the triple and long jump. Sajna is expected to score as she ranks in the top 5 in both events. Dunlap junior pole vaulter Sydney Bertschy could be the tipping if she can eclipse her personal best 12-0 which ranks #4 in the state. Rising star Kiara Pauli will anchor both the 4x1 and 4x2 and work the straights in the open 100.

Please open up the track-

PV: With defending champion Ali Munson (Sr., Lisle Benet Academy) moving up to 3A lends an opportunity for Aliyah Welter (Jr., Monticello) who recently copped the #1 position in the state vaulting 13-1. We could see two vaulters over that tall measuring stick. Co -sectional leader Cierra Kuipers (Jr., Kaneland) will be right there as will Josie Held (Jr., Mt. Zion). The top six girls will return next season.

TJ: Jayla Campbell (So., Rich Central) won the Thornridge Sectional over Imani Carothers last week. But to be fair to Carothers, she only took one attempt to concentrate on her other three events. Carothers has saved her legs to leap into the record books this season. Look for her to sail past 40 feet. This event is strong up top but there are only four competitors over 37-0.

DT: Moore is the list leader by 7 feet over Mikenna Wilson (Sr., Charleston). A toss around 140-feet may just take home the scoring title.

100: The only better than Katina Martin (Jr., Decatur Eisenhower) in this event this spring is her twin sister Tina. Tina strangely did not entered in the event. It seems like the Martin twins would have linked together event by event since their relays are not very strong. The quest for a state trophy will now turn to being an upset player. Hudson has done well in this event, winning it as a sophomore enroute to a triple crown. Kiara Pauli is a name mentioned earlier that will have an impact on the race.

100HH: Stepney has the better time entering state over Carothers. That only means the Saturday clash should be interesting except for one thing. The hurdles race is Carothers' best event for state leader at 14.12. Carothers has indicated that she wants a wind legal state record. The warm weather is certainly going to be there but say may be the wind in terms of a push. Vicky Ignacik (Jr., Norridge Ridgewood) is someone ready to drop down near 14.50 this weekend from 14.70.

800: Abby Fioresi (Sr., Aurora Central Catholic) picked the right time to run her best race of the season at sectionals. She clocked the fourth fastest time in the state (2:13.84) and that will pit her in the line of fire of the defending champion Rachel Hickey (Jr., Lasalle-Peru) who ranks #3 in the state. Brooke Delahanty (Jr., Aurora Rosary) hung tight against Fioresi at sectionals and earned herself the second fastest time heading into state.

400: This may be the event in the entire state prelims to watch. Defending champion Elizabeth Drab (Sr., Arlington Heights St. Viator) feels a certain type of way in that she is being pushed aside for newcomer Tina Martin and others. No disrespect to Drab but there is going to be a very fast time on Saturday. Mariya Hudson is excited about the prospect of runnin under 54 seconds. Raven Moore (So., Springfield High) ran 56.38 at sectionals. The emerging star seems to be ready to challange. Martin appears ready as well. Hopefully Drab is too.

300H: Last year at this time after Grace Cronin (Fenwick) won her long over due title, the talk immediately turned Jade' Mayes (Sr., Chicago Westinghouse) as the heir apparent. That has not happen... not at as now year. Another emerging athlete in Karyn Best (Jr., Wheaton Academy) was out of sight and mind training extremely hard in tough summer conditions. The results have been chiseled so far with the second best time in the state. The 43.98 has brought attention to more than a few coaches and competitors.

1600: McLaughlin has the classification's top mark of the year in 5:00.69. Her teammate senior Delaney Appino dominated cross country finishing second. It was a little odd to not see her name on the performance list in the 3200m. Look for Boylan Catholic to go 1-2 if no one steps up. Fioresi could be a key player here. She placed third year in 5:00.

200: Another good sprint battle to be watched closely. This will be Hudson's possibly last high school race and the key to Cahokia's fourth state championship. The Martins will be out to show they will be on attack to beat Hudson. Moore is listed very high going into Charleston.