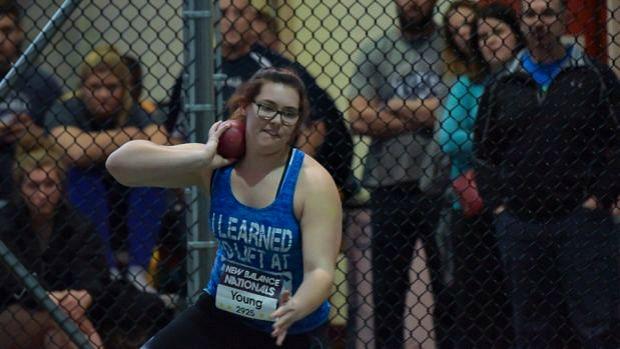 The state championship has arrived and once again Class A girls will lead things off inside of the welcoming O'Brien Stadium on the campus of Eastern Illinois University. Thursday is prelims day and the smallest classification will get the stadium and town all to themselves.

The team battle will be interesting to say the least.  It is going to take a team effort to obtain one of the three sacred plaques. Warrensburg-Latham does a superstar athlete but they also have dependable relays and complementary support. St. Joe Ogden is the ultimate team which is going to need every single point they can muster. Luther North and St. Anthony will fight to earn the #3 slot.

KD Young will be the center of attention from the field-

Let's make no mistake about it Class A has a few superstars on its roster that will rival the larger classificatons. One such individual is supreme thrower Kathleen Young better known as KD Young. KD is a senior from Warrensburg-Latham will lead off with the shot put where she is undefeated against state competitors in her career. That fact should remain intact after this weekend. Since there will be little resistance for the University of South Carolina bound Young, perhaps the only motivation will be to tie former star Kelsey Card (Carlinville) in state titles at four. Or extending the all-time state meet record 51-0 or becoming the first girl to toss the iron ball outdoors past 52-feet. Or how about improving her US#2 50-10 standing now that friend Alyssa Wilson (Sr., Donovan Catholic, NJ) set the national record 57-1.25 last weekend? But more than anything it will be the last time among peers and fans in Illinois that will mean the most to Young. The sectional leading mark 48-1.5 will catch some serious eye attention from Chloe Lindeman (So., Fulton) who threw IL#3 47-5 .

The discus is not Young's strong suit but the 157-7 is the state leader and US#18. At sectionals she tossed the plate a solid 152-feet putting nearly 16 feet clear of Emily Offenheiser (Jr., Stockton). The state all-time record by Card is 167-4 was once thought to be safe for a long time may be touched. 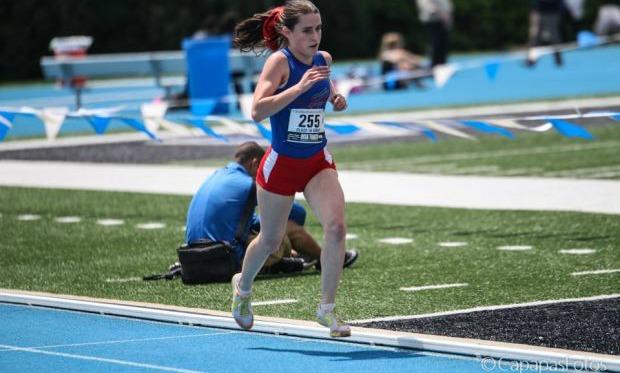 Anna Sophia is an all-timer in her own respect-

Anna Sophia Keller (Sr., Effingham St. Anthony) is a big time distance runner in her own respect and many fans know this. Even during a difficult junior year that saw hip injuries threatened to derail her legacy, Keller still dominated her competitors. It does not matter that she is in the smallest competition division, foes from far and near know they have a challenge on their hands. Keller has lost once to an Illinois girl in the 3200m. This season Keller has quietly run IL#2 10:26.76, winning by over two minutes and lapping the second place finisher. The championship will be stronger with the likes of Daly Galloway (Sr., Dwight) and Claudia Magnussen (Sr., Pana). Both girls have run under 11:00 and should challenge Keller for a few laps.

If only Keller could pick what division to run in for the 1600m. She has never lost in this event indoors or outside. Don't expect that to change this weekend when you consider her season best 4:54.92 is the fourth fastest time in the state. It is a mark that was not conceived against stellar competitors either. Keller may just opt for the easy against Magnussen and Galloway and stay fresh if her team's top rated 4x400 relay makes the state final. That means a team trophy aspiration is a possibly.

4x800: There are only two teams under 10:00 during the outdoor season, but that should change as all of the best teams from indoor advancing to Charleston. Knoxville leads with a 9:51.12- St. Joe-Ogden and Chicago Christian are just several ticks seconds back. Indoor champion Champaign St. Thomas More has a season best 10:03.94 and will be loading up for the kill this weekend.

4x100: This is an important event for classification leaders St. Joe-Ogden and Warrensburg-Latham for several reasons. They are both fighting for a state title and 10 points would go a long way toward that goal. SJO has run 49.71 this season followed by 49.90 at sectionals. Warrensburg is not far behind at 50.27.

4x200: Warrensburg is the class leader at 1:46.14 achieved during the sectional round. Once again it will be important for the Cardinals to come up aces in the trophy chase. St. Joe-Ogden has the second best time of 1:47.99 followed by Pana.

4x400: It was mentioned earlier that St. Anthony has a strong relay if Anna Sophia Keller is on it. It may come down to this event for either a state trophy or a state championship for St. Joe-Ogden and St. Anthony. The term "showstopper" may be just that on Saturday.

100: defending champion Courtney Sockwell (Sr., Rockford Lutheran) for some reason has not been as dominant as one expected. Her best time this season is 12.52 only rates 12th best in the classification. This is not a good prognosis along with getting beat by Bella Uscila (Jr., Elgin St. Edward) at sectionals. Classification leader Taylor Larson (Jr., Bushnell-Prairie City) finished low among the state qualifiers and may not be a factor. Seven Hicks (Fr., Peoria Heights) on the other hand is the list leader and may be the one to watch along with mainstay Jada Williams (Sr., Chicago Luther North).

100HH: Parker Francisco (Sr., St. Joseph Ogden) won the indoor title and is the class leader (15.08) with just one loss on her resume this season. The goal is winning a state title and with team aspirations in tow motivation will not be hard to come by. Sectional leader Danielle Taets (So., Orion) is standing in the way with a solid 15.14 clocking. And then there is high jump specialist DaeLin Switzer (So., Decatur St. Teresa) looking to give Francisco another loss.

800: The two top finishers are back once more to duel in Arielle Summitt (Jr., Urbana U High) and Audrey Harrod (Sr., Hinckley Big Rock). Summitt has the classes best mark and Harrod is the sectional leader. Look for Harrod to make a battle ouf of this year and possibly improve down to 2:14.  Summitt's 2:16.25 was run at the loaded Palatine Distance Night last month.

400: Junior Rebecca Waite of Milledgeville has led coast to coast here during the outdoor season in 58.59. No one else has broken 59.00 thus far on the season. Emma Henderson (Sr., Tuscola) may just be that girl to end Waite's streak.

300H: The top three times on the season occurred last weekend at sectionals. Morgan Achison (Sr., Seneca) leads the way with her 45.57.

200: Taylor George (Sr., Warrensburg-Latham) may respresent her team's last opportunity to score points in the chase for a state title. Hicks will be a key figure in stopping such threats as well Sockwell and Uscila. George and Hicks have the time marks from sectionals at 25.47.

LJ: Tarynn Mays (Sr., Duquoin) is the sectional leader at 17-8. She won the Illinois Top Times title and will look to add the all important outdoor crown to her mantle. Brittney Oakley (Fr., Warrensburg-Latham) jumped 17-7 during the regular season qualified for state.

PV: Emma Meyer (Sr., Central A&M) enters with the sectional's top mark at 11-9 but Kristin Slaughter (Sr., St. Anthony) is the class leader and IL#4 12-0. Slaughter placed 2nd last year and she missed the Top Times meet due to illness, so the motivation to be on top in the end will especially be a motivation.

TJ: Mays leads here as well with a 37-2 class best, but Taets is the sectional leader with a 36-11.5 mark. Mays is more than a foot back entering the state meet, but no one knows for sure if she took all of her attempts.