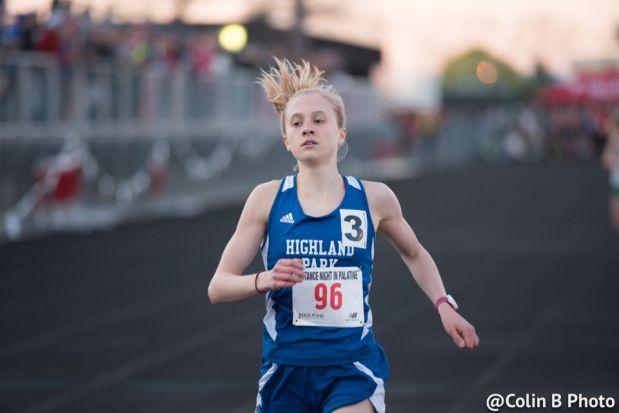 We all love distance running, but sometimes we overlook things that may be less than "championship" variety. Such was the case of the opening 1600m races on the undercard. St. Charles East senior Emma Battin used a strong finish to turn back several challengers and establish a new record for the open race 5:16.86.

The elite section 1 of the girls 3200m saw Hoffman Estates senior Misbah Baig assert herself early and not face any resistance in winning easily in a personal best 11:32.55. The selfless Baig praised her teammates afterwards saying she is looking forward to joining them in an attempt to qualify for state in the 4x800.

Chelsea Pawlak (Sr., Deemak) came in looking for a personal best -- being that she plays volleyball in the fall instead of running cross country. The end result was a career effort and new school record in the 800m by three seconds (2:19.75) and a section one victory. The next race was perhaps the biggest surprise of the evening.

Things were expected to heat up on the track York sophomore Sarah May in the section 2 line up. Instead, it would be a complete unknown freshman named Stephanie Kriss that stole the entire show. The newcomer from Highland Park had only run 2:22 coming in. In addition, Kriss was injured much of the cross country season so her resume was light. When the opening 400 reached in 64 there was a strong possibility of a very fast time.

Kriss opened daylight on the field and cleared 1:37 at 600. The end result was a state best 2:12.83. As it turned out later in the main event elite section 3 despite a strong finish by the favorite Rachel Hickey (Jr., Lasalle-Peru) she was not able to reel in Kriss' mark with her 2:13.69. Surprises is what make the sport of track and field great.

The main event races continued with Sarah Barcelona (So., Lyons Township) surged to a sizable lead mid-race in the 3200 and appeared to be on her way to a new meet record held by Dakota Roman of Batavia who ran 10:42.38. On the final lap Barcelona began to tire and run heavy legged. Danielle Osmon (So., Grant) made a push to catch Barcelona. The big kick by Osmon fell just short and Barcelona prevailed 10:43.80-10:45.78.

The girls 1600 elite #2 was supposed to be a race that spawned numerous runners under 5:00. But a sluggish first half 2:29 prevented that. Hersey senior Sarah Harden led a portion of the race before Maine South Olivia Niziolek took off in the night with her dark colored uniform. When she emerged and entered the crowd waiting for her on the homestretch and a big victory in 4:54.85.