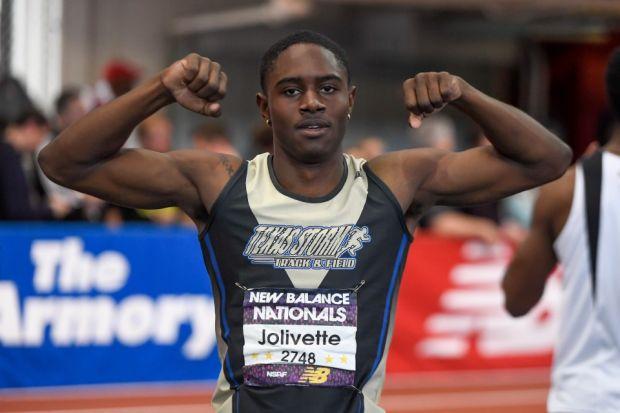 The New Balance Indoor Nationals has ended. I feel like this meet is a lot like the X-Men who live at Westchester Mansion or better known as the Xavier Institute for Higher Learning. The majority of the athletes at New Balance have mutant powers or abilities most athletes or teammates around the country don't have.  New Balance is where the great athletes or mutants meet for one weekend to test their abilities against each other, compete, and learn valuable lessons that will carry them the rest of the season. In past years, I've been disappointed in some of Illinois' performances at the big show but this small and mighty contingent from Illinois this year impressed me.  I'm really hard to impress!
The Emerging Elite Division kicked off last Friday morning. Ronald Reed, Jr. (Decatur MacArthur) had a breakout performance winning his prelim heat of the 60m with a PR of 6.95. This is despite an ankle injury he has been dealing with. In the final, the ankle cost him a spot on the podium. Ron still ran 6.97 and took 9th. Elizabeth Drab (Sr., Arlington Heights St Viator) took 3rd in the 400m with a 55.90. Elizabeth put major pressure on the field. I barely caught her race but witnessed a good show. Arielle Summitt (Jr., Urbana U-High) with a 2:16.07 placed 10th and Jenna Diers (Sr., Lincoln-Way West) took 12th in 2:16.21. Both ran impressively.
The Championship Division provided even more great performances as veteran senior Jaimie Robinson (Homewood- Flossmoor) gave us a huge 41'8 ½" in the triple jump and placed 3rd ending her New Balance indoor career as she heads to Alabama next year. Senior K.D. Young (Warrensburg-Latham) faced her toughest competition of the season and placed 2nd with a monster throw of 51'9" in the shotput.
Marcellus Moore (Fr., Plainfield North), as I said in last week's column, would learn a lot regardless how things went. Marcellus ran and qualified for the Emerging Elite Division 200m final but ran out of his lane and it cost him big. Marcellus dug deep and bounced back in the Championship Division, after facing the great sophomore Tyrese Cooper of Miami in the prelims of the 60m, and placed 9th in the 60m final.  It was a rollercoaster ride weekend for Marcellus but I personally think he will learn a lot from this experience.

Supreme hurdles champions Trey Cunningham and Tara Davis share amazing pleasantries (Bryan Deibel photo)
There were a lot of highlights for me. I had already seen Cooper  this past summer in Houston for AAU Nationals. Tyreese will be a problem for years to come. I also got to see New Jersey legend Sydney McLaughlin in the 400m. She ran so easy and she'll be one of America's greatest when she's finished. I also got a chance to watch and meet California's Tara Davis who will be headed to the University of Georgia next year. I watched her prepare and put on a show in the long jump with a 21'03" jump. I had just watched her run the hurdles versus the pros in the USATF Championships the weekend before on TV and then got a chance to meet and talk to her. The performance of the meet was watching junior Mondo Duplantis (Lafayette, LA) go 19'1" in the pole vault. He broke the national record. It was the highest vault in history by someone under 21 years old, it broke the Armory record and he became the 7th ranked vaulter in the world. Mondo is a beast! 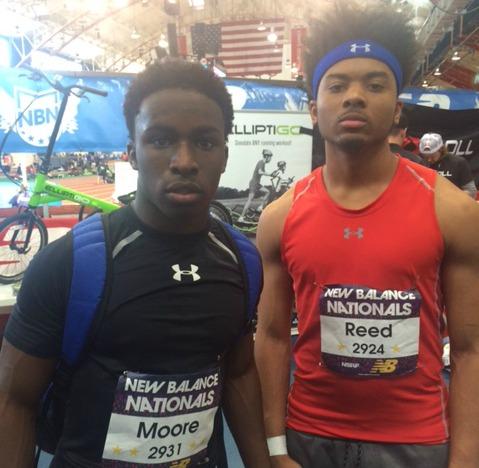 Marcellus Moore and Ron Reed are two of the state's elite (Bob Jelks photo)
This was a great meet with huge performances but B-Side is going to put it out there a year in advance.  Illinois has some great athletes and I want some of our best to come to New York next year and cause havoc. I need athletes like Imani Carothers (Jr., Chicago Brooks) to come on! Imani's 19'3" jump this year would have won the Emerging Elite Division (18'10 ½"). She would have been 7th in the Championship Division. We all know she can hurdle. Katelynne Hart (Fr., Glenbard West) freshman, is another one. Katelynn's 2:15.15 800m would have been 7th in the Emerging Elite and Illinois' great shot putter, John Meyer (Jr., Lockport) who has thrown 64'2" would have been 4th in the Championship Division. So start saving up now! There are New Balance crowns to be won in 2018.
Shout out to past Illinois greats Savannah Carson (Purdue) who placed 5th in the NCAA meet in the long jump and Miami Hurricane Brittny Ellis who placed 8th in the 400m.