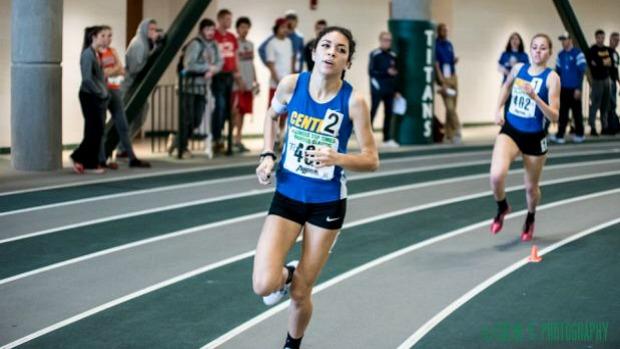 As an upstanding member of the Aurora Central Catholic cross country and especially track and field teams, Karina Liz was one of the most feared competitors whenever she laced up her spikes and toed the line. She was one of a handful of runners in IHSA history that earned all-state honors in cross country, sprints (400m), and middle-distance (800m). At ACC, Liz won three Illinois Top Times 800m titles as well as two outdoors. Liz also earned All-American honors in the 1500m at the 2014 AAU Nationals. Liz is now a freshman at the University of Missouri. Liz has agreed to participate in our series titled "100 days in" where we attempt to capture some aspect of Liz's first semester of academic life, social, and athletic prowess.

How frustrating was it to not finish up your high school career with another state title in your favorite event the 800m?
My senior year state meet was filled with ups and downs.  It was exciting to get to the finals with my 4x4 team, and also be able to be a 4-time all stater in the 800, as well.  Though I wasn't able to cap off my high school career as I would have liked to (with a three-peat in the 800), I was excited to be able to have the opportunity to finish off my career in Charleston.  I wasn't as frustrated as I thought I would be, because after looking at how much I had accomplished in 4 years, I didn't allow myself to define my whole high school running based on my last race as a high school student athlete.
For the first time in perhaps many years you did not have direct contact with another competitive sport in the fall. Did it feel weird not running xc from a competitive standpoint?
It was very weird at first to not be running cross country from a competitive standpoint!  Although redshirting was hard at first,  it allowed me to fully recover from a hip injury that I got near the later part of the 2015 track season.  Redshirting also allowed me to focus on my training and my schoolwork, which made it easier to transition into college.
What goals do you have for yourself for your first few races? How about the indoor season?
My goal for my first few races is to just get back into that competitive mindset and relearn how to race again.  Indoor season I'm hoping to be a leg on the DMR, and break 2:08 in the 800m.
What has school been like? How is living in Missouri different than Chicago land?
School has been overall great!  Mizzou has been a perfect fit for me so far.  Missouri isn't too different from Chicagoland.  The only major difference is the weather; it's a lot more humid here!
What do you miss most about high school if anything?
The one thing that I miss from high school is probably having my car.  I didn't realize how much I would drive myself around. 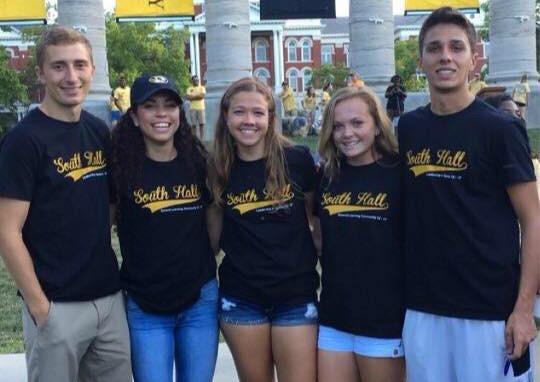 Karina Liz and teammate Michaela Hackbarth (next to Liz) hang out with teammates and friends
We hear your roommate is fellow state champion 800m star Michaela Hackbarth. If so, what has that relationship been like?
Yes, my roommate is Michaela!  Since the beginning of the year we have been really great friends!  It's weird how similar we are: we run the same race, have the same major (secondary education), and we are both from Chicago area.
You and Michaela raced only once against each other (NIKE Festival of Miles) in high school. You may be dueling every meet for the next several years. Any thoughts of building a competitive battle against peer/teammates?
I wish Michaela and I would have raced more in high school because it would have challenged us both to run faster, but I am looking forward to have a teammate to both train/run competitively.  I believe that in order to be the best, you must train with the best.
What is your favorite hangout spot on campus?
My favorite hangout spot on campus is the MATC (Mizzou Athletic Training Complex).  It has our training room, weight room, dining hall, study hall, etc.  A lot of the other student-athletes hang out there too, so it's a nice place to meet athletes from other teams.
What are you majoring in and what career goals do you have after your running career is over?
I am majoring in Secondary Education and thinking of focusing on Biology as of right now.  My career goal is to become a high school teacher and possibly coach track.  I'm really hoping that through education, I could positively impact the lives of my potential students.
We know that you had a "food vice" during the off season. What is it and do you intend on giving it up once the season is in full bloom?
My "food vice" is definitely chips and Dunkin' Donuts iced coffee.  I intend on making the effort of giving these up, the iced coffee will definitely be hard, but you got to make sacrifices in order to achieve your goals right!
Your competition schedule is LOADED with tough meets in a few nice spots. How excited are you to be able to have an opportunity to go to places like California, Louisiana, Texas, or South Carolina?
I am just excited to even be able to compete at the collegiate level!  Traveling to different places like California, Texas, Louisiana, etc and repping Mizzou is just a huge bonus!
Your first official collegiate race is finally in the books. How exciting and thrilling was it?
I was satisfied with my first college race performance.  I forgot how exciting racing was.  It was nice to be back on the track and to be able to run with Mizzou across my chest.  Overall, I believe that it was a good start to my indoor season, and I can't wait to see how the rest of the season unfolds.