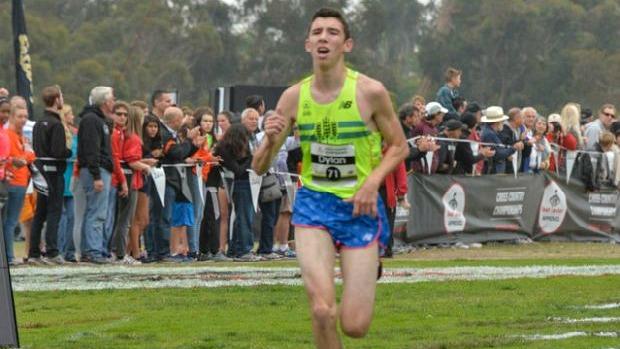 The 2016 high school cross country season has officially come to an end and it was a banner one for Illinois harriers. Orland Park Sandburg junior Dylan Jacobs and his crystal ball came up big. Jacobs led all state entrants with a 11th place finish in 15:21. Jacobs did not hold back as he challenged the pre-meet favorites for most of the race. The twice crowned All-American was just a tick back at the first mile in 4:47. Jacobs probably had a bit too much octaine when he overtook Seth Hirsch (Sr., Millard West NB) just before the 2k mark. The steep incline would eventually catch up to Jacobs who fought hard before falling back and maintaining his final verdict. Jacobs will be the top returning junior next year for a loaded Illinois junior crew that is expected to compete for top honors. The eventual winner was Reed Brown (Sr., Southlake Carroll TX). Brown used a perfectly timed kick down hill in the final quarter-mile to blitz pass Finn Gessner (Madison WI) and Hirsch for the win in 15:01... four other Illinois athletes competed in the national final. Jack Aho (Sr., Graylake Central) took 18th place with a solid closing effort in 15:35. The Lake Zurich senior duo of Brian Griffith and Matt Pereira finished 23rd and 25th place clocking 15:38 and 15:40. Matt Aho (Sr., Grayslake Central) closed out the Illinois contingent with at the 32nd slot running 15:49... Lindsey Payne (Jr., Glenbard West) was the lone wolf Illinois girl. Payne hung in the back of the race for at least half of the race before moving up methodically. She would fall short of an All-American honor by just one second. The 17th place finish in 17:58 ends Payne's season on a very good note. Payne had suffered several physical aiments throughout the IHSA season, but she was able to rebound at the FLMW Regional and complete a great season.