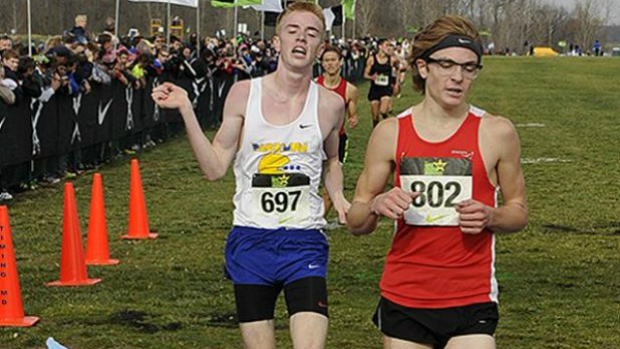 A couple weeks ago, I wrote a story about the fateful day in late October where our St. Ignatius team failed to qualify for the state meet.

However, that was not the final race I ran with the varsity team my senior year. That race would be the 2012 Nike Cross National Midwest Region, on the LaVern Gibson Championship Cross Country Course outside of Terre Haute, IN. That was the second year that we ran as a team there, actually, and I was looking forward to running in that championship race again in 2012.

I look back very fondly on that trip. The drive from the northside of Chicago, where I lived, down to Terre Haute, was about 4-5 hours of our Saturday together, meeting at the Hilton Garden Inn on 7th and Wabash in Terre Haute. That hotel is just a one minute walk from the Terre Haute Children's Museum, where the NXN pre-race party was that year. Where sectionals was our inglorious goodbye, the pre-race party at the Children's Museum was a re-welcoming to the XC scene for our team, and the recognizability new state-champion Jack Keelan meant a lot of other athletes approached our team. Martin Martinez, an all-state runner from Gurnee (Warren) who got to know Jack on a recruiting visit, walked around the party with us. I remember touching base with the O'Fallon team, led by Alex Riba, who would later stay at Jack's house the following June for the Midwest Distance Festival at Benedictine in Lisle. I caught up with Plainfield South's Dan Lathrop, whom I got to know at Wisconsin's Camp of Champions (shoutout to Lathrop, whose scoring performance helped Illinois qualify for the NCAA national meet today). We shook hands with Chris Derrick, and a sort of ceremonial passing of the guard occurred with Derrick, a recent graduate of Stanford, meeting Keelan, who would be attending Stanford the following fall (although we did not know Keelan's commitment yet).

I also have distinct memory of standing behind a team wearing matching navy warmups. We figured they were a team from a different state, because we did not recognize any of the faces, but we knew the name on the back of their jackets: Saint Ignatius Cross Country. That was us! Well, almost us. Saint Ignatius OH, which is an all-boys Jesuit school (as opposed to co-ed Chicago St. Ignatius) is always one of the best teams from Ohio, and we thought it was pretty awesome that we were standing next in line to a team from so far away. But this is the magic of NXN!

The race the next day was fun and memorable (although please do not look for me in those results), and even the windiness at a bumpy LaVern Gibson cross country course couldn't curtail a true day of Cross Country. Runners from the great Midwestern states will race against each other and vie for five individual qualifying positions and two team qualifying positions (with the potential for two at-large bids as well). Here, we will take a look at Illinois' prospects at Nike Cross Nationals this coming Sunday.